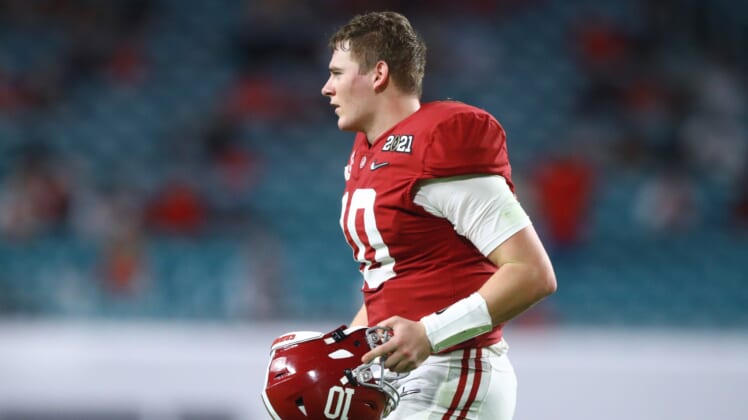 Pittsburgh Steelers draft picks are going to be of utmost importance this coming April after having seen the Baltimore Ravens and Cleveland Browns pass them up in the AFC North.

General manager Kevin Colbert needs to find a happy medium between continued contention and building from the future. That includes potentially finding an heir-apparent to Ben Roethlisberger at quarterback.

Outside of the quarterback position, there’s needs at tackle, center and cornerback for Pittsburgh. A team that rarely makes a statement in free agency, getting impact players at these positions is going to be important.

It’s in this that we look at the Pittsburgh Steelers draft picks for 2021 while giving some options for the first three rounds before providing you with a full seven-round mock draft.

Entering his Age-39 season, there’s no telling how much longer Ben Roethlisberger is going to play. In fact, recent reports suggest that Pittsburgh won’t bring him back in 2021 at his current salary cap cost. While that will remedy itself, this seems to suggest that the Big Ben era in Steel City will soon come to an end.

If so, general manager Kevin Colbert will finally have to exhaust that first-round pick on an heir-apparent. It’s something he’s pushed back against in recent years. Here, we look at reigning Heisman finalist Mac Jones as a possibility. Sure there’s some physical limitations in the 6-foot-3 quarterback’s game. Even then, Jones is coming off a brilliant final season with Alabama and can make every throw on the field. He’d be a perfect project behind Big Ben for a season or two.

If Pittsburgh were to look in another direction, cornerback and offensive tackle remain needs. Mike Hilton and Cameron Sutton are slated to become free agents. Fellow cornerback Joe Haden is getting a bit long in the tooth. The 6-foot-3 Melifonwu fits the physical type cover guy Pittsburgh covets. Meanwhile, starting left tackle Alejandro Villanueva is slated to become a free agent. Even if he were to return, Cosmi could play right tackle or guard out of the gate.

Recent reports suggest that future Hall of Fame center Maurkice Pouncey could retire after 11 seasons acting as a lynchpin of the Steelers’ offensive line. If that is indeed the case, Pittsburgh has to think long and hard about Alabama’s Landon Dickerson in Round 2. Sure Pittsburgh Steelers draft picks are big this year given the success we’ve seen from Baltimore and Cleveland in the AFC North. But center is of huge importance in this offense.

There’s also an argument that can be made regarding linebacker. Vince Williams has slowed down some next to team leader Devin Bush, who suffered a torn ACL last season. Considered by many to be a potential top-20 pick heading into the 2020 college football campaign, Moses would make sense here.

If Pittsburgh were to pass up on corner in the first round, Samuel Jr. would make a ton of sense. Despite his lack of size (5-foot-10), the young man is seen as a true shutdown corner. He also has the ball skills to play outside, even in Pittsburgh’s physical defense.

There’s more than a good chance that Pittsburgh opts to find a long-term solution at left guard. Given how deep this class is at that position, waiting until the third round makes sense. That’s where Meinerz, a small-school product who was the talk of Senior Bowl week, makes sense. He could be a plug-and-play guard at the next level.

I am also intrigued to see if Colbert goes back to the drawing board with a mid-round quarterback prospect after the failures of Landry Jones and Mason Rudolph. If so, Mills could make a ton of sense for the Steelers. Even after playing in just 14 combined college games with Stanford, he’s a fast riser leading up to the draft. He’s also your prototypical quarterback in the mold of Big Ben at 6-foot-4.

This would actually be the best of both worlds for Pittsburgh. Picking up Jones in Round 1 makes sense in that it would enable the former Alabama star to sit behind Big Ben for a season or two.

Meanwhile, the Steelers also add immediate-impact players in that of Samuel Jr. and Adrian Ealy. At least initially, Samuel could play the slot with Ealy potentially moving in as the Steelers’ right tackle before eventually taking over for Villanueva on the left side.