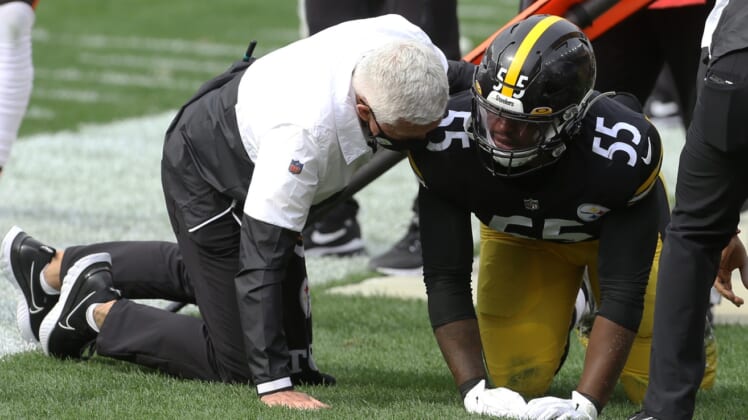 Oct 18, 2020; Pittsburgh, Pennsylvania, USA; Pittsburgh Steelers inside linebacker Devin Bush (55) is assisted by a team trainer after suffering an apparent injury that forced him to leave the game against the Cleveland Browns during the second quarter at Heinz Field. Mandatory Credit: Charles LeClaire-USA TODAY Sports

Devin Bush and the Pittsburgh Steelers were feeling good about themselves Sunday afternoon after disposing of the Cleveland Browns by the score of 38-7.

A weird season that has already included the Steelers having a game postponed due to COVID-19 took another turn following said win.

Bush exited Sunday’s game with a knee injury. The Steelers initially indicated that he was questionable to return before ruling the former first-round pick out for the remainder of the game. The initial diagnosis is not good.

As ESPN’s Adam Schefter notes, this will cost Bush the remainder of the 2020 NFL season. It’s an absolutely brutal blow for the Steelers.

A product of Michigan, Bush was the No. 10 overall pick back in 2019. He ultimately recorded 109 tackles (72) solo, nine tackles for loss and two interceptions during his rookie season. Thus far as a sophomore, Bush had been playing at a Pro Bowl level.

Not only is Bush one of the young faces of the Steelers’ top-notch defense, he’s the play caller on the field. This is certainly a major backdrop with Pittsburgh set to take on another undefeated team in that of the Tennessee Titans in Week 7.

At this point, former college safety Marcus Allen or young linebacker Robert Spillane will take over starting duties for the Steelers.

However, there’s also a chance that the Steelers look for a proven starting linebacker ahead of the Nov. 3 NFL trade deadline. Avery Williamson of the New York Jets and Jon Bostic of The Washington Football Team come to mind first.

Either way, this is a massive blow for Mike Tomlin and the Steelers. It will be interesting to see how one of the NFL’s top defenses responds to this bad news. We’ll find out soon enough.