With the NFL season getting closer by the day, that also means football fans will soon have a new video game to play in the form of Madden NFL 23. As the only football video game with official NFL licensing, EA Sports has been slowly revealing details of their latest release, which brings us to the Madden NFL 23 ratings reveal.

To help memorialize John Madden and the impact he had not only with the production and development of the Madden video game series over the years, the Hall of Fame coach will grace the cover of both the regular copy and the ‘All Madden Edition’, which features additional in-game content for features such as Madden Ultimate Team as well as the ability to play the game three days earlier than it’s official release.

The official release date for Madden NFL 23 is set for August 19, 2022. It will be available on Playstation, Xbox, and Windows (PC). The price starts at $69.99 for next-gen consoles such as the PS5 and Xbox Series X/S. The price starts at $59.99 for the previous generation and PC versions. Madden can be pre-ordered right now, if you like. But copies of the game are never hard to come by.

Everyone wants to know how their favorite players and teams stack up to the competition. What do the rookie ratings look like? Who are the highest-rated players at each position? Let’s dive into the annual Madden NFL 23 ratings reveal.

Cooper Kupp may have outpaced every other receiver in football in 2021, leading the NFL in receptions, yards, and touchdowns, en route to winning Super Bowl MVP. But no, he’s not the best WR in Madden. Instead, that honor goes to new Raiders star Davante Adams. It’s something Minnesota Vikings wide receiver Justin Jefferson would have to agree with.

We used to see Julio Jones in the top 10 every year, but that no longer is the case in 2022. He hasn’t even signed with a team yet and remains a free agent. It should also be noted that Michael Thomas and Tyler Lockett also received a 90 overall rating. They are technically in the top 10, too.

Whether you agree or not, Madden deems both DK Metcalf and Deebo Samuel to not be worthy of a top-10 ranking. Both received an 89 rating. Ja’Marr Chase is also a notable snub, as an 87 overall, or the 18th-best player at this position, which has to be a joke.

Despite being the top-drafted player at his position, Drake London is rated as the fourth-best rookie according to EA Sports. Yet, Jameson Williams’ stock may have slipped a bit in the draft from teams being unsure how quickly he’d be able to contribute in his rookie season.

Meanwhile, the Madden ratings team also clearly thinks highly of George Pickens. Despite being the 11th receiver taken in April, he’s the sixth-best rookie. Noticeably absent from the top 10? Green Bay Packers’ second-round rookie Christian Watson, who has freakish athletic abilities, but is expected to be a bit raw right away.

As usual, Travis Kelce steals the show. But George Kittle isn’t far behind at a 97 overall. Both tight ends can do it all and are top targets for their teams. It’s hard to place one too far above the other.

A fixture here for the past decade, Rob Gronkowski’s retirement allows for gamers to become better acquainted with some of the other top tight ends on the gridiron.

But there are plenty of other great players at the position. That includes Darren Waller, who’s become a popular choice in Madden thanks to being an absolute speed demon. It’s also interesting to see Kyle Pitts already ranked sixth after just one year in the league. But after going for 1,026 receiving yards as a rookie, it shouldn’t surprise anyone.

One player missing from the top 10 is Dallas Cowboys tight end Dalton Schultz, who received the franchise tag this offseason — earning him a one-year contract that makes him the third-highest-paid tight end in football in 2022.

The top rookie tight end is Trey McBride of the Arizona Cardinals, who will have a 73 overall rating at launch.

Despite an absurd 22.5 sacks last season, and leading the league the year before, TJ Watt did not get the top spot when it comes to edge rushers in this year’s version of Madden. That impressive honor went to Cleveland Browns star Myles Garrett. Both men moved up a spot from last year with incumbent rushing demi-god Aaron Donald getting ranked under the defensive lineman category in 2023 as opposed to an EDGE rusher.

Compared to last season, we saw a major jump up for the Bosa Brothers. 49ers star Nick moves all the way up to No. 3 with a 94 rating after being eighth last season. While Joey went down one point but still bounced up from nine all the way to sixth. 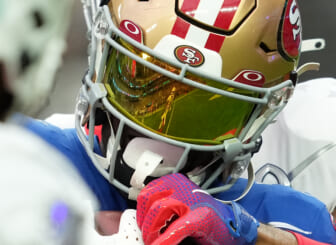 Another notable exclusion for the 2023 version of the game is Steelers rusher Cameron Heyward. He was also moved to the DL category with Donald where they reside in the top three of those rankings.

While the Cleveland Browns could be without big-ticket acquisition Deshaun Watson for all of this season, Madden fans will still have a top-rated running back at their disposal in the 2023 version of the game with Nick Chubb as a 96.

However, the top spot once again went to the all-mighty force this Derrick Henry, who earned a rating of 97. He is followed by Panthers star Christian McCaffrey with 96, and then Chubb. The league’s top rusher in 2022 Jonathan Taylor is the fourth highest rated rusher at 95, then Vikings back Dalvin Cook rounds out the top five with a 94.

Here are the best safeties in Madden NFL 23.

The Madden ratings continue to provide some surprises and head-scratchers. Tyrann Mathieu being the top safety in Madden 23 is a bold decision, given his diminished play in 2021 and the limited interest in him during free agency. It’s also more questionable when you consider Kevin Byard and Micah Hyde came in much lower.

Moving further down the list, the inclusion of Jamal Adams is baffling. He is an excellent pass rusher and plays the run well, but he does practically nothing in coverage. It’s hard to believe a more well-rounded safety like Adrian Amos couldn’t be pushed ahead of Adams.

The defensive lineman category in Madden NFL 23 sees a major shakeup compared to 2022. Several of the top 10 rated linemen from the previous game did not make the cut this year and a few from the EDGE rusher position were switched to this group. Leading the way in 2023 in superstar Aaron Donald with a fitting 99 rating.

The top three cornerbacks from last year’s Madden NFL remain in their spots for 2023. However, after elite CBs Jalen Ramsey, Jaire Alexander, and Tre’Davious White, there was a bit of a shakeup. Most notable of which is Eagles star Darius Slay, Jr. moving from nine in 2022 all the way up to fourth in the new game with a rating of 92.

In 2023, the notable exclusions include the Raiders’ Casey Heyward, Jr., and Dolphins talent Xavien Howard. They are bounced from the list with the arrival of Marshon Lattimore and his sixth-best rating of 91, and Falcons star AJ Terrell who rounds out the top 10.

Old-man river himself Tom Brady is back in the top spot among QBs in the 2023 version of Madden NFL, with an impressive 97 rating. Which is one point up from his number last year. Up from the third spot in 2022 is last season’s league MVP Aaron Rodgers with a 96 rating. The same number he had in Madden NFL ’22.

The player who took a major jump up is Bills superstar Josh Allen. Last year he ranked eighth with a rating of 87. In 2023, he moves all the way up to the four and improves to a rating of 92, after a stellar 2022 season.

Kyler Murray, Deshaun Watson (unsurprisingly), and Ryan Tannehill fell out of the top 10 this year. In their place is the QB for the Super Bowl champion Rams, Matthew Stafford. His opposing signal caller in last year’s big game, Joe Burrow, as well as young gun Chargers quarterback Justin Herbert.