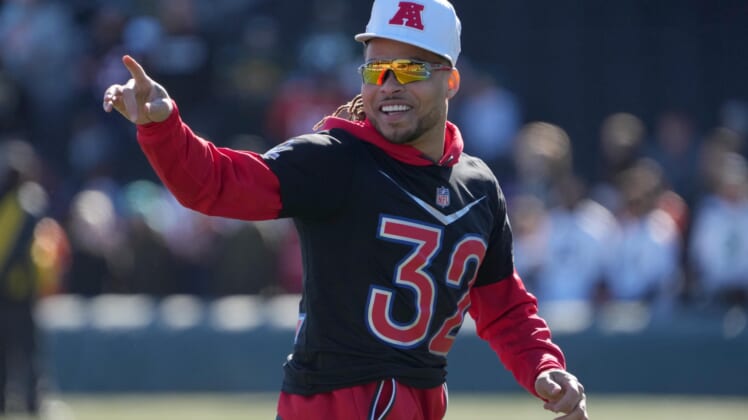 With the offseason in full swing, NFL jerseys are selling as fast as ever. We’ve seen the Russell Wilson trade spark a jersey-buying frenzy in Denver, but that’s merely the tip of the iceberg. There’s a lot more player movement that will surely lead to empty shelves wherever football memorabilia is sold.

We’ve seen evidence of that with the 2022 NFL Draft taking place, dominating the top-10 in recent sales.

From August 1-September 7, Buffalo Bills star quarterback Josh Allen had the top-selling jersey according to NFLShop.com. But now that the regular season is complete, he has slipped out of the top ten.

While the playoffs were still underway, Fanatics revealed the top-selling NFL jerseys throughout the season, which included some interesting names featured in the top-10 of most popular jersey sales.

Here is a list of the top-selling NFL jerseys right now, which includes several rookies.

In a way, the Houston Texans have their face of their franchise, for now. Unless you’re completely sold on Davis Mills, buying a Derek Stingley Jr. jersey is the safest bet for Texans fans. With the potential to be a shutdown corner, Stingley offers a lot of intrigue.

After going with defense with their top pick in the draft, the Jags once again turned to the front seven by selecting linebacker Devin Lloyd with the 27th pick in the 2022 NFL Draft. Fans are thrilled with the choice, as Lloyd’s jersey is one of the most popular in the league as of late.

Get your Devin Lloyd jersey before the others

Now that the Jacksonville Jaguars have the No. 1 pick in back-to-back draft classes, it may be hard to choose which jersey to buy. After Trevor Lawrence last year, now with Travon Walker, at least Duval has a top pick on the defensive side of the ball to go with Josh Allen too.

The New York Jets got coach Robert Saleh his lockdown cornerback with the No. 4 selection in the 2022 NFL Draft, grabbing Ahmad “Sauce” Gardner out of Cincinnati. He enters the league with a lot of swag and plenty of confidence. Gang Green will love him.

Now that the New York Giants believe they have pass-rusher capable of wrecking the game with Kayvon Thibodeaux, fans are rushing to secure their chance at buying one of his rookie jerseys.

Stroll the Big Apple in a Kayvon Thibodeaux jersey

With Kyle Pitts and now Drake London, the Atlanta Falcons will have some massive pass-catching targets for Marcus Mariota and Desmond Ridder to enjoy going forward. With Calvin Ridley out for the year, London figures to receive a large target share.

Flock to the stadium in a Drake London jersey this fall

Watch out NFC East. Now that the Philadelphia Eagles have paired De’Vonta Smith with A.J. Brown, this offense is expected to take a major step forward. Fans are pumped to have a tip-top receiving corps in Philly.

The Detroit Lions do have a new face of the franchise and his name should be quite familiar to local fans of Michigan. As the No. 2 overall pick in the NFL Draft, Aidan Hutchinson is poised to make a large impact both on the football field and in the community. Opponents should invest in kneecap protection around this guy.

As the expected heir apparent to Ben Roethlisberger, the Pittsburgh Steelers have landed on Kenny Pickett to take the keys to their offense. First, he’ll have to beat Mitch Trubisky for the gig, but Pickett will receive every opportunity to do so from the jump.

It’s clear New Orleans Saints fans are excited about Tyrann Mathieu coming back home to the state of Louisiana, where he became a hero with the LSU Tigers. As The Honey Badger said, it’s where he wanted to be all along. Mathieu’s official jersey number is not yet set, but fans can pre-order it and the jersey will ship once the number is finalized. Even without his digits set, Mathieu has the top-selling uniform of all NFL jerseys right now.

Top-selling NFL jerseys for all 32 teams

If you didn’t see your favorite player included in the top ten, you’ll find your team’s most popular NFL jerseys right here.