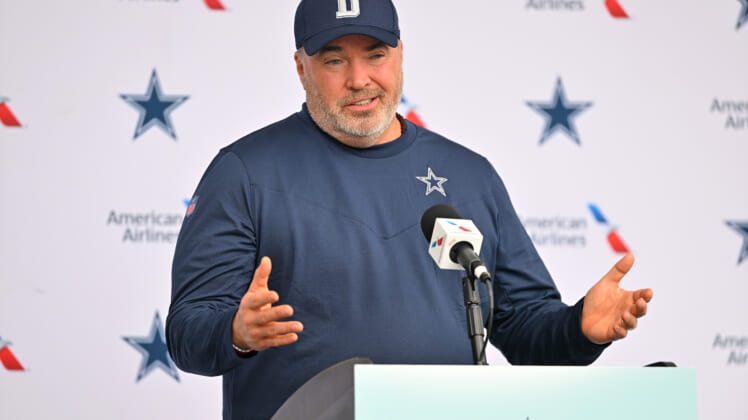 The NFL has 32 head coaches all leading their respective organizations. Every coach currently has the same win percentage in 2022, but not each one enters the year on even ground. Here’s your NFL head coach hot seat meter with the regular season a month away.

NFL coaches with nothing to worry about

Ranked in order of coaches with the most job security to those with the least, we know the only way Sean McVay moves on from the Los Angeles Rams is if he decides to take a TV gig. No matter what happens, the Rams wouldn’t move on from McVay one after winning a Super Bowl.

Andy Reid is a coaching legend, especially so in Kansas City, where he’s tied at the hip with Patrick Mahomes. If the Chiefs struggle offensively, it won’t suddenly be because Reid’s offensive concepts don’t cut it.

The Buffalo Bills have Super Bowl expectations, which means head coach Sean McDermott is under a lot of pressure. Then again, he’s proven to be one of the best managers in the game. After losing Brian Daboll, he’ll have his challenges ensuring the offense doesn’t fall off, but even then, that would likely only result in a coordinator change. McDermott’s safe.

Mike Tomlin practically runs the Steelers’ operation. He’s not going anywhere in a transition season after Ben Roethlisberger’s retirement. The Steelers and Tomlin know where they stand in 2022.

John Harbaugh‘s Ravens experienced extremely unlucky injury issues last season, but he’s proven to be one of the best coaches in football. Chances are Lamar Jackson helps the Ravens get back to the top of the AFC North, but even if they struggle, Harbaugh’s not going anywhere.

The time for Zac Taylor to be on the hot seat was last season, but his Bengals responded perhaps with one of the unlikeliest Super Bowl appearance in recent time. Even if they expectedly slip a bit in 2022, I don’t think the Bengals want to fire the man who helped them reach the final stage.

Kyle Shanahan‘s all in on Trey Lance in 2022. The team goes as Lance does. We don’t know what happened behind the scenes, maybe it was Shanahan pounding the table for the team to draft Lance. If that’s the case, and the QB falters, maybe Shanahan’s seat could heat up, but that’s about the only scenario. His crew surpassed expectations in 2021 and there’s expected to be growing pains with a new QB under center.

Nick Sirianni was the only new head coach from the 2021 hiring cycle to take his team to the playoffs in his first season with the whistle. Should the Eagles fall back down to earth this season, that won’t be on Sirianni. It would likely be the realization that Jalen Hurts isn’t a Super Bowl QB. With many of the pieces in place, the Eagles probably want to retain their head coach.

As a former Belichick disciple, no one knew how Mike Vrabel would be as an NFL head coach. It turns out he’s quite good with a clipboard too. Having made the playoffs in three of his first four years, Vrabel’s standing should be safe.

New NFL head coaches in 2022 are in middle ground

As odd as it would be, we have seen NFL organizations fire their head coach after just one season with the team. Or, in Urban Meyer’s case, some don’t even make it through a full season.

Wow, we have nine head coaches entering their first season with their new team. But some are entering the year with higher expectations than others.

Brian Daboll is being asked to see what Daniel Jones offers. If the fourth-year pro isn’t the long-term solution, he’ll be out the door, giving Daboll a chance to find his own personal QB project to grow with. That’s when his clock will start ticking, not in 2022.

The Minnesota Vikings are giving Kevin O’Connell a shot to take a similar roster from last year, with some improvements a chance to show he can do a better job of coaching than Mike Zimmer did. Zimmer had lots of experience where O’Connell has never been a head coach at any level. But he is a former QB, and the organization likely wants to see how his offense develops. Probably nowhere near the hot seat in Year 1.

Doug Pederson was brought in to get the most out of Trevor Lawrence, but he can’t do much worse than Urban Meyer did. Really all Pederson has to do to stay out of trouble is help the Jags slightly improve their win total, but most importantly, Lawrence has to flash the potential that helped him become the No. 1 overall pick in 2021.

If anyone thinks the Las Vegas Raiders aren’t 100% sold on Josh McDaniels being capable of bringing this team to the Super Bowl, they’d be 100% wrong. There’s a reason this team went for it, landing Davante Adams and Chandler Jones. They already had a playoff roster, now they feel they’ve strengthened it while bringing in a bright offensive mind, who learned from the greatest coach of all time in Bill Belichick.

Now we’re creating some pressure. Nathaniel Hackett and the Denver Broncos feel they have a Super Bowl QB in Russell Wilson. They want to go to the promised land right away, but everyone also knows how tough the AFC West is. This team would have to fall flat on their face to fire Hackett after one year, but maybe the Russ connection just doesn’t work with Hackett?

The Miami Dolphins feel they have a playoff roster, one that can win the AFC East for the first time since 2008. But it’s not first-year head coach Mike McDaniel who’s feeling all the heat, it’s Tua Tagovailoa.

Dennis Allen‘s coaching status is more unpredictable with Sean Payton always a threat to pop back into coaching. He’s actually still under contract with the Saints, meaning if Allen’s team fails, maybe Payton just picks up where he left off. I’d say Allen’s seat is lukewarm.

The Chicago Bears aren’t putting Justin Fields or Matt Eberflus in a winning situation in 2022. This team lacks talent. That’s why I’m inclined to believe Eberflus has a long leash. Then again, if this roster truly looks like one of the worst, the noise in Chicago may be too loud to ignore.

Lovie Smith‘s hiring felt strange from the very beginning. It’s not that he’s a bad coach, it’s just that he came out of nowhere to emerge with the gig. It still feels like the Texans made a short-term hire here. If David Culley can be fired after one year, so can Smith.

NFL coaches on the hot seat

The only way Bill Belichick is not on the Patriots in 2023 is if he either retires, or if the team looks like it has a long rebuild ahead. Maybe owner Robert Kraft becomes so bitter from seeing Tom Brady have continued success, that he just wants to start fresh in Boston?

Aaron Rodgers only has one Super Bowl ring. That’s a problem. While not all the blame can be placed on Matt LaFleur, he doesn’t escape the wrath completely. If Rodgers is still in MVP form, there’s no reason why the Packers aren’t one of the final four teams alive this winter.

For now Dan Campbell is in a good place. He took over a reclamation project of a team, and he’s never backed down. A tough-nosed coach, just as he was as a player, Campbell may just be the perfect man to turn the Lions around. I can’t place him on the hot seat quite yet, but if they don’t show improvement, it would be hard not to look around.

The oldest head coach in the NFL, at 70, Pete Carroll‘s entering an incredibly challenging season. Not only has Russell Wilson moved on, the team doesn’t have a defined starting QB. If the Seahawks do worse than their 7-10 record a season ago, why shouldn’t Carroll consider life after football?

Had the Colts not found a way to botch their Week 18 matchup vs the Jacksonville Jaguars, Indianapolis would have been in the playoffs for their third time in four years. Frank Reich has a good feel for coaching, and his 37-28 record has been impressive, considering he’s had a different QB each year. He signed on to coach Andrew Luck and ended up with Jacoby Brissett. Now he has a former MVP. The playoffs are in sight.

After joining the NFL out of Texas Tech, Kliff Kingsbury finally had a winning season as a head coach in the NFL. Should the Cardinals go backwards, which is quite possible in an increasingly tough NFC West, Kingsbury could be headed back to school.

There may not be a team who did more to add big-name players this offseason than the Los Angeles Chargers. They now hope they’ve provided Brandon Staley with enough to get his advanced defensive scheme off the ground. After having success in Chicago, Denver, and with the Rams, Staley needs to show his defenses can be special with the Chargers. If not, he may not be around much longer.

Kevin Stefanski‘s tenure with the Cleveland Browns started with a bang. It’s been anything but since. They couldn’t make it work with Baker Mayfield, a former No. 1 overall pick, and now they’re dealing with the Deshaun Watson mess. QB aside, this should be a playoff roster. It’s up to Stefanski to help them get there.

This could very well be Tom Brady‘s final season, not only with the Buccaneers, but in the NFL. If Todd Bowles can’t get more out of the Buccaneers than Bruce Arians did, if Brady moves on, they just might turn back to Arians.

Washington may have slipped into the playoffs in 2020, but it was with a 7-9 record. We’re not impressed. Everyone hyped them up last season too. But once again, 7-10 isn’t impressive. While Ron Rivera‘s done a fine job of not letting the team hit rock bottom, they also don’t appear on the verge of taking drastic steps forward. Maybe a change would be best.

Of all the teams expected to compete for a playoff spot, Mike McCarthy‘s seat is the hottest. They somehow retained their coaching staff despite having the top-ranked offense and the seventh-ranked defense. As long as they can stay relatively healthy, McCarthy’s Cowboys should be a tough out in the postseason. Otherwise Jerry Jones has Sean Payton on speed dial.

Robert Saleh came to New York preaching his defensive ways. Well, the only thing defensive about the Jets last season was their opponents. The Jets couldn’t do anything right a year ago and if Saleh’s defensive unit doesn’t start doing its job, Saleh could be a mid-season firing. Of course, Zach Wilson‘s success will play a major role too, but that’s not really Saleh’s area of expertise.

If there’s one person who likely knows it’s playoffs or bust, it’s Matt Rhule in Carolina. There were some rumors he wouldn’t even make it into this season. Rhule’s heading into his third season after winning just five games in each of his first two. It doesn’t matter that the Panthers don’t have a bonafide starting QB, this performance won’t cut it in the pros. Back to Baylor.