Where and how to watch Thursday Night Football in 2022

Its slate starts Week 2 with an AFC West divisional matchup between the Los Angeles Chargers and Kansas City Chiefs. Below, we provide you with FAQ regarding the new Thursday Night Football package and what it means for the consumer.

What is Thursday Night Football?

Since its inception as a late-season slate back in 2006, TNF has played a huge role in NFL seasons. Back in 2006, there were only five games during the week with another three on Saturday. They were originally a part of the NFL Network’s “Run to the Playoffs” package.

Thursday Night Football made its debut on November 23, 2006, with a game between the Kansas City Chiefs and Denver Broncos on Thanksgiving.

In 2014, the NFL opted to license a package to CBS Sports consisting of eight games. The games were simulcast on NFL Network.

Back in February of 2016, the NFL announced that Thursday Night Football would be split between CBS, NBC and the NFL Network for the 2016 and 2017 seasons. This package consisted of 10 games instead of the eight under previous TV contracts.

From 2018-21, Fox and Amazon Prime shared rights to TNF. Fox would air 11 games per season. Fox paid $60 million per broadcast to the NFL before Amazon Prime earned exclusive rights for the 2022 season.

When is Thursday Night Football on?

Where is Thursday Night Football on?

Amazon Prime earned exclusive rights to TNF in a contract with the NFL ahead of the 2022 season. You will need to sign up for the streaming service in order to enjoy the mid-week game as the NFL Network will not simulcast the games. Those in local markets will be able to watch TNF without signing up for Amazon Prime. Check your local listings when it comes to that.

Why is Thursday Night Football only on Amazon Prime?

Well, it’s pretty simple. Money. Money. More money. Amazon will pay the NFL and its teams $1 billion annually throughout the duration of the 11-year contract. This just goes to show us how popular both the NFL and streaming services have become. 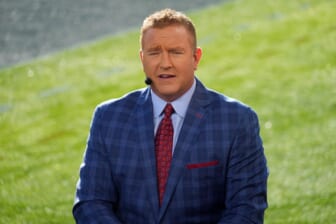 How much does Thursday Night Football cost now?

As noted above, you’ll have to sign up for Amazon. If you’re an avid online shopper, signing up for a Prime membership will give you access to the streaming service. If you are against signing up for that perk, here’s a handy guide to create your Prime account.

Amazon Prime itself costs $14.99 on a per-month basis or $139.00 over a calendar year if you pay the lump sum up front. That’s roughly a $50 savings. There’s no additional packages needed. This means once you sign up for Amazon Prime, you’ll be able to watch the games.