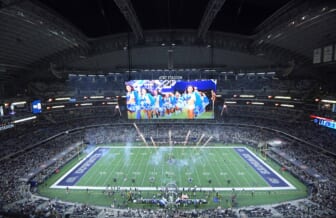 Following the departure of Amari Cooper and Cedrick Wilson, the Cowboys’ receiving corps is a lot thinner to begin the 2022 season. Michael Gallup will still be recovering from a torn ACL when Week 1 arrives and a slow start is expected even when he’s cleared to return. The real thing to watch is whether or not the offensive line improves. If it doesn’t, Dallas might not make the playoffs this year.

Check below for detailed information about the Dallas Cowboys schedule and game-by-game predictions for the 2022 season.

An 11-6 record will allow Dallas to compete for the NFC East, likely a neck-and-neck race with the Philadelphia Eagles. Given we project Dallas to split the two-game series in the regular season, it will come down to additional tiebreakers. Either way, an 11-6 record will get the Cowboys into the NFL playoffs for the second consecutive year.