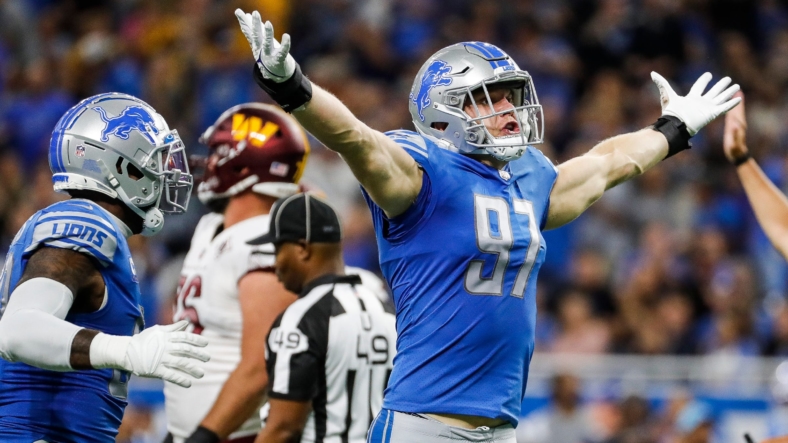 NFL Week 2 didn’t receive a ton of hype heading into the weekend. Once the battle between the Los Angeles Chargers vs Kansas City Chiefs was in the rearview mirror, many anticipated Sunday’s slate would be sedated. Instead, we got an NFL Sunday that helped shape the future of the game and will be part of legacies for several around the league.

No player proved more on Sunday than Miami Dolphins quarterback Tua Tagovailoa. He led an improbable comeback on a day when Lamar Jackson and the Baltimore Ravens looked unstoppable for three quarters. The young signal-caller’s success served as a reminder to not give up on young players too early. But that won’t be a problem for a few of the rookies who shined in NFL Week 2.

It wasn’t all positive in the NFL. The Indianapolis Colts suffered another humbling loss in Florida to the Jacksonville Jaguars, raising questions about changes in the organization. In a similar fashion, the Washington Commanders might be leaving Michigan wondering if they need to make a decision that arguably should have been made months ago.

Let’s dive into the winners and losers from NFL Week 2.

Miami Dolphins coach Mike McDaniel received all the credit for the team’s season-opening win against the New England Patriots. The dramatic comeback in NFL Week 2, belongs on Tua Tagovailoa‘s mantle and it should shape how everyone views the Dolphins’ quarterback moving forward. We saw the Alabama version of Tagovailoa.

It’s not as if he did this against the Chicago Bears or Houston Texans. Tagovailoa took on one of the best defenses in football, attacking a talented secondary and navigating an effective pass rush. Miami looked finished entering the fourth quarter, trailing 35-14 with the offense struggling. We then witnessed one of the best NFL comebacks in recent memory. Tagovailoa completed 13-of-17 passes for 199 yards and four touchdowns in the fourth quarter, becoming Mr. Clutch for the Dolphins. If Miami even gets a lesser version of this moving forward, it will be a dangerous playoff team.

A chaotic Sunday will help take the crosshairs off Chargers’ head coach Brandon Staley. As NFL Week 2 draws to a close, though, it’s important to not lose sight of what happened on Thursday Night Football. A coach who enjoyed tremendous success with aggressive play-calling on fourth downs in 2021, suddenly became gunshy on the big stage in a must-win game.

Facing one of the best NFL offenses of his generation, Staley took a bizarrely conservative approach. Los Angeles faced four separate third-and-2 scenarios in the first three quarters. Despite quarterback Justin Herbert being healthy at the time, Staley took the football out of the hands of one of the best players in the NFL. The Chargers had the ball on the Chiefs’ side of the field and treated each fourth-down decision as if a conservative approach would win the game. Unsurprisingly, Los Angeles would go on to lose 27-24 after leading 17-7 at halftime.

Winner: Aidan Hutchinson shows he can be a franchise cornerstone

The Detroit Lions coaching staff talked up Aidan Hutchinson a lot during Hard Knocks, making it clear that he was everything they wanted and more. In NFL Week 2, the rookie showed exactly why many viewed him as the best prospect in the 2022 NFL Draft. He also demonstrated why he can be a cornerstone of this defense in the years to come.

It goes beyond the box score. As Doug Farrar of Sports Illustrated highlights, Hutchinson generated his pressure in a variety of ways. He recorded a hustle sack coming from the interior to kick things off and then followed it up by bull-rushing right tackle Sam Cosmi. The third sack came from Hutchinson’s ability to burst through a small gap in the interior. Hutchinson wins in a variety of ways and this three-sack effort is just the start of things to come.

Washington Commanders defensive coordinator Jack Del Rio should consider himself fortunate for even making it to NFL Week 2. Despite the front office investing tremendous draft capital and money into the defense, Washington allowed the seventh-highest yards per play (5.7), the fourth-highest quarterback rating (100.8) and the most touchdown passes (34), the fourth-highest quarterback rating (100.8) in 2021. Despite this, head coach Ron Rivera kept Del Rio around.

Washington also kept its defensive play-caller around despite his alarming comments regarding the insurrection of the U.S. Capitol on Jan. 6, 2021. Instead of firing the defensive coordinator who couldn’t effectively coach a talented group, Del Rio was fined $100,000 and had to apologize to the locker room. Through all of this, Del Rio kept his gig.

Rivera can’t keep the 59-year-old around any longer. There is no improvement defensively from this unit, it’s making the same coverage mistakes every week without the slightest sign of corrections. Del Rio’s defense also allowed D’Andre Swift to catch a check down on third-and-15 and fall down then get up and run into the end zone. For so many reasons, Washington can do a lot better.

The Baltimore Ravens made a bad decision. While there aren’t a ton of specifics on what Jackson wanted in a contract extension, the franchise’s offer fell way short of the mark. Some questioned why Jackson would turn down a deal that made him one of the highest-paid quarterbacks in the game. Let NFL Week 2 serve as a reminder of exactly why he rejected it. 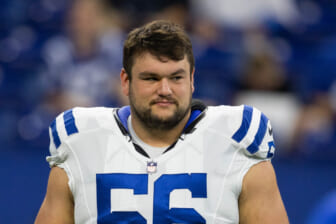 Facing one of the best defenses in the NFL, the same unit that shut him down in 2021, Jackson tore apart the Dolphins. On a Sunday without starting running back J.K. Dobbins, Pro Bowl left tackle Ronnie Stanley and with a third-string right tackle on the field, Jackson carried the Ravens’ offense once more. Over 300 passing yards, 119 rushing yards and four total touchdowns. Baltimore didn’t win, but all that falls on a defense that vanished with a 35-14 lead in the fourth quarter.

Indianapolis Colts general manager Chris Ballard is viewed as one of the best at his position. He receives overwhelming praise for maintaining a playoff contender despite the sudden retirement of quarterback Andrew Luck. In addition, Indianapolis is praised for always sustaining cap flexibility and drafting talents like Quenton Nelson and Michael Pittman Jr.

The truth is, this roster and Ballard’s construction of the team isn’t nearly as good as the public perception. Indianapolis is alarmingly weak at left tackle, right guard, tight end and wide receiver. It’s not even a surprise at this point because these were all areas of concern early in the offseason. How did Ballard address these problems? He overpaid for Mo Alie-Cox, settled for an ugly platoon at left tackle with Matt Pryor and Bernhard Raimann and believed that Alec Pierce and Parris Campbell were more than enough. This is also the same general manager who traded a first-round pick for Carson Wentz. Frank Reich isn’t the Colts’ biggest problem.

Winner: Garrett Wilson emerges as a star in New York

We’ll remember NFL Week 2 as the Sunday when some of the top rookies showed out. So much attention was given to Hutchinson for his three-sack performance, but the New York jets don’t pull off that stunning comeback over the Cleveland Browns without Garrett Wilson. New York finally has the playmaker it so desperately needed.

Wilson is already Joe Flacco’s go-to target. He drew 14 targets on Sunday and that bodes well for the opportunities when Zack Wilson returns. Facing a strong Browns’ secondary, Wilson hauled in eight receptions for 102 yards and a pair of touchdowns. Of course, fans will remember seeing the rookie step up in the clutch. On the game-winning driver, Wilson picked up a first down with 55 seconds to go on a 12-yard gain then followed it up with the game-winning touchdown.

The Pittsburgh Steelers can’t keep doing this. Heading into the season, the organization laid out a plan for Kenny Pickett. The rookie would follow the path taken by Patrick Mahomes, sitting out almost the entire season. It reflected just how high the coaching staff and front office were on Mitchell Trubisky. The plan needs to be abandoned.

NFL Week 2 is the latest evidence that Trubisky just isn’t a starting-caliber quarterback. After completing just 55.3% of his pass attempts with a 78.2 quarterback rating and 5.1 YPA in the season opener, history repeated itself on Sunday. Trubisky once again averaged 5.1 ypa, needing 21 completions on 33 attempts to reach 168 passing yards. The Steelers’ offense with Trubisky under center is reminiscent of the passing attack when Ben Roethlisberger’s arm was cooked. It doesn’t matter if there is a tough schedule ahead, Trubisky shouldn’t start anymore.

The San Francisco 49ers’ season could have already been over in NFL Week 2. Many thought the 49ers wouldn’t get things worked out with Jimmy Garoppolo, ultimately cutting him before the season or finding a trade partner. If that happened, we’re looking at Kyle Shanahan starting a third-string quarterback and this team being finished.

Thankfully for the 49ers, the insurance plan paid off. Losing Trey Lance for the remainder of the season is a crushing blow, more so for a young player who has played one full season since he graduated high school. From San Francisco’s perspective, it now has stability at quarterback. Garoppolo might put a ceiling on the offense, but Shanahan can get the most out of him and that can still mean challenging for the NFC.

It’s time to be concerned about the Denver Broncos. The Week 1 loss to the Seattle Seahawks could be chalked up to fumbles at the goal line and costly penalties. But even when those issues are cleaned up, there are bigger concerns in Denver. Russell Wilson looked awful in his debut at home, even hearing boos from the “friendly” crowd on a day when he couldn’t even complete 50% of his passes and took four combined sacks+interceptions.

We might be willing to take a less skeptical view of Wilson if we had more faith in the coaching staff. But after a week of being surrounded by criticisms for his in-game decision on Monday Night Football, the Broncos’ coach added fuel to the fire. Not only does Hackett seem to have no faith in Wilson in late-game situations, he also keeps butchering clock management.

Late in the third quarter trailing 9-6, Denver took far too long to get its field-goal unit out for a 54-yard attempt because of Hackett’s indecisiveness. While Brandon McManus drilled the game-tying kick, a delay of game penalty wiped out the three points and Denver punted.

Denver comes out of NFL Week 2 with a .500 record and little confidence from the fan base or analysts that this team is ready to compete in a brutal conference. It’s all made worse by the fact that this was the easiest stretch in the schedule.

The Arizona Cardinals don’t deserve Kyler Murray. Somehow, Kliff Kingsbury and Steve Keim received contract extensions this offseason long before ownership finally paid the face of its franchise. We saw once again in NFL Week 2 that the only person making Arizona relevant right now is the quarterback. 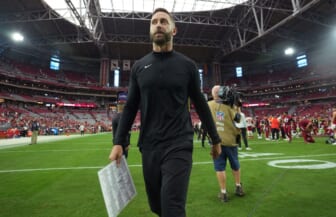 Look at the incredible comeback against the Las Vegas Raiders. The best moments, the plays that changed the game, came when Murray had to improvise and use his natural gifts. For all the mockery Murray received over the film study clause in his extension, he had a point about his talent allowing him to take over. Arizona should be winless thanks to a pair of ugly losses or feeling great about a new regime right now. Instead, neither is the case because Murray saved his coach and general manager then saved his teammates on Sunday.