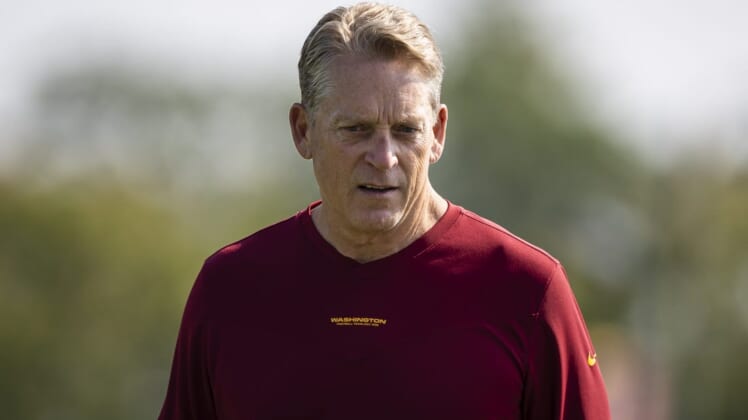 Washington Commanders defensive coordinator Jack Del Rio defended a tweet he wrote earlier in the week that questioned why protests following the murder of George Floyd in 2020 were not being discussed in the same manner as the insurrection at the U.S. Capitol on Jan. 6, 2021.

“Would love to understand ‘the whole story’ about why the summer of riots, looting, burning and the destruction of personal property is never discussed but this is ??? #CommonSense.,” Del Rio wrote Monday on Twitter.

Would love to understand “the whole story ” about why the summer of riots, looting, burning and the destruction of personal property is never discussed but this is ???#CommonSense

Del Rio, 59, stood by his statements on Wednesday.

“I’m just expressing myself, and I think we all as Americans have a right to express ourselves, especially if you’re being respectful,” Del Rio told reporters. “I just asked a simple question, really – let’s get right down to it.

“Why are we not looking into those things? Because it’s kind of hard for me to say, I can realistically look at it, I can look at images on the TV, people’s livelihoods are being destroyed, businesses are being burned down, no problem. And then we have a dust-up at the Capitol, nothing burned down, and we’re going to make that a major deal.

When asked if Del Rio thinks his tweets have any affect on the Black players on the team, and that he compared the situation surrounding Floyd to the attack on the Capitol, he said the following:

“Uh no. No, I don’t think race had anything to do with that incident. So, no.”

Del Rio, who is entering his third season with the team, also said he wasn’t concerned if some of the players take issue with his personal beliefs, or if his stance is counter to those of the some players.

“Anything that I ever say or write, I’d be comfortable saying or writing in front of everybody that I work with, players and coaches,” he said. “I express myself as an American. We have that ability. I love this country. I believe what I believe and I’ve said what I want to say. Every now and then, there are some people that get offended by it.”

“I’m not gonna talk about the stuff that I talk with my coaches about, especially stuff that’s off the field and not pertaining to football,” Rivera said Wednesday. “It’s just everyone’s entitled to their opinion now.”