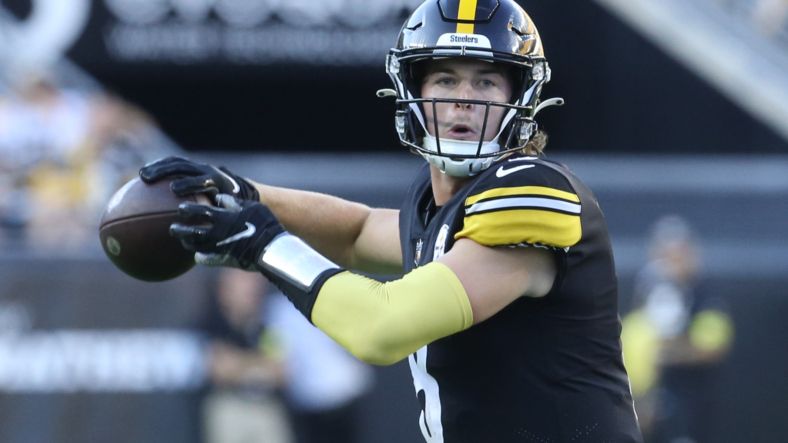 The Pittsburgh Steelers felt very confident with their draft evaluation of quarterback Kenny Pickett, selecting him with the 20th pick in the 2022 NFL Draft despite many not viewing him as a first-round talent. Even for the franchise that was highest on the young signal-caller, he has surpassed expectations.

Pickett went into the summer third on the Steelers’ quarterback depth chart behind Mitch Trubisky and Mason Rudolph. While many expected him to move ahead of Rudolph in short order, it was viewed as a foregone conclusion that Trubisky would be the starting quarterback in Week 1.

Expectations quickly changed. Rudolph quickly fell behind in the quarterback competition and Trubisky struggled with his first-team reps. While the former No. 2 overall pick remained the projected starter, Pickett received more opportunities in training camp and played a majority of the preseason.

Pittsburgh came away very impressed by everything the rookie quarterback showed. It was one thing to dominate second- and third-string players in exhibition games, but he also showed exceptional poise and NFL-ready tools in spite of his limited experience.

According to Ian Rapoport of NFL Network, Pickett is performing even better than the Steelers expected. He continues to make a strong impression on the coaching staff and is showing improvements in the little things necessary for a quarterback to become successful.

However, he is the No. 2 quarterback on the depth chart heading into the Week 1 opener against the Cincinnati Bengals. It also seems to be a plan the front office and coaching staff hope can remain in place for a long time.

Pittsburgh isn’t going to rush its young quarterback onto the field. It’s a disciplined organization that can at times stray from the norms in the NFL. At a time when many franchises might feel obligated to start the quarterback they spent a first-round pick on, the Steelers want to be patient.

According to Rapoport, the Steelers are hoping this becomes just like the situation Patrick Mahomes experienced with the Kansas City Chiefs. After being selected with the 10th pick in the 2017 NFL Draft, Andy Reid kept his highly-touted rookie passer on the bench until a Week 16 game that was otherwise meaningless for the franchise.

It remains to be seen just how long Pittsburgh can stick to that timeline before plans change. Injuries happen every week and there is ample evidence that Trubisky isn’t a quality starting quarterback. If he struggles and the Steelers rack up early losses, pressure will mount to make a quarterback change.

Based on recent history, it would be a surprise if Pickett doesn’t start multiple games in his rookie season. Pittsburgh doesn’t project as a top playoff contender in 2022, meaning it could play for the future towards the end of the regular season.

For now, though, the Steelers are committed to their plan of bringing along their new face of the franchise slowly. While it strays from the norms witnessed in recent years, it’s clear Pittsburgh hasn’t lost any confidence in Pickett.