Pittsburgh Steelers quarterback Mitch Trubisky arrived for training camp preparing to be the starter in Week 1, with a competition against rookie Kenny Pickett viewed purely as a performance. After a few practices, things are starting to look bleak.

The Steelers have made their plans at quarterback clear from the start. Trubisky was reportedly informed that Pittsburgh planned to draft Pickett. However, the coaching staff and front office made it clear that they wanted the veteran quarterback to be their starter to open the season

According to Mark Kaboly of The Athletic, it’s been a very rough start to training camp for Trubisky. He started on a positive note, converting nearly every attempt on a Seven Shots drill. Since then, however, he’s missed on 12 consecutive attempts at the drill.

Pittsburgh wants Trubisky to win this job. He’s received all the first-team reps this summer, with Pickett and Mason Rudolph following behind. Despite the team pushing for him to be its starting quarterback, the former No. 2 pick isn’t taking advantage of the opportunity.

Kaboly highlighted one team period during a recent Steelers’ practice with Trubisky going 0-for-4 with an interception that was easily avoidable.

Preseason games haven’t even arrived, so there’s very little reason for the Steelers to worry right now. However, Trubisky’s early struggles point toward his volatility as a starting quarterback and hint that he might not be as viable of an option as Pittsburgh hoped.

The problem for the organization is a quarterback change early in the year could hurt Pickett. He’d be starting behind one of the worst offensive lines in the NFL in a scheme that he isn’t especially familiar with just a few months into his career. 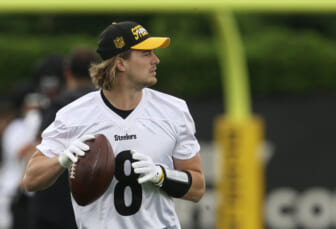 All of this doesn’t bode well for the Steelers’ hopes this season. A defense that is a shell of its former self and an offense with multiple issues could doom Pittsburgh’s playoff hopes early this fall.