The Pittsburgh Steelers selected Kenny Pickett with the 20th pick in the 2022 NFL Draft, making him the lone quarterback drafted in Round 1. While many expect Pickett to see the field as a rookie, it could happen far later than anticipated.

While most rookies drafted in the first round typically see the field quickly, there’s a realistic possibility the Steelers take a different approach. For as high as they are on the young signal-caller who starred at Pittsburgh, the Steelers also want to compete for the 2022 NFL playoffs.

It’s why they signed Mitch Trubisky. Despite the 27-year-old quarterback signing an incentive-laden deal, the Steelers anticipated him becoming their starting quarterback this year. He provides both the experience and mobility coach Mike Tomlin wants in his starter, making him the favorite in the quarterback competition.

While Pittsburgh is calling it a quarterback competition before training camp, prior reporting indicates the positional battle is more for show. Trubisky expects to be the starter in Week 1, but he might hang onto the job much longer than that. 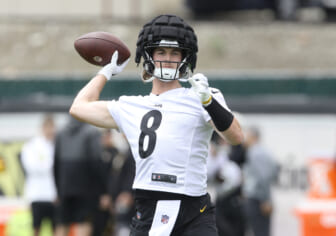 Also Read:
Kenny Pickett’s consistency could be the golden ticket to being a long-term starter

As part of ESPN’s breakdown of rookie quarterbacks, Steelers’ reporter Brooke Pryor weighed in on the situation in Pittsburgh. te Steelers’ inside estimated there is a 40% chance Pickett sits the entire 2022 season. Even if he makes a start, Pryor thinks it’s possible that doesn’t come until Week 18.

Why the Pittsburgh Steelers can be patient with Kenny Pickett

The presence of Trubisky certainly plays an important role in the Steelers feeling like they can exercise patience with Pickett. Pittsburgh wants to compete for a Super Bowl this season and the belief within the organization is that Trubisky offers a far better chance to win immediately.

There’s another element at play here. While experienced quarterbacks often open the season as a team’s starting quarterback, a rookie can take over after the bye week. It’s the ideal plan, with a coaching staff having two weeks to prepare the inexperienced signal-caller for his first NFL start.

It’s why the Steelers’ schedule makes an early 2022 start more unlikely for Pickett. Pittsburgh doesn’t have its bye week until November, meaning it will have already played eight games before the two-week window to prepare Pickett for his first start.

If Pickett is playing adequately and the Steelers have a winning record, there would be no reason to make a change. It would be even more unlikely considering the schedule out of the bye features the New Orleans Saints, Cincinnati Bengals, Indianapolis Colts and Baltimore Ravens before Dec. 18.

At that point, Tomlin’s team could be fighting for its life in a tight playoff race and any sudden change at the most important position in sports might hurt the team. By Week 18, the Steelers will likely know their fate and that would make the final regular-season game a perfect time for Pickett to make his first NFL start without extra pressure on his shoulders.