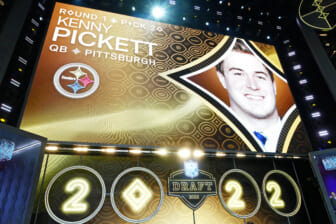 Future Hall of Fame selection Ben Roethlisberger is gone and while he might not be happy about it, the right decision was made. Early expectations are Mitch Trubisky will be the Pittsburgh Steelers starting quarterback in Week 1, entering the summer with experience and momentum. However, we’d expect Pickett to make several starts in 2022.

At running back, it will be the Najee Harris show once again. He served as the workhorse (307 carries) in his rookie season and played extremely well. Pittsburgh hopes an improved offensive line and a more athletic quarterback make things even easier for the second-year rusher.

There is also plenty of excitement about the receiving corps. Diontae Johnson and Chase Claypool already complemented one another nicely. Now, rookie George Pickens enters the mix. He profiles nicely as a No. 3 receiver immediately and could step up as the No. 2 wideout next season.

Defensively, we’re not expecting greatness. Pittsburgh’s front seven should be healthy in 2022 and that offers room for improvement. However, concerns in the secondary give us serious pause when evaluating this unit compared to the top-10 defenses in the NFL.