Mitch Trubisky and Kenny Pickett are taking part in the Pittsburgh Steelers quarterback battle this offseason, one of the few position battles at signal-caller this summer. However, the battle might not be exactly what it is being portrayed to fans.

When the Steelers drafted Pickett with the 20th pick in the 2022 NFL Draft, many assumed it wouldn’t take long for the Pittsburgh alum to take over as the starting quarterback. He came in with plenty of hype, mentorship from Ben Roethlisberger and offers the Steelers more upside than Trubisky.

While Pittsburgh is expected to compete for a playoff spot this season, the consensus evaluation is this team isn’t close to Super Bowl contention. It’s fueled speculation that Pickett could take the starting job before the regular season. However, it seems that might be far from reality.

Mark Kaboly of The Athletic wrote that the Steelers’ quarterback competition “will be more for show than substance.” Trubisky pulled ahead in early practices before training camp and is now emerging as the clear favorite to take the field in Week 1 against the Cincinnati Bengals. 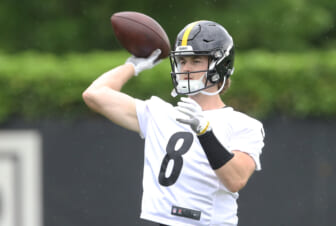 If Trubisky is the clear front runner, it’s not about money. The contract he signed this offseason with Pittsburgh is worth $14.285 million over two years, but incentives play a heavy part.

When will the Pittsburgh Steelers start Kenny Pickett?

Pittsburgh will provide Kenny Pickett with all the snaps he needs to prove himself during the preseason. While he and Trubisky might alternate starts, the rookie quarterback will receive a majority of the playing time so the team can conduct a thorough evaluation.

If Trubisky starts Week 1, it might not be simply due to him winning the job outright. Pittsburgh opens the season with matchups against Cincinnati Bengals, New England Patriots and Cleveland Browns in the first month of the 2022 NFL schedule.

It would be a brutal stretch for a rookie quarterback. Because of that, there’s at least a chance the Steelers wait until a Week 4 matchup against the New York Jets before turning things over to Pickett. However, the schedule gets tougher after that with matchups against the Buffalo Bills, Tampa Bay Buccaneers, Miami Dolphins and Philadelphia Eagles in October.

That’s why another potential target date stands out. If Trubisky handles himself through the first two months of the season, providing steady but unspectacular play, he could remain the starter for the first two months. After that, the Steelers can make the upside play by announcing Pickett will start coming out of the bye week.

It would provide him with two weeks to prepare, setting the stage for his first NFL start at home against the New Orleans Saints in Week 10. Whether the Steelers are in playoff contention or not, it would be the perfect opportunity for the young signal-caller to gain experience against quality competition.

Of course, things can change quickly. If Pickett reports to training camp and shows instant improvement, he can make this a legitimate quarterback competition once again. After that, all it will take is a strong preseason and the support from both the fan base and locker room could make the decision easy for Mike Tomlin and the coaching staff.

One thing is for certain, Pickett will make several starts at Heinz Field this season and everyone will get to see whether or not Pittsburgh made the right decision by drafting him.