Kenny Pickett was largely considered the best quarterback available in the 2022 NFL Draft at the conclusion of the season, though several put now-Tennessee Titans quarterback Malik Willis ahead of him after offseason showcases were completed.

Willis’ incredibly high ceiling and apparent improvement as a passer. But one thing that Pickett possesses that is invaluable is that he boasted the highest floor in this class and could potentially have a much higher ceiling than he’s been given credit for.

Why Kenny Pickett’s floor is underrated

The NFL is a quarterback-hungry league and generational talents with sky-high ceilings are hard to come by. Players like former Liberty signal-caller Malik Willis have a chance to become one of the best players in the NFL within just a few years because of the rare athleticism and physical tools they bring to a team.

But with that so often comes a trade-off — the team that picks up a player of this type is betting that all of those traits and abilities will fully translate to the next level without any severe shortcomings that ultimately cancel them out.

With a player like Pickett, the foundation is set even if the same type of “electricity” doesn’t exist within his game and a team gains a player who should at least be a back-up who can consistently win games when called upon. Said player can stick around for a long time with the chance of him developing into a “game manager” type of multi-year starter. In this scenario, the supporting cast matters a lot to the team’s overall success.

The offseason and QB1

The tape from a season and from the entirety of a quarterback’s college career tells the majority of the story as to who they are as a player and what they bring from a tangibles perspective. But after all of this is over, when all of the games are played and all the evaluations are made, come offseason showcases like the Reese’s Senior Bowl, the East-West Shrine Game and the NFL Scouting Combine.

While these allow some players to stand out after they were put at a disadvantage by players, coaches or other factors around them, they should not change where a quarterback is ranked in most cases.

Throughout the Senior Bowl and the combine, there was an expectation that Pickett, who was heralded largely as the best quarterback available for the taking when they started, would separate himself far and away from the likes of Willis and Matt Corral. That didn’t happen, and it wasn’t necessarily a negative thing either.

Pickett’s quarterback trainer, who has worked with him since his earliest days, calls the quarterback “Johnny Consistent” and Pickett very much embodied the definition of that through February and March. He didn’t do anything to hurt himself or anything that popped enough to make people want to firmly cement him over Willis. This, despite the fact that Willis showed a decent amount of red flags on tape but was throwing with more touch and accuracy during these showcases.

On top of this, Pickett’s meteoric rise of his own in which he showed Joe Burrow-like flashes should not be ignored and implies his ceiling could be much higher than some are giving him credit for. After four years at Pitt in which he didn’t jump off the stat sheet, Pickett outdid himself in 2021.

The long-term outlook for Kenny Pickett

Pickett projects as a quarterback who could become a long-term starter and will at least be a reliable backup for a team. The situation for him in Pittsburgh is a favorable one with the way the quarterback room currently stands with Mitchell Trubisky and Mason Rudolph alongside Pickett.

Sure, it looks like there’s a strong chance Pickett won’t be the Day 1 starter when the season-opener rolls around this fall. But the moral of the story is that neither Trubisky nor Rudolph has staked their place as Pittsburgh’s starter of the future and both of them still have a lot to prove.

The general thought is that Trubisky, who has been getting the first-team reps, will be the starter for 2022 after things didn’t go the way anyone had hoped for when he was with the Chicago Bears. In his final season in the Windy City, Trubisky saw action in 10 games —completing 67% of his passes for 2,055 yards with 16 touchdowns and eight interceptions.

Rudolph also stands a chance to at least see the field if he doesn’t make a push to overtake the job from Trubisky after he played in two games a season ago.

There is also 2022 draft pick Chris Oladokun out of South Dakota State, who the Steelers took in the seventh round. Oladokun has shown upside as a passer, but has been praised more for who he is as an athlete and a runner.

He definitely comes across as a player who could show upside on the practice squad and be moved up onto the active roster when there are injuries or a situation like that that calls for a move-up. But he presents no real threat for Kenny Pickett or the starting job in the current equation by any means. 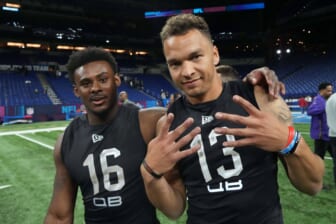 In reality, it may be best for Kenny Pickett to sit for one season or at least part of one season even if he is the best quarterback the Steelers have. This is a league that’s seen so many talented rookies get thrown into the fire when they could have had a more solid start if they had the opportunity to hold the clipboard and have their focus on absorbing information.

Regardless, the Steelers easily have one of the most questionable quarterback situations in the NFL. How everything plays out in both the 2022 season and the ones that immediately follow it will be something to watch.