Ranking the 9 QB picks in the 2022 NFL Draft, from Malik Willis to Chris Oladokun

The 2022 NFL Draft was rather interesting when it comes to the quarterback position. Former Pitt star Kenny Pickett went to the Pittsburgh Steelers with the 20th pick.

Another quarterback was not taken until Desmond Ridder went to the Atlanta Falcons in the third round. In shocking fashion, the consensus No. 1 QB in the draft in that of Liberty’s Malik Willis was selected a dozen picks after Ridder.

All said, only nine quarterbacks were taken in the annual NFL Draft. Below, we rank them from nine to one while taking into account value.

Related: Winners and losers from the 2022 NFL Draft

It’s not necessarily a bad decision for a team like the Steelers to take two quarterbacks in one draft. Under recently-retired general manager Kevin Colbert, this team kicked the quarterback situation down the road big time until Ben Roethlisberger finally called it quits following the 2021 season.

With Mitchell Trubisky and rookie first-round pick Kenny Pickett leading the depth chart, it also made some sense to go with a project signal caller in Round 7. At issue here is passing up on former Nevada star Carson Strong for a player in Chris Oladokun who many outlets didn’t even have as a priority free agent. How much of a reach was this? NFL.com had Oladokun with the lowest possible grade among NFL Draft prospects.

With Kansas State over a five-year span from 2017-21, Thompson threw all of 42 touchdowns in 885 pass attempts. He threw 28 touchdowns in his final 26 starts for the Wildcats. That type of performnace at the college level typically isn’t indicative of a success at the NFL level.

There’s some stuff to like about Thompson’s game. He’s mobile in the pockett, boasts plus-level arm strength and can find himself getting hot. Unfortunately, issues with ball placement and a lack of consistent success in college made this a questionable pick in Round 7 for a Dolphins team that already boasts Tua Tagovailoa and Teddy Bridgewater on its roster.

It made perfect sense for San Francisco to go quarterback with Mr. Irrelevent (final pick of the draft). Nate Sudfeld is a journeyman behind Trey Lance. Veteran Jimmy Garoppolo has no long-term future in Northern California. Why not see what someone with a wealth of college success can offer?

Purdy was tremendous for Iowa State during his four-year run, tallying 100 total touchdowns against 33 interceptions. Unfortunately, he lacks the talent level to be considered anything more than a career backup. Why didn’t San Francisco go with a higher-upside prospect in the aforementioned Strong? Heck, Notre Dame’s Jack Coan might have been a better option on the undrafted rookie free agent market.

Reach. That’s the best way to describe what Pittsburgh did by selecting Pickett with the 20th pick. The team could have traded down and still likely have landed him in the bottom of Round 1. We’re talking about a signal caller who wasn’t even ranked No. 1 by most outlets or betting sites in a draft that was seen as weak at that position.

Pickett boasts a high floor, but also has a low ceiling. He performed at a high level just one season in college and has some concern over the size of his hands. We love that Pittsburgh found a way to address the quarterback position. We’re just not sure that it took the right quarterback at the right time in the 2022 NFL Draft.

Ridder entered his senior season with Cincinnati seen as a late-round prospect. He showed out big time (3,324 passing yards, 355 rushing yards, 36 total TD, 8 INT). However, there became some concern as the pre-draft process played out that he might not translate too well to the NFL level.

While Ridder has high football IQ, he struggles with accuracy and actually providing touch on passes. Couple that with average arm strength and a slow release, and there’s some concern over whether he’ll end up being a starter-caliber quarterback. With that said, Atlanta found someone with upside in Round 3 after trading franchise stalwart Matt Ryan earlier in the offseason. That’s not a bad thing.

Leading up to the 2021 season, Corral had first-round written all over him. He was coming off a tremendous junior campaign for Ole Miss, tallying 33 total touchdowns. However, there were some concerns over his reckless play on the field and high turnover mark (14 interceptions in 10 games).

Corral seemingly turned things around as a senior under Lane Kiffin. He was brilliant for Mississippi en route to tallying recording 31 total scores against five picks. Unfortunately, it did not translate to success in the pre-draft process.

Carolina can’t say it’s not happy about this development. After passing up on a quarterback with the sixth pick, the Panthers traded up in the third round for Matt Corral. Sure he’s not a Day 1 starter. But this represented value at a need position. If all goes according to plan, he could take over for the struggling Sam Darnold as the Panthers’ starter in 2022. 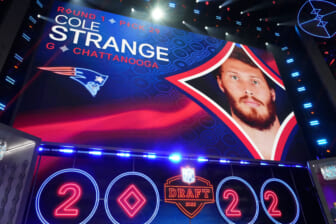 To say that it was surprising for the Patriots to select a mid-round quarterback after drafting Mac Jones in the first round last year would be an understatement. But we’ve learned to expect the unexpected.

For New England, this was as much about finding a potential long-term backup to Jones than anything else. Then again, head coach Bill Belichick could be playing chess here. That is to say, acquiring a record-breaking college quarterback in hopes of flipping him for more value down the road.

Bailey Zappe might lack the arm strength to be a functioning starting quarterback in the NFL. But it’s hard to ignore the success that he had at Western Kentucky. We’re talking about a dude who threw 62 touchdowns a season ago — breaking Joe Burrow’s Football Bowl Subdivision record. Maybe Belichick and Co. are on to something here. If not, it was a mere fourth-round selection.

Yet another quarterback who was getting first-round play early in the pre-draft process, Sam Howell was a three-year starter at North Carolina. He boasts a dual-threat ability and is a darn good decision-maker from the pocket. His ability to throw from multiple angles on the run is something that attracted Howell to scouts dating back to his freshman season.

We’re talking about someone who is a bit smallish (6-foot-1) and struggles with both arm strength and accuracy down the field. But that’s what you get in the fifth round. If nothing else, Washington now has a young quarterback in the mix behind the recently-acquired Carson Wentz.

Malik Willis’ fall down the draft board was one of the biggest storylines during the 2022 NFL Draft. During the pre-draft process, there was some thought that he might go as high as No. 2 overall to the Detroit Lions. Instead, he fell to about the middle of the third round.

There’s obvious concerns over the level of competition Willis played against at Liberty. He’s also a bit raw in the grand scheme of of hings. But you can’t teach his dual-threat ability, arm strength and ability to progress through his reads. He’s a first-round talent the Titans nabbed in the third round as the future heir-apparent to Ryan Tannehill. This might have been one of the best picks of the entire 2022 NFL Draft.