Not to be outdone, the six-time Super Bowl champion head coach and de facto general manager also surprised the masses by picking a quarterback in Round 4 despite the presence of 2021 first-round pick Mac Jones.

Below, we look at the 2022 New England Patriots draft class while providing you with an overall grade.

A center by trade, the Patriots drafted Cole Strange to play left guard out of the gate. The small-school product is 23 years old with a vast amount of experieence. With that said, he was seemingly a huge reach at this slot. Just look at how the Los Angeles Rams’ brass reacted to New England selecting Strange at 29.

CBS Sports had Strange as the 57th-best prospect in the draft. Over here at Sportsnaut, we didn’t have him as one of our top-50 prospects. None of this is to say that Strange can’t be a home run of a pick.

“Yeah, I mean, we feel like that was a good — a guy that fits well — Cole fits well into our team and our system, and obviously think he’s a good player. It’s a composite of work with any player, so whatever opportunities you have to evaluate him, you evaluate him. … We took the best option that we had, whether it was at 21 or 29 — whatever it ended up being, 29. At those two points, we felt like we made the best choice that we could. … He wouldn’t have lasted much longer.”

It’s hard to question Belichick given his track record of success. We’re not going to down trade the Patriots’ draft too much with this pick. He knows more than all of us about how the big board was playing out and just how well Strange fits into the Pats’ system. 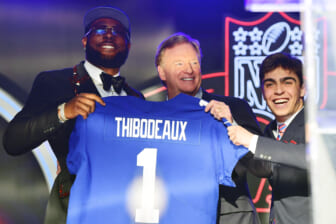 New England traded up four spots in the second round Friday evening to select this electric and speedy wide receiver. The 6-foot-2 Thornton ran a blazing 4.28 40-yard dash during the 2022 NFL Scouting Combine and can take the top off a defense in the matter of seconds.

Last season with Baylor, Thornton recorded 62 receptions for 948 yards and 10 touchdowns while averaging 15.3 yards per catch. He brings another element to the Patriots’ offense with Mac Jones under center.

The only issue here might be value. NFL.com has him as an average backup or special teams performer with a mid-round grade.

After perceived reaches in the first two rounds, New England turned the corner by adding two cornerbacks in Round 3 and 4. With the 85th pick, this team took slot guy Macus Jones from Houston. The 5-foot-8 Jones is strictly a slot guy who boasts tremendous awareness and athleticism in coverage. Last season with Houston, he recorded 13 passes defended and five interceptions. According to Pro Football Focus, Jones was the fifth-best cornerback in the entire nation in 2021.

New Engand then doubled down at cornerback with the first of its three fourth-round picks in selecting boundary guy Jack Jones from Arizona State. Jones has the skillset to be a starter at the next level. A former top recruit at USC, Jones was ruled academically ineligible for the Trojans and found himself arrested after breaking into a restaurant. Hence, why he slipped to Round 4. With that said, this is an area of the draft that you can take chances.

In getting the “Jones brothers,” New England filled two pretty glaring holes. Top cornerback J.C. Jackson departed for the Los Angeles Chargers in free agency. There’s also some concern in the slot with Jonathan Jones having missed 11 games to injury last season. Prior to that, the veteran yielded a 104.0 QB rating when targeted in 2019 and a 90.0 mark in 2020.

Another surprising pick, these Pats took former Western Kentucky standout Bailey Zappe with the final of their three fourth-round picks. It’s not that New England added a quarterback. Rather, it’s that the team didn’t wait until the later rounds or free agency to do just that.

Perhaps, Belichick’s decision to take the small-school product was about value. We’re talking about an uber-productive college player who might surprise a ton of folks in the NFL. Last season with Western Kentucky, Zappe put up some absurd numbers. That included him throwing for 5,967 yards with 62 touchdowns and 11 interceptions. That’s a real thing.

The Patriots figure to have a franchise quarterback in Jones. Acquiring Zappe in the mid rounds could prove to be fruitful. That is to say, potentially moving him down the road for a higher draft pick should he show out during the preseason or if Jones gets injured at some point.

As noted above, the Patriots draft included some eye-opening selections. We’ll have to wait to see how this pans out for Belichick and Co.

With all of that said, there was some nice value in the mid rounds with Marcus Jones and Jack Jones. Adding two different running backs in that of Pierre Strong and Kevin Harris will also help the Pats moving forward.