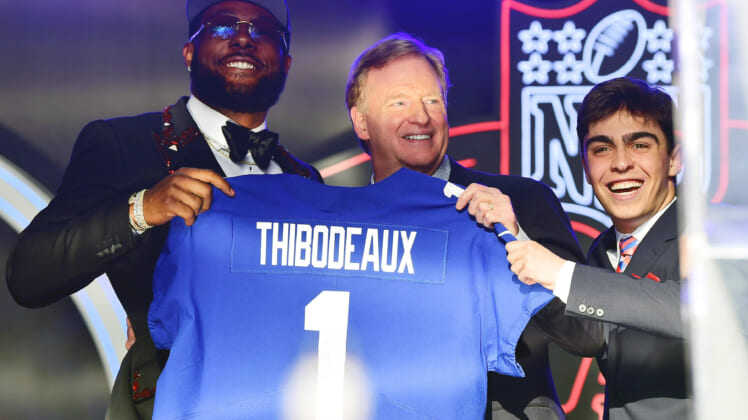 After months of speculation between when the college football season ended and when the 2022 NFL Draft began, we finally started getting the answers to some of the burning questions around the league.

How many quarterbacks will go in the first round? Will a running back be taken in the first? Which stars will be traded during the draft? We now know the answer to all these questions and more. Here are 10 things we learned during the 2022 NFL Draft.

New York teams had the time of their lives in Vegas

Going into the draft, we knew the New York Jets and New York Giants would likely be draft winners, right? Both teams in the Big Apple had two top-ten selections, likely giving them a pair of blue-chip prospects. But it was the way they handled the draft in its entirety that has to have fans in the biggest media market in America ecstatic for the 2022 season to begin.

The Jets began by adding Sauce Gardner to the dish, then added a smooth route-runner with Garrett Wilson, yet weren’t done in the first, adding edge rusher Jermaine Johnson II. Then, they also grabbed Breece Hall in the second round, totaling four players who many had first-round grades on. Their offense and defense took a huge leap, giving both Zach Wilson and Robert Saleh renewed energy to begin the year.

And the G-Men? Don’t even get me started. They got their top-rated offensive tackle with Evan Neal and landed Kayvon Thibodeaux, two players who could just as easily been No. 1 overall picks. Getting both of them without having to trade up means new general manager Joe Schoen had a strong feel for the board in his first draft. A++

First off, credit to Malik Willis. After hearing he could go as high as No. 2 overall, the top dual-threat QB in the class fell all the way to the third round with the Tennessee Titans trading up to select the Liberty product at pick No. 86.

Basically, we learned that teams just didn’t value Willis as high as many in the media portrayed. That’s the craziness of draft week, with so many unknowns.

With just one quarterback taken in the first round, and not until Kenny Pickett fell to No. 20, needless to say, it was a surprise with so many teams entering the event with a strong QB need.

We saw a run in the third round, beginning with Desmond Ridder at No. 74 to Atlanta and Matt Corral going to Carolina at No. 94 but these were all players who were being talked about as late-first round picks. Seeing them slide into the last round of Day 2 was a bit of a surprise for the most valuable position in football.

Well, this is unexpected. It makes sense to prioritize protection, drafting left tackle Ikem Ekwonu at No. 6, but it left the Panthers without a chance to add a viable competitor for Sam Darnold to start the year. While they said he’s a “very good quarterback“, no one else is convinced. Yes, they added Matt Corral, but for him to beat out Darnold as a rookie would be a shock, but not impossible. Of course, there’s still a chance they could make a trade for Baker Mayfield or Jimmy Garoppolo, but after selecting Corral, that seems more unlikely.

Say goodbye to the first-round running back

Gone are the days when Saquon Barkley would go No. 2 overall. Last year we saw Najee Harris land at No. 24, and even that was a surprise. In my opinion, it still makes sense to take a top-rated RB if your rushing offense isn’t among the best in the league. The Bills were one team I had my eye on for that reason, but they got their guy with James Cook at pick No. 63.

Still, players like Breece Hall could have been a first-rounder, instead no running backs were taken in the opening round. Sure, running backs can be a dime a dozen, but the truly special ones can transform an offense. Look at Derrick Henry and Jonathan Taylor, sure they happened to be second-round picks but anyone would tell you, they’re worth a first.

Not only did six wide receivers get taken in the first round, two more were traded for first-round picks, with Marquise Brown and AJ Brown changing teams. The former requested a trade out of Baltimore and the latter couldn’t see eye-to-eye on his contract value with the Titans. Now both will take their talents to a new atmosphere, playing with young QBs who are thrilled to have a top-echelon talent.

Basically, teams view wide receiver as one of the most valuable positions on the field, and that was on full display during the draft.

One team that doesn’t appear to place a high value on building up a strong receiver core is the Green Bay Packers, but that’s probably because they have Aaron Rodgers who could still deliver the football to the perfect spot in a tornado. Maybe the Packers feel Rodgers does all the magic, so having a top-tier WR isn’t worth the investment, who knows. But seeing them wait until pick No. 34 to address the position was a bit of a surprise. Still, they ended up with two potential playmakers in Christian Watson and Romeo Doubs. It’s not a bad haul.

One can’t help but feel bad for Justin Fields and fans of the Chicago Bears. In the first year under new guidance with general manager Ryan Poles and head coach Matt Eberflus, their expectations are at an all-time low. This is largely because of the roster they’ve torn down and failed to put back together. Seriously, this roster has the looks of earning the top pick in 2023.

It places a lot of pressure on Fields, hoping for rapid development as he learns another new system. It could get ugly quick in Chi-town. Of the teams who selected a quarterback in the first round of last year’s draft, the Bears have given Fields by far the worst supporting cast. This is a fail.

Ouch. That’s the best way to describe the offseason Jerry Jones and the Dallas Cowboys had. They didn’t get to keep Randy Gregory, they offloaded Amari Cooper for pennies, without replacing him in their offense and their draft was filled with reaches. Fans of America’s team can’t be thrilled with the outcome. Coming up short in the playoffs, while they managed to retain their coaches, is there any reason to believe Mike McCarthy won’t find himself on the hot seat if they get off to a rough start?

Georgia Bulldogs defense was as good as we imagined

We all knew the Georgia Bulldogs defense was dominant. There’s a reason they were able to put the clamps on Bryce Young and the Alabama Crimson Tide in the College Football National Championship. But five defenders from their defense drafted in the first round? That’s a new NFL Draft record.

With all the smoke this offseason around Kyler Murray, Deebo Samuel, DK Metcalf and several others, there weren’t as many fireworks on draft night. Most of the biggest trades already occurred with Davante Adams and Tyreek Hill already gone, but still, as mentioned, Marquise Brown and AJ Brown getting shockingly traded raised plenty of eyebrows. Even though Mayfield and Jimmy G didn’t get traded, we saw plenty of stars change teams, it was just in the form of graduating from college to the pros, which is what the event is all about, making dreams into reality.