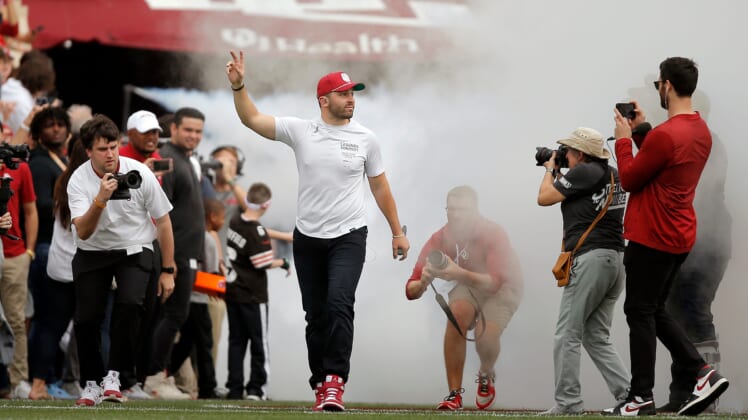 There was some belief Baker Mayfield could be traded shortly before the 2022 NFL Draft began, and if not then, it would happen at some point possibly on Day 2 once teams knew whether they missed out on their draft targets. Unfortunately for the No. 1 pick of the 2018 NFL Draft, he still remains a member of the Cleveland Browns.

But that isn’t expected to last long. After everything that’s happened in Cleveland between Mayfield and the team, there’s no way he’s still on the roster once training camp opens in late July. Having both Deshaun Watson and Mayfield in the same locker room could get awkward.

Instead, expect a franchise to swing a trade for the 27-year-old QB in short order. Here are the four best remaining Baker Mayfield trade destinations this offseason.

One team that’s been fairly quiet on the QB front all along is the Houston Texans. After making five picks in the first 75 selections, it was clear they didn’t have any intention of grabbing a quarterback in the 2022 NFL Draft. Maybe it means they’re all in on Davis Mills after nabbing him with their first pick in the 2021 NFL Draft at No. 67, or maybe they’ve been working behind the scenes, trying to trade for Mayfield or even Jimmy Garoppolo?

It makes sense for the Texans not to want to add yet another young developmental prospect while they continue to work with Mills, but adding a veteran with upside may be an entirely different story. With over $20 million in cap space, they could absorb the full amount of Mayfield’s salary and in doing so, would likely only cost a late-round draft pick by doing the Browns a big favor, they might even be able to get a pick just for doing so.

The Detroit Lions want players with grit, where toughness isn’t a question. For Mayfield, this could be the perfect fit. The only thing standing in his way, is another former No. 1 overall pick, in Jared Goff. There’s no chance for him to surpass Goff as QB1 by the start of the year, but if he struggles in any way, having a ready-made backup with a massive chip on his shoulder in Mayfield isn’t a bad backup plan.

It’s understandable that they didn’t want to take a young quarterback this season, creating some awkwardness, possibly noting that Goff isn’t their franchise solution, yet adding Mayfield this late in the process could also create some unneeded tension for a team that could be on the cusp of restoring their roar. Still seems like a strange fit.

Seattle Seahawks hope Mayfield can turn back the clock

Of all the teams left, the Seattle Seahawks continue to make the most sense for a potential Mayfield trade. Drew Lock is not an NFL QB1 and he never will be. Unless their priority is to piss off DK Metcalf and Tyler Lockett as they secure the No. 1 pick by Week 6, the Seahawks don’t yet have their starting quarterback on their roster.

Mayfield would instantly become their best option. A competitive, fiery spirit, he’d appear to be a strong fit with coach Pete Carroll. Is there some ego in there that Carroll doesn’t want to deal with? Possibly and maybe that’s what prevents a deal. But if I’m the Seahawks, I’d be willing to take the small risk on Mayfield. You never know how good he could be, if he can tap back into his rookie year form.

Related: Is a Baker Mayfield trade to the Seahawks still possible after Geno Smith re-signing?

Let’s get unconventional shall we? If there isn’t a team willing to let Mayfield compete to be the starter, his next best option might be landing with a top team, proving his worth as a top backup, staying ready for his second chance.

The Los Angeles Rams, by all appearances have the roster to run it back, hoping to add yet another Lombardi to their trophy case. Yet, if Matthew Stafford suffers an unfortunate injury, their season is cooked. Whereas if Mayfield was around, they’d still have a chance to advance in the postseason, giving him the strongest supporting cast of his career.

Biggest obstacle to overcome is his salary, with the Rams tight on cash. If they’re willing to say “F them picks” one more time, maybe a 2023 4th-round pick could entice the Browns to take on his full contract amount.