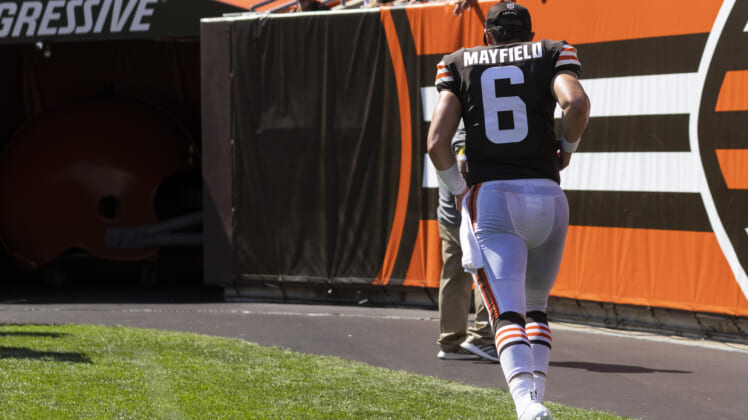 In a draft class where there isn’t a Trevor Lawrence or Joe Burrow, teams looking to land a franchise quarterback are tasked with turning over every stone as they search for a potential solution this late in the game. Even though veteran options such as Baker Mayfield and Jimmy Garoppolo remain available, the few teams left with a strong quarterback need have yet to make their move, preferring to wait out the draft.

The Houston Texans might be one of those teams. Despite having two first-round picks in the 2022 NFL Draft. One at No. 3 and one at No. 13. There isn’t an established top quarterback prospect, but that doesn’t mean there aren’t first-round options who could make sense at each of their two top picks.

Still, you’ll find few mock drafts that project general manager Nick Caserio to select a quarterback in the first round, why is that?

Mainly because the organization just selected Davis Mills last season with the 67th overall pick, which was actually their first selection in the 2021 NFL Draft. In some scenarios, this probably wouldn’t mean much in the grand scheme of things, but Mills actually impressed in limited action as a rookie on a roster devoid of talent.

Sure, his numbers don’t jump off the page, but there’s a foundation to work with. Get a few more playmakers, build the offensive line and see what this kid can do, right? No need to draft another prospect starting from scratch, requiring just as many resources to develop as Mills currently needs. There are even several NFL teams who would rank Mills higher than some of the top prospects in the 2022 quarterback draft class.

Can a franchise afford to focus on developing two young top quarterback prospects at the same time? Are there enough reps to go around?

Tough to say, but it may not make sense to have two players looking to prove their worth when there’s an option to take a chance on a veteran who already has a few things figured out, and is just looking for a different opportunity.

Baker Mayfield, Jimmy Garoppolo could interest Texans after the draft

One potential option to add to Lovie Smith’s depth chart in Houston without taking another rookie is by trading for either Baker Mayfield or Jimmy Garoppolo, who remain highly available.

Jeff Howe reports the Texans continue to view Mills highly, but could also get involved in the Mayfield or Jimmy G trade talks once the draft is through.

Yet, that’s exactly when other teams are expected to strengthen their pursuit for the two veteran quarterbacks. This means if a team like the Carolina Panthers, Atlanta Falcons, or Seattle Seahawks miss out on one of their top QB targets, they could also become intrigued with the possibility of adding the 2021 starters to their quarterback room as well.

Either way, neither Mayfield nor Garoppolo are likely to begin the 2022-23 season with their existing teams, yet organizations at this point are all focused on the draft. We should finally find out which teams both QBs will suit up for this year soon enough.