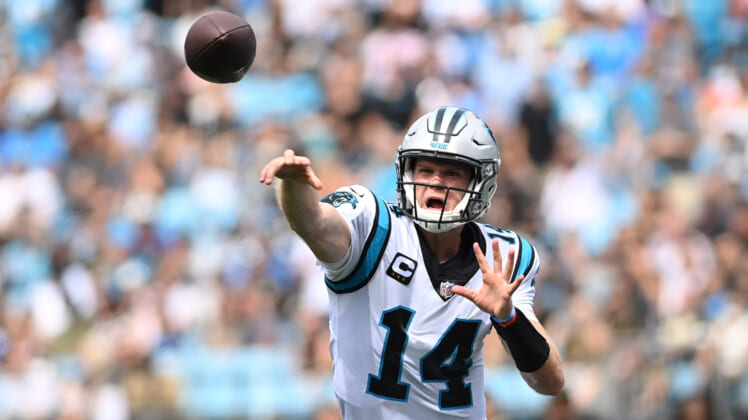 It’s the week of the 2022 NFL Draft and Carolina Panthers fans woke up to great news on Wednesday morning. We’ll defer to team owner David Tepper on this one, but suddenly the Panthers have a “very good quarterback in Sam Darnold“.

I didn’t know that. Did you know that?

We all knew they had Darnold after trading their No. 38 and 111th picks in addition to pick 226 last year, but nobody knew he was “very good”. Apparently, Tepper does.

In speaking to media ahead of Thursday’s 2022 NFL Draft, Tepper did his best to show his support for the quarterback currently atop the depth chart in Carolina. In doing so, he truly did say the words “I do think we have a very good quarterback in Sam Darnold.”

There’s no questioning Tepper’s wits, he owns a freaking football team, but maybe we leave the draft smokescreens up to others?

After an offseason flirting with Deshaun Watson and likely any other Pro Bowl quarterback who became available, now we’re being sold on the idea that Darnold has been the unquestioned QB1 all along? OK then.

Related: Carolina Panthers GM says 3 to 4 teams serious about trading up for their pick in NFL Draft

With the Panthers having the sixth selection in the 2022 NFL Draft, they have an opportunity to add an elite player in the top ten picks. Most mocks would point to them taking an offensive tackle or a quarterback.

Another alternative is a trade down to collect more draft capital since they only have six picks in total after making trades for players such as Darnold, CJ Henderson, and Stephon Gilmore a season ago.

A strong argument can be made to head in any of the three directions and come away with a much-improved squad heading into the 2022 season, but general manager Scott Fitterer, head coach Matt Rhule and Tepper all know this is a franchise-altering decision, one they cannot afford to botch.

This is why there’s been so much posturing ahead of draft day. They want teams to believe a little bit of everything. That they’re fascinated with quarterbacks, they want an offensive tackle, yet their ultimate goal is finding a trade partner to slightly move down, but no lower than the teens as Fitterer noted.

Who knows what story will become the truth on Thursday, but we’re at least a few hours closer to finding out.