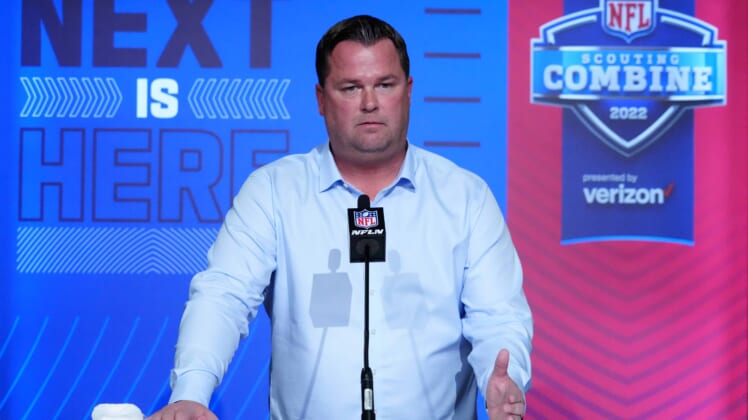 Carolina Panthers general manager Scott Fitterer says that there are several teams seriously interested in trading up to their spot at six on Thursday’s 2022 NFL Draft.

The Panthers are in an unusual spot that several teams find themselves in heading into tomorrow’s draft in Las Vegas. They own a top-10 pick but aren’t in love with the options available, in what looks to be a weaker-than-usual draft class. Especially when it comes to quarterbacks, which is a top need for Carolina heading into next season.

It is why there has been speculation for months that the Carolina Panthers could trade out of their pick at six and secure more selections later for a team that has upgrade needs all over the depth chart. During a Tuesday press conference to talk about the team’s plans for the draft, Fitterer revealed that he had talked to representatives from half the league in regards to trading for their pick. And that “maybe three to four” were serious about making a deal. 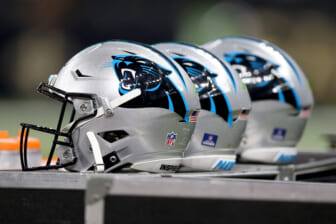 When Fitterer was asked how far down in the draft he’s willing to go, he explained that he would prefer to fall no further than the “teens.”

“I think the comfort level would be really in the teens,” Fitterer said [h/t Sports Illustrated]. “This is a large group, a unique group between that 25-50 range there are a lot of good players that are foundation-type players. You want to be disciplined not trading out of those levels, but I think the teens if I had to put a number on it, would probably be the most comfortable spot but you just have to weigh what’s on the table at the time.”

Who are the likely teams ‘serious’ about a trade for Carolina Panthers’ pick?

There are a few teams that have needs that could make them willing to trade up in the draft. However, the most likely options that could see the Panthers fall to the teens would be the New Orleans Saints, Houston Texans, and Philadelphia Eagles.

All three teams have two selections in the top-20 of the draft. The Eagles and Saints set of picks are in the teens. A package featuring those two picks could certainly sway Carolina to trade down and select a player that would not be a reach at six.

The Texans’ first pick is ahead of the Panthers at three. They may see a QB in this draft worth taking, just not that early. Offering up their pick at 13 and some later selections might also be a worthwhile decision for Carolina.