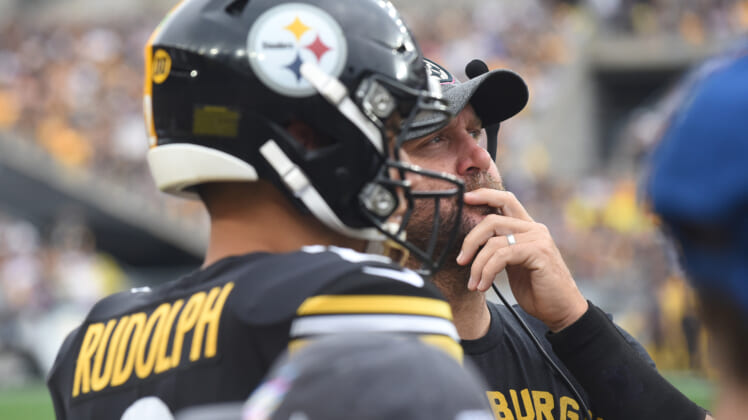 Ben Roethlisberger spent 18 seasons as the starting quarterback for the Pittsburgh Steelers, so he has a strong idea of what a leading signal-caller should look like under center. Now that he’s retired from the NFL, the Steelers had to resort to finding another QB1 for the first time since 2004.

Their solution so far has been to sign Mitch Trubisky in free agency, to go along with Mason Rudolph. Of course, Dwayne Haskins would have received strong consideration too, before his unfortunate tragedy occurred.

But not everyone believes that Trubisky is their so-called permanent solution to lead the team back to the playoffs in 2022 and beyond. In fact, you can count Big Ben as one of the people who believe the Steelers would be wise to select a quarterback with their first-round selection at No. 20 in tonight’s NFL Draft, if a top prospect is still available.

On Thursday, Roethlisberger had an interview with WDVE radio in which he expressed his thoughts on what the Steelers may decide to do later in the evening.

“Are either one of them going to be there?” he asked, referring to Pickett and Willis. “I just don’t know. If they are, I think that they would [pick them.] I don’t know. I don’t know. I know they got some linemen in free agency. Do they feel confident that those are the guys? There’s, I think, a chance that if you could get a really good center out there, you could go get him and move Kendrick [Green] to guard and sure up that line with Dan [Moore Jr.] and Kendrick and a rookie, another guy. You could have a good line for a long time and then find whatever quarterback you really want, whether it’s this year, later, or next year. I don’t know. I think you’ve just got to sure up certain spots first. But if that guy’s there and they love him, I’m sure they’ll take him.”

Nobody expects Roethlisberger to have a strong opinion formed either way on Trubisky just yet. He hasn’t gotten a chance since flaming out under Matt Nagy on the Chicago Bears, but Roethlisberger has seen plenty of Rudolph to get a feel for his future.

Never a fan of the front office taking a quarterback during his playing career, Big Ben is fully on board now that he’s out the door. Maybe the Steelers truly are enthralled with Trubisky, or maybe there is a quarterback they prefer in the top half of the first round this year. We’ll find out soon enough later tonight.