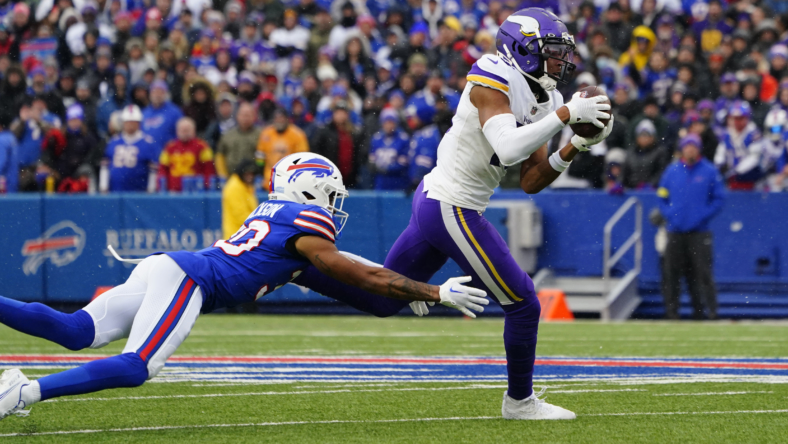 In a list that will be updated weekly throughout the 2022 season, we give you our NFL wide receiver rankings heading into Week 11.

Despite New Orleans’ quarterback issues, the first-round pick from Ohio State continues to perform at a high clip. In fact, he might very well be the NFL Offensive Rookie of the Year at this point. It helps when you’re on pace for nearly 1,200 yards.

However, quarterback issues in New Orleans has held this young man back. He caught just 3-of-5 targets in a Week 10 loss to the Pittsburgh Steelers. One wonders if a change from Andy Dalton to Jameis Winston would do Olave well.

Unfortunately, QB issues in Cleveland are also a problem here. Cooper was targeted just three times in last week’s loss to the Miami Dolphins. More than anyone, he has to be waiting for Deshaun Watson to make his long-awaited Browns debut in Week 13.

This recently-extended pass-catcher played a huge role in Washington’s Week 10 upset win over the previously undefeated Eagles. McLaurin caught 8-of-11 passes for 128 yards in the victory.

It’s just the continuation of a brilliant four-game stretch from the Ohio State product ater some initial struggles this season. McLaurin makes a long-awaited return appearance in our NFL wide receiver rankings after having caught 24 passes for 370 yards during that four-game span.

Samuel has been up and down after signing a massive contract extension this past offseason. After a pertty solid four-game stretch, the former All-Pro caught just two passes for 24 yards on six targets against the Los Angeles Chargers last week.

We’re especially interested to see how Samuel performs moving forward now that Christian McCaffrey is a member of the 49ers. The expectation is that he will see less snaps out of the backfield, creating more opportunities as a true receiver. That didn’t happen in Week 10, and it impacts him in our most-recent NFL wide receiver rankings.

After some initial struggles, Lamb has picked it up big time recently. That included Lamb catching 11 passes for 150 yards and two touchdowns in a Week 10 loss to the Green Bay Packers.

Through 10 weeks, Lamb is on pace to put up career-highs in receptions (100), receiving yards (1,333) and touchdowns (nine). Holding Lamb back some is the fact that Cowboys quarterbacks are completing just 60% of their passes when targeting him with three interceptions.

Fresh off a record eight consecutive 1,000-yard performances to open his career, Evans continues to do his thing with Tom Brady tossing him the rock in 2022. He’s been targeted double-digit times in three of the past four games, coming away with 25 receptions for 313 yards in the process.

However, Tampa Bay’s inability to get the ball down the field has impacted Evans big time. He’s also averaging what would be a career-low 2.7 yards after the catch. This impacts Evans some in our most-recent NFL wide receiver rankings heading into Week 11.

Brown is coming off ho-hum 66-yard performances over the past two outings. Despite this, he has proven himself as one of the top NFL wide receivers this season. He has four games with 85 receiving yards or more, including a 156-yard, three-touchdown outing against the Pittsburgh Steelers back in Week 8.

To say that Adams is frustrated by Vegas’ 2-7 start to the season would be an understatement. He just recently called out head coach Josh McDaniels for a less-than-stellar offensive game plan following an ugly Week 9 loss to the Jaguars.

Despite this, Adams’ numbers are still pretty darn good outside of what would be a career-low 60.3% catch rate. He’s currently on pace to catch 108 passes for nearly 1,500 yards with 15 touchdowns. Not too shabby.

After serving a six-game suspension, Hopkins has returned to dominate for Kyler Murray and the Cardinals.

Even after missing those first six games, Hopkins finds himself on pace to catch 121 passes for 1,441 yards. That’s simply incredible. Though, his four drops on 46 targets this season bests his total from the previous two years combined.

However, the stud youngster is coming off an absolutely brilliant two-game run that saw him catch 15 passes for 262 yards and four touchdowns. Chase is now sidelined for between 4-and-6 weeks due to a hip injury. That’s all sorts of unfortunate.

After a record-breaking 2021 campaign for the Rams, this reigning NFL Offensive Player of the Year and Super Bowl MVP has struggled to an extent catching passes from Matthew Stafford this season.

Even though he’s on pace to put up some otherworldly numbers once again, it must be noted that Stafford has thrown a resounding four interceptions when targeting Kupp. It’s more about Stafford forcing the ball to his top target without any other real receiving threats. Now that Kupp is on injured reserve with an ankle injury, there’s concern he’s played his last game this season. That’s a damn shame.

Waddle has been even better as a sophomore, providing improved quarterback Tua Tagovailoa with another electric target. He’s coming off a five-game span in which the youngster has caught 27-of-36 targets for 474 yards with three touchdowns. Waddle now finds himself on pace for 1,500 receiving yards this season.

Diggs has picked it up again in 2022, finding himself on pace to catch 128 passes for 1,820 yards and 15 touchdowns. He’s also averaging a robust 4.5 yards after the catch with Josh Allen tallying a 127.7 QB rating when targeting him.

This has been taken to a whole new level in Hill’s first season with Miami. How good has the All-Pro been through 10 weeks? He’s now on pace to break the single-season NFL record with 2,085 yards. That’s just insane.

The 2022 season has been about as good for Mr. Jefferson. After some struggles in September, he’s been on a whole new level recently. Over the course of the past six games, Jefferson has caught 51-of-71 targets for 814 yards. He’s now on pace to catch 130 passes for north of 2,000 yards. Put some respect on this kid’s name, he’s already the NFL’s best receiver.