Fans tuning in to watch today’s AFC Championship matchup between the Cincinnati Bengals and Kansas City Chiefs didn’t have to wait long to see Patrick Mahomes strike for a quick score.

After a three-and-out on the Bengals’ first possession, the Chiefs received the ball at their own 16-yard line, needing to go 84 yards to score. Well, they did, six minutes and 11 plays later.

On first-and-goal, Mahomes dropped back and rolled out to his right, searching before he found Tyreek Hill running along the back of the endzone, where Mahomes fired the football in for the 10-yard touchdown.

It marked the first time in Patrick Mahomes’ playoff career that he threw a drive-opening touchdown pass according to Jim Nantz of CBS. It’s safe to say, it won’t be the last. Mahomes has reached the Super Bowl in two of his first three seasons as the Chiefs’ starting quarterback. Can he make it to the promised land in three of his first four seasons? Millions of onlookers are tuning in today to find out.

Whoever wins, gets to go to the Super Bowl on Feb. 13. So far, the Chiefs lead 7-0 thanks to the arm of Mahomes. 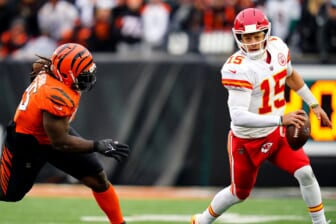