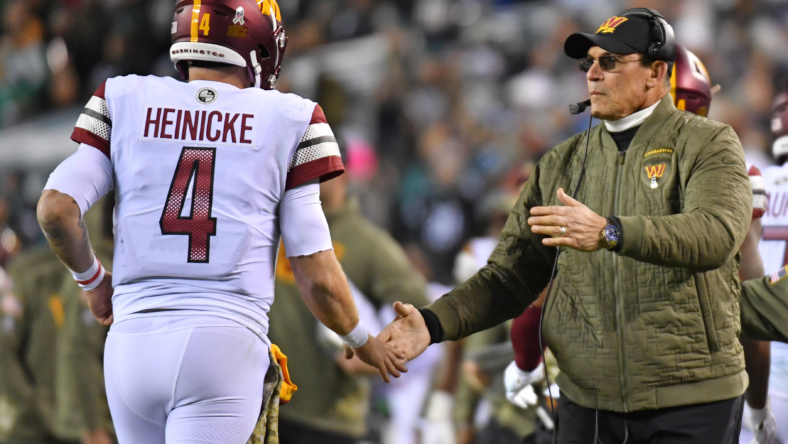 The Washington Commanders came into Monday night’s game against the undefeated Philadelphia Eagles with fans and media alike giving them little chance of winning. What’s crazy is even when checking in on the fantasy value of any number of Eagles’ playmakers included some kind of snooty knock of the Commanders and their “bottom-five defense.”

But sitting at a record of 4-5 upon touching down in Philly, it’s probably fair to say that even giving Washington a puncher’s chance was a bit of a stretch, right? Wrong.

The Commanders took down the Eagles in wild fashion in a tale of two entirely different halfs of football by a final score of 32-21.

Thankfully, that noted bottom-five defense only spent roughly six, yes six, minutes on the field during the entire first half. Dare I say the Commanders were in total and complete command?

The ground game led by Brian Robinson — who simply would not be denied — was humming along nicely, the defense delivered a circus act of an interception off of Jalen Hurts, and Washington Commanders quarterback Taylor Heinicke was balling out locked-in receiver Terry McLaurin.

The noted interception that was hauled in by Washington cornerback Darrick Forrest was patently ridiculous and worth another look as we watch with our collective mouths agape.

The following throw only led to a field goal, but it’s just not possible to place the ball any more perfectly than what Taylor Heinicke did here. Absolutely bonkers.

This one just felt different. With a silenced, frankly shaken crowd coupled with the Eagles making uncharacteristic mistakes left and right, you could basically smell the upset cooking.

Give credit where credit is due. The Commanders were aggressive and the defense was out there finishing every play with next-level effort that reeked of a destined upset.

Did I mention kicker Joe Slye hit from 58 and 55? Well, he did. Every single facet of the Commanders was great in this one, but the forthcoming Tweet below is the real kicker.

Taylor Heinicke, on third-and-seven and with the clock bleeding away in the fourth quarter, took an intentional knee only to be clobbered for an unnecessary roughness call which more or less clinched the game.

A truly unbelievable sequence of events we have here, folks.

In the spirit of spoiling the undefeated season with extra sauce, the Commanders scored a touchdown as time expired after a lateral attempt by the Eagles went awry leading to an especially brutal ending for Philly and a very silent and stunned crowd at “The Link.”

Of course, the annual tradition must be followed, so cheers to the 1972 Miami Dolphins once again.

Well, this is one way to put it and consider this Tweet 100 percent approved, Washington Commaders.

There were other reactions, too.