How To Watch the Alabama Crimson Tide Live Games in 2022 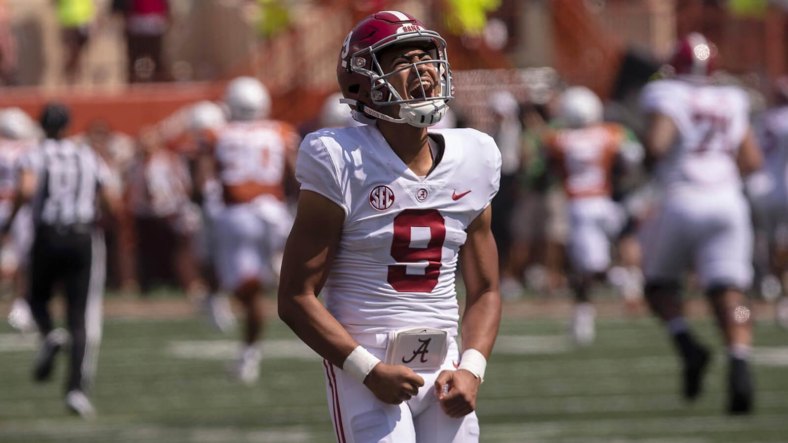 For a lot of people, there’s no greater game or rivalry in all of sports than Auburn University versus the University of Alabama. All of Alabama football hinges around it, and households are divided by it. Thanksgiving can get downright nasty sometimes if the subject of football comes up. If you want to know how to watch Alabama Crimson Tide football without cable, you’re in the right place.

The best places to watch Alabama Crimson Tide football are on ABC, CBS, and NBC, but you can also watch it on dedicated sports channels like the SEC Network. It’s better to stream the games because then you have complete control over when and where you watch, especially with additional features like Cloud DVR. Six main streaming services stand out: Sling TV, FuboTV, Hulu + Live TV, Youtube TV, Vidgo, and DIRECTV STREAM.

Sling TV has three base plans to choose from, but Sling Orange is the best for NCAA football (including Alabama football). It gives you 31 channels, including ESPN, for just $35 per month. If you want the best sports channels, you’ll need the Sports Extra add-on — an additional $11 per month that includes the SEC Network and ESPNU. There’s no free trial, but the good news is that you can get half off your first month.

If you’re looking for something a little more, try out Sling Blue. It’s aimed at pro football and includes 41 channels for the same price. You can get the best of both worlds with Sling Orange & Blue for $50 per month, giving you 47 channels.

FuboTV is one of the best options for streaming sports. Not only does it include a massive number of channels, but it provides access to nearly every sports-specific network, including the SEC Network. There are three main plans: Pro, Elite, and Ultimate, but the Pro plan includes everything you need. At $69.99 per month, it gives access to 124+ channels and 1,000 hours of Cloud DVR space. Most importantly, the FuboTV Pro plan includes ABC, CBS, and the SEC Network.

The Elite Plan offers 178+ channels for $79.99 per month, while the Ultimate Plan has 214+ channels for $99.99 per month. There are also additional add-ons that come with the Ultimate Plan. If you want more content outside of sports, a higher-tier plan is the way to go. If sports is your only streaming need, the Pro plan strikes the best balance between content and affordability.

Hulu + Live TV has two main plans: the ad-supported version at $69.99 per month and the ad-free option at $75.99 per month. Both include the same 75+ channels, including ABC, the SEC Network, CBS, and more. The good news is that Hulu + Live TV gives you easy access to all the channels that carry Alabama football without needing any add-on.

The bonus of Hulu + Live TV is that it also comes with Disney Plus and ESPN Plus, so you have plenty of family-friendly content when you aren’t watching football. Hulu + Live TV is currently giving new subscribers $20 off of the first three months, so you can try it out for less.

YouTube TV brings with it 85+ channels for just $64.99 per month. It’s hard to nail down the exact channel count because it’s based on your ZIP code, but it includes ABC, CBS Sports, and the SEC Network. Of course, there are plenty of other channels to choose from, like ESPN and FS1.

YouTube TV also has a free trial so that you can test the waters. If you already have a Gmail account, it’s easy to sign up. If you don’t, just make one, and you can get started watching Alabama football in no time. A current promotion brings the cost down to just $54.99 for the first three months after your free trial ends.

Vidgo prides itself on being one of the most user-friendly streaming services since it requires no contracts and is completely transparent on pricing. With two packages that range in price from $59.95 per month to $79.95 per month, subscribers also receive 20 hours of free DVR, at least 110 live channels, and on-demand content.

Both tiers include the SEC Network so that you can keep up with your favorite Alabama football teams. Currently, there is no free trial offer for Vidgo, but keep checking back in case a promotion pops up.

DIRECTV STREAM says it has more regional sports networks than any other streaming TV provider, which also means it has the SEC Network — perfect for any Alabama fans that can’t wait to see the Crimson Tide roll over the competition. With four different packages to choose from, there’s a DIRECTV STREAM option for every price point.

The service also offers a five-day free trial, so you can try the service out for yourself before signing up. DIRECTV STREAM also includes HBO Max, SHOWTIME, STARZ, and EPIX free for the first three months.

If you want to stay current with all of Alabama football, you can find the up-to-date schedule on ESPN.com.

Let the rivalries continue, and catch every game

If you’re a fan of Alabama football, you owe it to yourself to stream every game. The features that come with streaming services, plus the easy availability of the games anytime, anywhere, make it much better than watching on cable. If you know how to watch Alabama football on your mobile device, you’ll never miss a game.

How do I watch the Alabama football game?

Just tune in to the right channel at the right time, and you can catch your favorite team. Just make sure you’re wearing crimson when you do.

How do I watch Alabama football without cable?

CBS and ESPN broadcast most Alabama football games, but you can also catch a few on ABC, ESPN, and other channels.