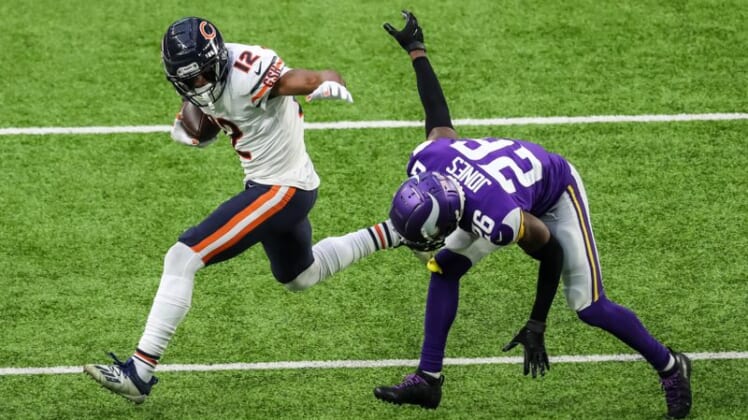 We’ve heard rumors about a potential Allen Robinson trade over the past several weeks. None of that was a real possibility until the Chicago Bears star wide receiver signed the franchise tag his organization placed on him.

After being handed the tag earlier in March, reports surfaced that he was in no hurry to sign on the dotted line — guaranteeing the Pro Bowler a whopping $17.88 million in 2021.

There’s a pretty big backdrop to all of this. Allen Robinson is not happy with the Bears. It led to rumors of a potential trade ahead of last season’s deadline. Part of the reason Robinson isn’t happy in Chicago has been disastrous quarterback play in recent seasons. Dalton might be a solid veteran option, but he’s not the elite talent the Bears were said to be targeting in Russell Wilson and Deshaun Watson.

So, why did Allen Robinson sign franchise tag tender?

For Chicago, it’s an either/or proposition. The team does not have room under the 2021 NFL salary cap to keep Robinson on his tender and sign Golladay.

This likely means that Robinson saw the possibility that Chicago would rescind the franchise tag. By signing it, he eliminated this possibility. Given the less-than-stellar cap situations multiple teams are in and the cash that has been thrown around during the first few days of NFL free agency, there’s no reason to believe Robinson would earn north of $17 million annually on a long-term contract if the Bears had rescinded said tag.

It’s pretty much a cat-and-mouse game between the two sides. Allen Robinson does not want to play for Chicago, either on the franchise tag or a long-term deal. Meanwhile, the Bears’ brass is likely attempting to bluff its way into forcing Robinson back next season. That’s highly unlikely to happen.

Will an Allen Robinson trade happen?

Previously in the NFL offseason, reports surfaced that the Bears were considering placing the above-mentioned tag on Robinson with the sole purpose of trading him. Given that Chicago has been in cost-cutting mode all offseason and with Robinson having signed the tender, this now becomes increasingly likely.

We’re talking about a 27-year-old wide receiver who has caught a combined 200 passes for 2,397 yards over the past two seasons. Robinson has done that while catching passes from a less-than-stellar group of quarterbacks in Chicago. If placed on the trade block, he will have ample interested.

Teams that make the most sense in an Allen Robinson trade