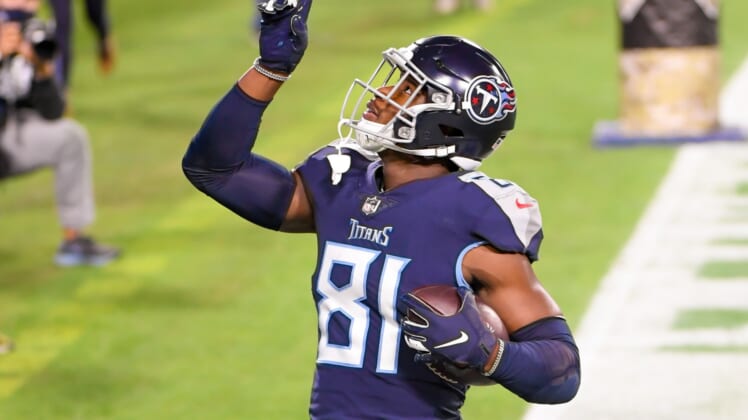 The Patriots’ offense took a massive step back in 2020, due to both the departure of Tom Brady and a completely underwhelming cast of offensive weapons. With more than $70 million in cap space this spring, Bill Belichick and Co. planned to overhaul the depth chart by bringing in young, athletics pass-catchers who could provide a spark for the passing game.

While many fans were disappointed after the team re-signed Cam Newton, New England will likely be rocking with excitement after the signing of one of the NFL’s best tight ends.

According to ESPN’s Adam Schefter, the Patriots are signing Smith to a four-year contract worth $50 million. The deal, which includes $31.25 million fully guaranteed, immediately takes one of the top free-agent talents off the board.

Smith, a third-round pick in the 2017 NFL Draft, was often underutilized by the Tennessee Titans. He set career-highs in receptions (41), receiving yards (448) and touchdowns (eight) this past season, but the 6-foot-3 tight end wanted to find an expanded role with a new team. Not only will he become one of the highest-paid tight ends in the NFL, but the 25-year-old will also be the top weapon in New England’s offense.

The $50 million total value of the contract is the fifth-largest deal among tight ends right now. Additionally, the $12.5 million average salary ranks third, just behind George Kittle ($15 million) and Travis Kelce ($14.31 million). While it’s a high price to pay, based off the statistics, Smith should live up to the contract for the Patriots.

He isn’t just an offensive weapon, although his size and speed make him a matchup nightmare for linebackers. Smith is comfortable as a blocker, a valuable trait for the Patriots entering 2021. With Newton likely under center and a reshaped offensive line, New England is expected to use a run-heavy offense that also utilizes the play-action attack next season.

The Patriots haven’t had a reliable pass-catching option at tight end since Rob Gronkowski in 2018. With this new addition, fans can look forward to this offense being far more exciting. Whether Newton, Trey Lance or Jimmy Garoppolo is under center in 2021, this passing game will be significantly better than what everyone witnessed this past season.