Patriots rumors suggest the team could be the favorites to land Houston Texans quarterback Deshaun Watson. Here's what it would mean to New England. 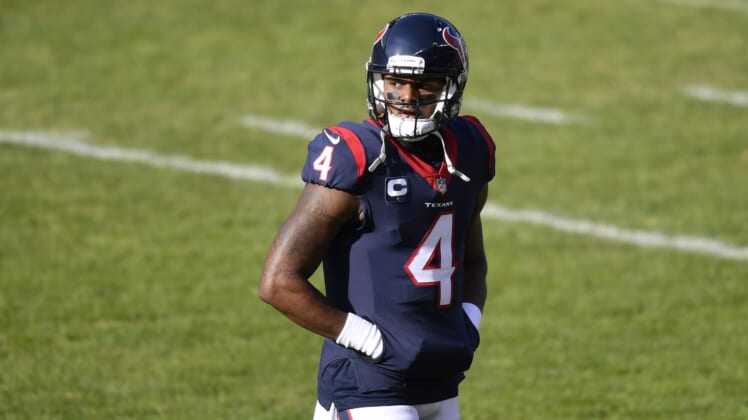 Patriots rumors: The New England Patriots go into the 2021 season looking to climb their way back up as one of the NFL’s elite teams. One of the biggest questions that need to be answered is who will be playing quarterback for the Patriots next season.

There have been rumors that Cam Newton could return to the Patriots and he might be their best option for them when it comes to continuity. However, the best quarterback available this offseason Deshaun Watson could be an option for a team looking to land a quarterback that helps bring them to a Super Bowl.

One former NFL executive predicted that once the sweepstakes for Watson are officially open, the Patriots should be the favorites to land the star 25-year-old quarterback.

Patriots rumors: Deshaun Watson could be traded to New England

Reports have suggested that Houston’s asking price may be way out of New England’s price range as they search for a new quarterback. It could lead the organization to explore cheaper alternatives. Among them, rumors have linked Marcus Mariota to the team as the Raiders shop him around the league.

A Deshaun Watson trade would mean a lot for the New England Patriots’ Super Bowl chances in their second year without Tom Brady. The Patriots are viewed as a team that’s far away from contention, but Watson could accelerate that process.

Bill Belichick has been at the wrong end of the conversation lately when it comes to winning and Brady just won his first Super Bowl without the legendary head coach. You know it might bug Belichick that Brady has been this successful shortly after their divorce.

All of the Patriots’ opt-out players are expected to return in 2021 and they have significant cap space, projected at $64.59 million. The Patriots could still acquire Watson and sign weapons around him such as Allen Robinson or Chris Godwin. Wherever Watson goes, free agents will most likely want to follow.

The connection between Nick Caserio and the Patriots cannot be underestimated. He could eye some of the Patriots players such as Stephon Gilmore. Maybe, Caserio can put in a good word the Patriots and convince Watson that it would be a great fit.

Either way, the Patriots need to find a quarterback for next season, whether it’s through free agency or the trade market. Maybe, Belichick would go all-in on Watson, but maybe he could focus on someone like Jimmy Garoppolo or Jacoby Brissett.