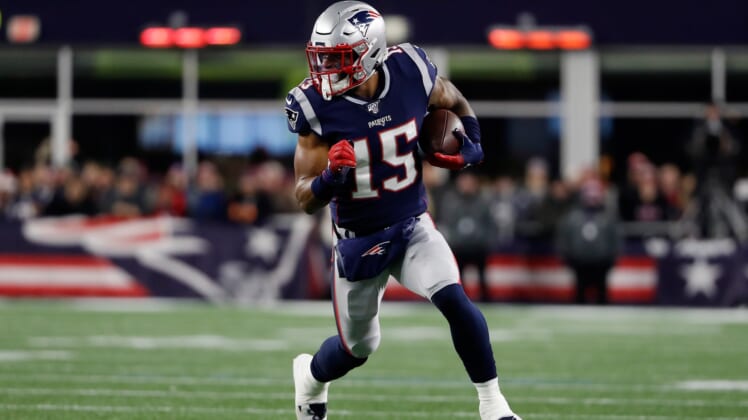 Thus far on the young NFL offseason, New England Patriots rumors have focused primarily on the quarterback position. It makes sense given how much Cam Newton struggled under center in 2020.

With that said, the Patriots need to add more skill-position talent. Former first-round picks, running back Sony Michel and wide receiver N’Keal Harry, just have not panned out. It’s one of the primary reasons New England is coming off its first losing season since all the way back in 2010.

It now looks like the Patriots could move off one of these former first-round busts after just two seasons with the team.

According to NFL Media’s Mike Garafolo, teams have reached out to New England about a potential Harry trade. The team is also reportedly receptive to the idea.

Selected by New England with the final pick in the first round of the 2019 NFL Draft after a stellar career at Arizona State, the 6-foot-4 Harry just has not panned out. This past season saw him catch just 33 passes for 309 yards in 14 games. Even more glaring, he hauled in just 57.9% of his targets.

With that said, these Patriots rumors make sense. Other teams are intrigued by Harry’s build and ability to become a top-end possession receiver in the NFL.

It also must be noted that the still-young 23-year-old Harry was forced to catch passes from Cam Newton a season ago. Newton threw all of eight touchdown passes in 15 starts. That’s completely unheard of in today’s pass-first league.

The biggest question here would be value. Despite his struggles, New England is not going to give the former first-round pick away for nothing. At this point, a third-round pick in 2021 and conditional mid-round pick in 2022 would seem to be the going rate.

If that is indeed the case, a number of teams would have interest in the big-bodied pass-catcher. Among them, the Las Vegas Raiders are looking for another receiver to team up with Henry Ruggs after moving on from free-agent bust Tyrell Williams. Harry would fit the bill as a boundary receiver to go with Ruggs on the outside and Hunter Renfrow in the slot.

The Green Bay Packers are going to be in the market for a wide receiver during NFL free agency. The same thing can be said for the Miami Dolphins. However, it’s not known whether New England would trade Harry within the division.

New England currently finds itself an estimated $70.12 million under the 2021 NFL salary cap. That’s a whole heck of a lot to spend without much in terms of priority re-signs when it comes to the team’s internal free agents.

Sure acquiring a quarterback like Jimmy Garoppolo would cut into that. Even then, Bill Belichick and Co. will have a ton of room to upgrade at the skill positions. Specifically, wide receiver is absolutely loaded heading into NFL free agency.

If the Patriots were to move off N’Keal Harry, they’d be able to find immediate upgrades on the open market. The likes of JuJu Smith-Schuster, Will Fuller, T.Y. Hilton, Curtis Samuel and Kenny Golladay come to mind first. Heck, it wouldn’t be a surprise if the Pats added two starter-caliber receivers.