With the 2021 season just about to kick off, fan bases for all 32 NFL teams are brimming with unbridled optimism about their teams. The reality is, most franchises will end the year disappointed, but several sleepers stand out as clubs worth backing to vastly exceed consensus expectations.

Here’s a look at five legitimate sleeper NFL teams who, if things break the right way, have the chance to stun everyone in pro football this year, with odds to make the playoffs courtesy of DraftKings.

Bill Belichick is probably pretty tired of hearing about how great Tom Brady is without him, and how TB12 won their split in a runaway after leading the Tampa Bay Buccaneers to a Super Bowl LV win.

Belichick came off a 7-9 record last season and proceeded to go on an absolute spending spree in free agency. The New England Patriots’ pass-catchers have been upgraded in a big way, and following the draft, Brady’s official heir apparent, Mac Jones, arrived and beat out Cam Newton for the starting job in training camp.

By all accounts, Jones’ elite football IQ and accuracy have wowed the Patriots. He’s fully ready to be a starter, or so it seems. If Jones proves to be as good as advertised, and Belichick’s defense plays to its typical high standard, not only will New England challenge for a playoff spot, but the Pats could be a legitimately dangerous postseason team.

One of the most overlooked, underrated and brilliant coaching moves of the offseason came from the Atlanta Falcons.

As great as it is to give Falcons QB Matt Ryan his first-ever offensive-minded head coach in Arthur Smith, the big change of note was the hiring of defensive coordinator Dean Pees.

Lured out of retirement by Smith due to their shared connection from Tennessee, Pees is an exotic defensive schemer who can bring simulated pressure and exotic blitzes with the best of them. Atlanta’s perpetually maligned pass rush needs someone like Pees to shake things up and confuse opponents. 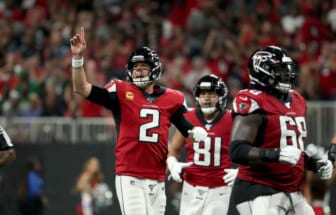 Although Julio Jones got traded to the Titans, Smith’s system should take some heat off Matty Ice due to its effort to establish the run, something that’s been lacking in recent years for the Falcons.

Plus, rookie tight end Kyle Pitts is a complete matchup nightmare, as is Calvin Ridley, who could become the NFL’s leading receiver in 2021 with Jones out of the picture.

This is all about Justin Fields. If the Chicago Bears have the guts to bench veteran Andy Dalton for the first-round pick out of Ohio State, it’d be a total game-changer for this franchise’s fortunes in 2021.

Fields is the most talented signal-caller Chicago has ever had. His game-breaking speed, downfield throwing accuracy and composure are all excellent. He’s unafraid of the big stage, and his toughness is absolutely unquestionable.

Bears head coach Matt Nagy has likened his Dalton-Fields dilemma to his time with the Kansas City Chiefs, when he witnessed Patrick Mahomes sit for a year behind Alex Smith before taking the reins and winning league MVP.

Nagy apparently doesn’t grasp how apples-to-oranges of a comparison this is. Smith was in a proven system for multiple years, and had guided the Chiefs to the postseason. He played at an MVP-caliber level in his final season with Kansas City. 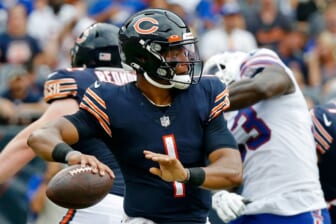 Dalton’s playoff record with the Cincinnati Bengals is straight-up ugly. The jury is still out on Nagy as a play-caller.

Starting Dalton for more than the first few games would mean the Bears waste another year of Khalil Mack’s prime and a playoff-caliber defense. They’d also put any chance of retaining star wide receiver Allen Robinson out of reach, in all likelihood.

Should Fields get the nod — and it could happen after the Bears face Aaron Donald and the Los Angeles Rams in Week 1 — there’s a real chance Chicago could make some noise and improbably return to the postseason.

See where the Bears fall in our latest NFL defense rankings

The NFC East is still not a very good division. It’s arguably the worst, as the Washington Football Team took the crown in 2020 with a 7-9 record.

Every team in that cluster seems to have improved, but the Eagles’ hopes hinge on Jalen Hurts and a young cast of unproven skill players.

Rookie Heisman Trophy winner DeVonta Smith is reuniting with Hurts from their college days at Alabama, Quez Watkins had a meteoric rise up the depth chart in training camp, and his fellow second-year wideout, Jalen Reagor, looks to be living up to the first-round hype entering Week 1. 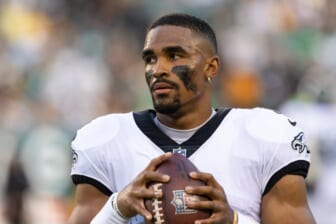 Also Read:
Philadelphia Eagles players ‘blown away’ by Jalen Hurts on and off field

An absolutely loaded, deep defensive front led by Fletcher Cox and a solid linebacker corps give Philly a stout front seven. This offseason, they upgraded on the back end, getting a bargain deal for standout safety Anthony Harris and cornerback Steven Nelson.

Smith has the short-area quickness to create separation underneath, and the same goes for Reagor, who’s a year further into his development and should complement Smith nicely. Watkins is an X-factor with excellent speed to take the top off a defense.

For the Eagles, they just need to give Hurts some easier, shorter throws, let his threat to run aid the rushing attack, and allow their excellent defensive line to feast on opposing QBs. In an NFC East that feels very much up for grabs, that sounds like a decent winning formula.

Little has been wrong with the Las Vegas Raiders offensively. Derek Carr is playing like a legitimate top-10 QB under Jon Gruden, and tight end Darren Waller is a legitimate superstar.

The problems lie in the defense. A series of whiffed draft picks and misguided free-agent transactions have left the cupboard bare of talent on that side of the ball over the past several seasons.

Las Vegas might be reaching a turning point in that area. Some would argue it’s a patchwork veteran crew that’s been assembled, but pairing a gifted pass-rusher like Yannick Ngakoue opposite Maxx Crosby on the edge gives the Raiders two double-digit sack artists.

If the Silver and Black get anything on the interior defensive line out of Gerald McCoy, that’ll be a huge win. They also recently added linebacker K.J. Wright to the mix. He starred for years with the Seattle Seahawks, and needs no time to get up to speed with ex-Seahawks defensive coordinator Gus Bradley’s base Cover 3 scheme. 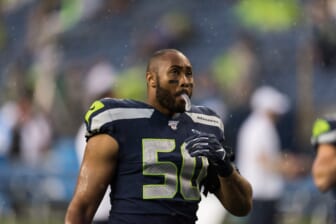 Casey Hayward came over from the AFC West rival Los Angeles Chargers to give Las Vegas a necessary, experienced vet in the secondary. If any of the Raiders’ young defensive backs, particularly rookie free safety Trevon Moehrig, can take after Hayward’s example on how to be a pro, Las Vegas could start really jelling.

Playing in such a loaded division, facing the likes of Mahomes, the Chargers’ Justin Herbert and another elite defense in the Denver Broncos isn’t going to make life easy for the Raiders. Just don’t be surprised if they work their way into the playoffs, just as the strongest Gruden doubters prepare to celebrate another lost year.