A number of NFL futures bets can be placed well in advance of the 2021 NFL season, but Super Bowl odds are where the real market value is in sports betting.

Yes, trying to pick the Lombardi Trophy winner out of 32 teams is a difficult task, yet a lot of clubs can be ruled out from the jump. Consider that a $100 bet on the No. 1 favorite, the Kansas City Chiefs, would yield a $500 profit at +500 odds.

The NFL preseason has arrived, so let’s take a look at the latest Super Bowl odds from DraftKings. With those lines in mind, we’ll break down several teams whose odds present the best value while the numbers are still rather raw.

Click here for our NFL playoff predictions. You might be surprised by who we’re picking to win Super Bowl LVI

Tom Brady completely changed the culture in Tampa Bay in just one season. From the chaotic Jameis Winston era to the greatness of TB12, the Bucs came together late in 2020 and won eight straight en route to a Super Bowl LV triumph.

Picking one of the top two favorites admittedly isn’t the best value, but in Tampa’s case, it’s worth a flier. After all, Brady has played in four of the last five Super Bowls, and the Bucs roster is way more talented than anything he was working with toward the end of his time with the New England Patriots. 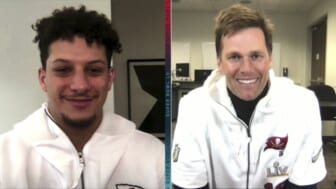 Tampa Bay somehow kept all its starters on offense and defense, not to mention its top coordinators. That continuity, and a fuller offseason program in 2021, is going to help the Bucs be much more consistent this season.

A longer, 17-game season and the fact that Brady had rather serious knee surgery in the offseason are causes for concern. That said, Brady is the ultimate iron man, and until the wheels actually fall off, history tells us it’s never wise to doubt the GOAT.

One final reason to bet on the Patriots, the NFC offers a much easier path than the AFC. While the Chiefs face potential matchups in the playoffs against the Buffalo, Bills, Cleveland Browns and Baltimore Ravens, the road to Super Bowl LVI would be much smoother for Tampa Bay. Outside of the Green Bay Packers and Los Angeles Rams, Sportsnaut’s latest NFL power rankings make the case why there are more flawed teams in this conference.

Just before the 2021 NFL Draft, DraftKings had the Browns at +2000, so it’s telling that oddsmakers have already shortened Cleveland’s odds. That means its rookie class is viewed as one that can make an instant impact, headlined by cornerback Greg Newsome II, playmaking linebacker Jeremiah Owusu-Koramoah and world-class sprinter/receiver Anthony Schwartz.

But even if the Browns got zilch from their incoming first-year players, they so thoroughly crushed free agency that they’d still be in the running for a Super Bowl.

It’ll be the second season that quarterback Baker Mayfield is in reigning Coach of the Year Kevin Stefanski’s offense. With an excellent backfield featuring Nick Chubb and Kareem Hunt, and a strong receiving corps that’ll welcome back Odell Beckham Jr. from injury, Mayfield has all the means to thrive.

If you’re betting on the Browns to win the Super Bowl, it’s not the joke wager it would’ve been in years past. This team is for real, and should be hosting a playoff game after winning the AFC North. 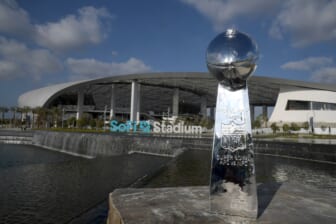 Maybe Bill Belichick saw how Brady thrived in Tampa Bay and thought, “Hey, maybe I should add some talent to my roster.”

Belichick insisted that the New England Patriots were going all-in while Brady was still around, and that an underwhelming 7-9 campaign last season was the fallout from that. Well, The Hoodie is obviously going full-tilt to return to his Super Bowl-winning ways.

An exceptional free-agent spending spree saw Belichick bring aboard two excellent tight ends in Hunter Henry and Jonnu Smith. Their versatility and ability to create matchup problems as pass-catchers is going to make everything so much easier for the offense.

Now we know, too, that Belichick is rolling with Mac Jones at quarterback, counting on the rookie to deliver the goods. Cam Newton got cut, and it’s clear Jones is a better fit in the Pats’ system. He’s much more in the mold of Brady as a pure pocket passer with immaculate accuracy and a wildly advanced football IQ. 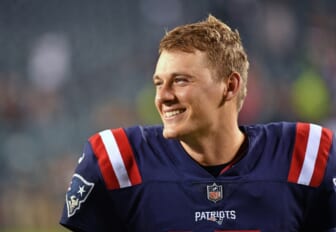 Jones straight-up blew everyone away and beat Newton out. Belichick is coming back with a vengeance after hearing about how Brady was the chief catalyst for New England’s dynasty.

Somehow, the most accomplished coach ever has a chip on his shoulder now. That makes the Patriots an excellent long-shot Super Bowl bet.

Think about Ryan Fitzpatrick‘s career for a moment: All the starting opportunities he’s had that have fallen by the wayside, and none of them were anywhere near as favorable as what he has in Washington. Sadly, he got injured in Week 1, but Taylor Heinicke proved in Week 2 that he can play well enough to win, even when the defense is lacking.

The Football Team has an excellent D led by second-year stud Chase Young and a terrorizing front. They upgraded their secondary with the free-agent acquisition of William Jackson III. That unit should absolutely be one of the best in football.

We know the NFC East is the worst division in the league. Washington won it this past year with a 7-9 record. Now that head coach Ron Rivera has established himself and gotten the dysfunctional organization headed in the right direction, he has a savvy veteran leader in Fitzpatrick to captain the ship.

Will Washington win the NFC East again? Here are our full predictions for the Football Team in 2021

Fitzpatrick should have a ball throwing to them behind an offensive line that was ranked sixth by Pro Football Focus in 2020 and improved at left tackle by signing Charles Leno Jr., not to mention drafting Samuel Cosmi in Round 2.

After putting up a strong fight in the playoffs against the Buccaneers with Heinicke at QB, Washington can build on that, appropriately deploy its multitude of roster upgrades and truly become a factor in the NFC — and quite possibly, the Super Bowl chase. Odds of +6500 are more than generous enough to place a small bet.

Does Washington have the best D in the league? Find out in our NFL defense rankings

There is once again hype around the Pittsburgh Steelers this season, especially after their Week 1 win at Buffalo. While the Steelers definitely have a championship-caliber defense, their offensive line is suspect in front of QB Ben Roethlisberger, and even rookie first-round tailback Najee Harris isn’t special enough to spark the league’s reigning last-ranked rushing offense well enough for Pittsburgh to avoid becoming predictable on offense.

As for the Tennessee Titans, they could easily win the division and we respect one of the best offenses in the NFL. Derrick Henry proved he can carry this team in the cold elements and an electric passing attack now boasts Julio Jones. But the defense is bad, and there are no signs of it getting better after getting rolled by Arizona in Week 1. Given the Titans couldn’t avoid the Chiefs and Bills in the playoffs, even winning the AFC is improbable.