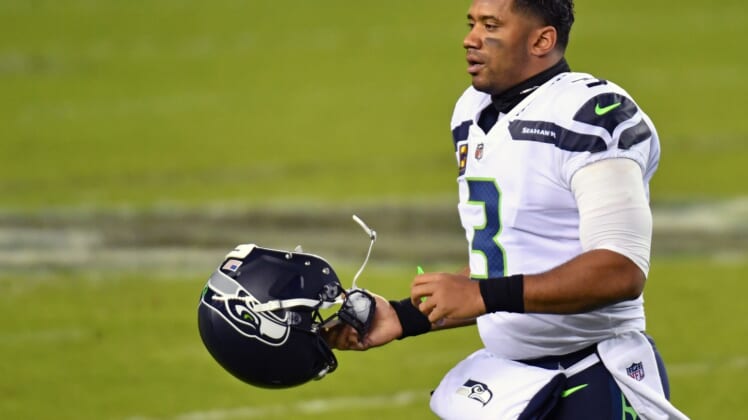 Russell Wilson took a page out of Deshaun Watson‘s playbook by turning up the pressure on the front office by expressing his displeasure with the organization publicly. It’s fueled rampant trade rumors, with teams around the league calling Seattle hoping to convince general manager John Schneider to swing a blockbuster deal.

Seattle hasn’t exactly squashed the speculation. The front office is listening to offers, not taking the hard-line approach we’ve seen from the Houston Texans with Watson. Meanwhile, the drama between Wilson and the Seahawks keeps intensifying with recent reports that the feelings between both sides are not in a good spot.

Here’s the latest on where things stand for a potential Russell Wilson trade.

Seattle Seahawks rumors: Russell Wilson unlikely to be traded in 2021

ESPN’s Dan Graziano shared Friday that the Seahawks haven’t even started internal discussions about what would happen if they traded Wilson and who alternatives at quarterback might be. An even bigger problem, there would be a $39 million dead cap hit if a trade is made and that’s not something the organization wants.

It’s important to weigh the salary ramifications from a blockbuster deal. The Seahawks are currently just $11 million over the projected 2021 NFL salary cap, a figure that doesn’t even include money that will be owed to their 2021 NFL Draft picks and funds needed to re-sign certain players. While some have speculated that Seattle could swap Wilson for Dak Prescott, also acquiring multiple first-round picks, this team can’t afford to pay another top quarterback.

Additionally, per NFL reporter Jeremy Fowler, Seattle has nothing in the works and even Wilson doesn’t expect the team to trade him this offseason. Instead, the star quarterback might want to see how Seattle handles the public pressure he created with moves to help improve this team’s chances of competing for Super Bowl LVI.

Wilson’s issues with the Seahawks are known. He’s not happy about the number of hits and sacks he has suffered in recent years, doesn’t like head coach Pete Carroll’s overcommitment to the run and is frustrated by the level of power Carroll has in the organization. After staying quiet for years, Seattle isn’t pleased that its star is now taking these matters public.

Carroll just signed a contract extension and is tied at the hip to Schneider, so this battle over roster control and the offensive scheme will be won by the veteran coach. Wilson seems willing to making things work, if the front accommodates his desires to strengthen the offensive line and take a more pass-heavy approach, but the writing is on the wall.

Column: Why the Las Vegas Raiders should go all-in with a Russell Wilson trade

Wilson already has a list of teams he wants to play for in the future. Meanwhile, this isn’t the first offseason the Seahawks have explored moving their franchise passer.

It’s a safe bet that Wilson will be under center for the Seahawks in Week 1 of the 2021 NFL season. Once the year ends, though, a blockbuster trade might be inevitable.

Russell Wilson: 5 teams who are a perfect fit for Seattle Seahawks QB