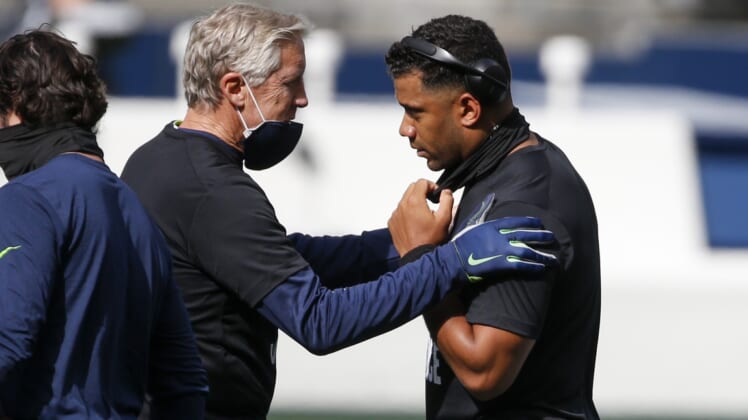 We already know the backstory. Russell Wilson trade rumors have been the name of the game in the Pacific Northwest since the Seattle Seahawks’ quarterback made it public record that he’s not happy with the organization.

At least initially, Wilson’s uneasiness had to do with a lack of protection from Seattle’s offensive line and and his inability to be involved in roster-building to an extent.

Things have since been on the decline between the Super Bowl-winning quarterback and his organization. The Seahawks are not happy Wilson took to the public with his grievances.

In turn, Wilson’s representatives have actually given Seattle’s brass a list of teams he’d be willing to waive his no-trade clause for. There’s a ton of smoke to this fire. That’s magnified even further following this report from veteran NFL Media insider Mike Silver.

“(The) Seahawks are not happy with the way this has gone down since the end of the season,” Silver noted. He also opined that it would be “malpractice” if the Seahawks were not engaging in Russell Wilson trade conversations.

Things really do seem to be boiling over in Seattle right now. It’s also pretty hard to fathom considering Wilson turned this dormant franchise into a legitimate Super Bowl contender the minute he became a Day 1 starter as a rookie back in 2012. Prior to Wilson’s arrival in Seattle, the organization had earned seven playoff appearances in 23 seasons. He’s led them to the playoffs eight times in nine years.

The broader issue here seems to be head coach Pete Carroll’s unchecked control of the organization following the passing of owner Paul Allen 2018. He’s pretty much running things as CEO of the organization. Wilson is not happy with it.

Does this mean a Russell Wilson trade will happen this offseason? Initially, it seemed to be beyond ridiculous to believe that the Seahawks would pull the trigger. That’s obviously no longer the case.

As we’ve seen with the Deshaun Watson saga in Houston, things can spiral completely out of control between a star quarterback and his organization. It is coming dangerously close to reaching that point in the Pacific Northwest.

Russell Wilson has every right to be upset

Wilson did sign a four-year, $140 million extension with the Seattle Seahawks back in April of 2019. To be fair to the organization, Seattle went against its modus operandi by signing Wilson to an extension before he entered the final year of his current contract.

It’s something general manager John Schneider pushed back against when it came to other star players, Legion of Boom core members Richard Sherman and Earl Thomas included. That expedited their ugly departures from Seattle.

With that said, Wilson’s initial unhappiness had to do with him being hit so much. Looking at the tape and the players Seattle has thrown out in front of Wilson along its offensive line, and that’s a legitimate concern. The stats back this up, too.

Since he entered the league back in 2012, Wilson has been hit more than any other quarterback in the NFL. He’s also been sacked a league-high 394 times during that span. Over the past three seasons alone, Russell Wilson has been sacked an ungodly 146 times. At 32 years old, this is not a way for the future first ballot Hall of Famer to prolong his career.

Mike Silver talked about malpractice in the quote we linked above. That would also be the best way to describe Seattle’s handling of its offensive line in front of Wilson — putting the quarterback in continued danger of serious injury.

The Seahawks have not selected an offensive lineman in the first round since they picked up the bust that is Germain Ifedi all the way back in 2016. Prior to that, it was another first-round bust in James Carpenter back in 2011.

This past season alone, a washed Mike Iupati joined the likes of Ethan Pocic, Damien Lewis and Brandon Shell in starting a combined 51 games. Way to protect your generational quarterback.

Will a Russell Wilson trade happen during the NFL offseason?

Opposing teams now believe that it’s inevitable Wilson will be dealt within the next year. Given how quickly things have spiraled out of control between the two sides, it’s now feasible to believe it could happen ahead of next month’s NFL Draft.

Wilson’s agent over at Frontline Athlete Management, Mark Rodgers, has given the Seahawks four teams his client would waive his no-trade clause for. That list includes the Dallas Cowboys, Chicago Bears, New Orleans Saints and Las Vegas Raiders. It’s also safe to say Wilson will expand said list should things continue to deteriorate in the Pacific Northwest.

The baseline asking price in any Russell Wilson trade is said to be three first-round picks. At the very least, this is an indication that the Seahawks have had internal discussions surrounding a potential trade. Pete Carroll has taken note. His ego has been impacted. That means everything could be on the table right now.

If Wilson is indeed traded, it would be a sad end to one of the most-successful marriages we’ve seen in some time west of New England. It would also dramatically alter the landscape of the NFL moving forward, much like what we saw with Tom Brady when he traded in his Patriots fatigues for the Tampa Bay Buccaneers.