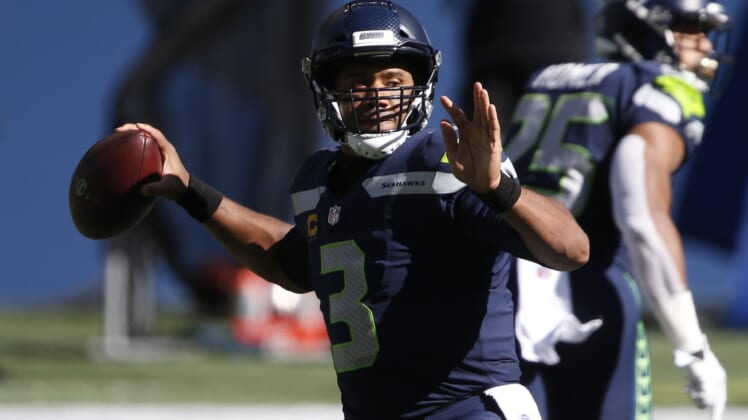 The Seattle Seahawks ideally wouldn’t trade quarterback Russell Wilson, but the eight-time Pro Bowler has made it clear he’s unhappy with the team and has even submitted a list of preferred trade destinations.

Now, it appears the Seahawks are accepting that their relationship with Wilson may be irreparable based on the latest rumors.

When the Seahawks were at their height during Wilson’s tenure, it was while he was on a rookie contract. They were able to build a strong defense and running game around him.

It’s not totally fair to say rewarding Wilson with a well-earned initial contract extension in 2015 — and another one in 2019 — has sunk the team ever since, however.

As Pro Football Focus’ Mike Renner observed, Seattle has had some seriously dubious draft classes over the past several years, which has led to the defense declining and the offensive line around Wilson being lackluster.

Seahawks general manager John Schneider has also been rather cavalier with first-round picks. He gave up two to acquire star safety Jamal Adams, and hasn’t been shy about spending those assets to land proven veterans.

Through all that, Wilson has posted nine straight winning seasons to begin his career. It’s apparent he feels somewhat underappreciated by his current team.

Maybe it’s time for Seattle to go back to the drawing board, trade Wilson, and net a huge haul of draft picks as a means of rebooting the program under head coach Pete Carroll.

As mentioned in the introduction, Wilson has named only four teams he’d be willing to waive the no-trade clause in his contract for: Las Vegas, Chicago, New Orleans and Dallas.

According to the latest listings from OddsChecker.com, the Bears and Raiders are co-favorites with +500 odds to be Wilson’s 2021 team of choice, followed by the Saints and Cowboys each at +700.

Oddsmakers notably still have the Seahawks listed at -750, but in light of Russini’s latest report and all the other negative buzz surrounding Wilson and his attitude toward Seattle, that line could crash considerably in the coming days.

To briefly break down Wilson’s reported trade preferences, let’s start with New Orleans, who has the worst salary cap situation in the NFL, but would have plenty of veterans to offer in a hypothetical deal.

Would Seattle have enough cap room to take any of them on, and could the Saints afford to also part ways with high draft picks given their extremely high payroll? The answers to both those queries are “probably not.”

How ’bout them Cowboys? Owner Jerry Jones would love nothing more than to avert these dragged-out Dak Prescott contract negotiations and upgrading with Wilson at the most important position. Prescott could either work out a long-term contract, or get franchise tagged and traded to the Seahawks.

That would mean Seattle likes Prescott enough to commit to him for the next decade. He’s shown a willingness in the past to submit to a run-first offense led by Ezekiel Elliott, which is how Carroll wants the offense to be under his watch. Meanwhile, Jones would roll the red carpet out for Wilson in Dallas.

Having said all that about the Cowboys, Las Vegas and Chicago are the odds-on favorites. The Raiders already have Derek Carr, though, and badly need to build out their woeful defense to stay competitive. Sacrificing their future to land Wilson doesn’t make a ton of sense.

It’s very possible the Bears pull off the Wilson blockbuster trade, given that they desperately need a QB and could still keep enough pieces of their roster intact to get him.

Look for either Dallas or Chicago to ultimately pull the trigger on acquiring Wilson, barring some unforeseen suitor jumping into the mix.