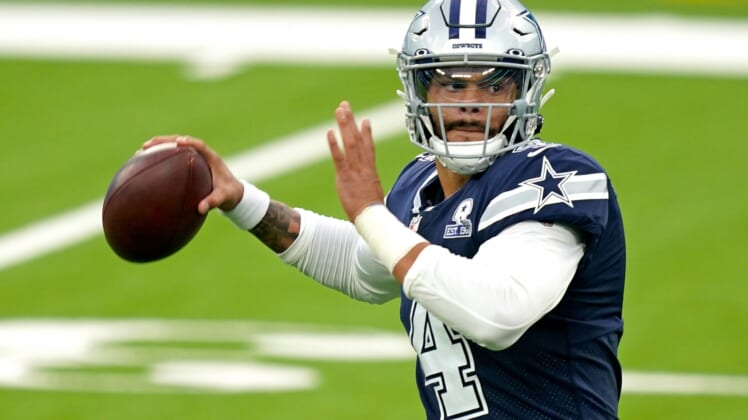 Dak Prescott contract talks have been the single biggest story surrounding the Dallas Cowboys over the past 18 months or so. Prescott was not happy to be handed the dreaded NFL franchise tag a season ago before going down with a serious ankle injury five games in.

That seemed to complicate things further between Prescott and the Cowboys, especially after owner Jerry Jones questioned the quarterback’s play style immediately after said injury.

Up until now, nothing had really changed since Dallas finished up a disappointing 6-10 season. With one week to go before the Cowboys face a deadline to place the franchise tag on Prescott, we could be nearing a culmination to this long, drawn-out drama.

“With the deadline for the Cowboys to place the franchise tag on quarterback Dak Prescott a week away, multiple sources said Tuesday night talks for a new contract are progressing.” Calvin Watkins of The Dallas Morning News noted. “One source characterized discussions as, ‘more productive than they have been,’ in previous months.”

This seems to be the most encouraging news on the Dak Prescott contract talk front in some time. If Dallas were unable to come to terms on a long-term agreement with its star quarterback, the team would then have to likely bite the proverbial bullet and pay him $37.7 million in 2021 under the above-mentioned tag.

The Cowboys had previously been hopeful that they might be able to get something done with Prescott ahead of March 9. We now have a concrete report pointing in the right direction. That’s no small thing.

How would a Dak Prescott contract extension look?

Suggestions last year were that Prescott wanted a short-term four-year deal so that he could enter free agency while still in the prime of his career. Dallas countered with a five-year offer, something that the quarterback’s camp scoffed at.

There’s no telling whether things have changed now that Prescott is recovering from a devastating ankle injury. He was recently seen without crutches at both a football function and the wedding of teammate Blake Jarwin after undergoing a clean-up surgery back in December. That’s good news.

After Prescott suffered the above-mentioned injury back in October, it was noted that the Cowboys’ previous offer was still on the table. It’s possible that they have now decided to cave and offer up a four-year extension.

Either way, Prescott is looking at something in the neighborhood of $40 million annually. This past offseason saw Patrick Mahomes set the record with a 10-year contract averaging out to $45 million per season. Deshaun Watson is earning $39 million annually on his deal with the Houston Texans. Something in between those two figures make sense.

This is one of the primary reasons Dallas wants to get a Dak Prescott contract extension done long before the deadline in July. The Cowboys are currently an estimated $16.29 million under the cap. That doesn’t take into account his $37.7 million franchise tag figure.

Given the complexities of the NFL salary cap during the COVID-19 pandemic, a longer-term deal would benefit both sides. For Dallas, that includes pushing back huge cap hits to later in the contract as a way to take into account the revenue increase the NFL’s new television contract would bring in. In short, a lot more flexibility during the 2021 offseason.

In an attempt to stay relevant on the broader NFL stage over the past few years, Jerry Jones and Co. have made it their MO to restructure the contracts of big-name players.

This has left Dallas vulnerable as it relates to flexibility under the salary cap. The team’s only way out right now might be to cave in and give Prescott what he wants on a long-term deal before the start of NFL free agency.

That could be one of the reasons Dak Prescott contract talks are progressing at this late stage.

Click below for more Dallas Cowboys news and rumors.