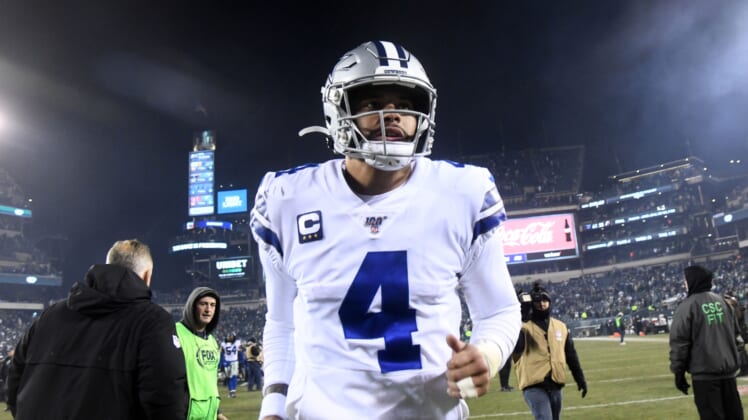 The Dallas Cowboys are in a predicament. Either they sign Dak Prescott to a contract extension this offseason or their star quarterback will walk out the door in free agency in 2022. In a contract saga that has lasted for two years, it seems the Cowboys are very aware of what’s at stake this offseason.

Dallas found itself in a similar situation last offseason. Knowing it couldn’t allow Prescott to hit the open market, both sides discussed a contract extension. But the parties never came close to a deal, resulting in Prescott receiving the $31 million franchise tag. When the deadline to sign an extension passed in July, the Cowboys kicked the proverbial can down the road at the most important position in the NFL.

Things have only gotten worse for the organization since. NFL teams are facing an unprecedented cap crunch, Prescott has all the leverage and Dallas is running out of time before it has no other choice but to let the franchise star walk out the door.

Here is the latest on Prescott’s contract negotiations with the Cowboys.

According to NFL Network’s Ian Rapoport, the Cowboys are very confident Prescott will fully recover from his gruesome leg injury and the organization wants to get a contract extension done now. But if that’s going to happen, a long-term deal will likely make him the second-highest paid quarterback in the NFL by approaching $40 million per season.

Dallas doesn’t have much of a choice this spring. Placing the franchise tag on Prescott for the second consecutive year will be costly. The move is ultimately expected, but it means giving him a one-year deal worth $37.7 million fully guaranteed. Once that happens, the two sides will only have a few months until the deadline to sign a tagged player to an extension passes.

Leverage is the key element at play this offseason. Prescott doesn’t want to play another year on the franchise tag, especially after what he experienced this past season. But even if he is stuck with Dallas for another year with the exclusive franchise tender, he holds all the leverage.

Both Jerry Jones and Troy Aikman, who called out the organization, acknowledge that Prescott gets to determine his price this offseason. Last spring, he wanted a four-year contract worth just over $35 million annually. Dallas refused to meet that number, insisting on a five-year deal to have more team control.

The Cowboys have to regret passing on that. At a minimum, Prescott can set the bar at $38 million annually under his new deal. The figure could get even higher with Aaron Rodgers, Josh Allen and Lamar Jackson each exploring contract extensions or raises with their respective teams this offseason. So, the Cowboys’ quarterback and the star of the most valuable sports franchise can set his mark wherever he wishes.

Unfortunately for Dallas, negotiations between the two sides aren’t going well. The Cowboys have until March 9 to apply the exclusive franchise tag, which is when that decision will likely be announced. After that happens, there will only be three months remaining for the two sides to negotiate a new contract before history repeats itself.

While the Cowboys could place the franchise tag on Prescott next offseason, it would require a 144% increase on his $37.7. million salary. That’s a scenario no NFL team could afford, likely resulting in him leaving via free agency.