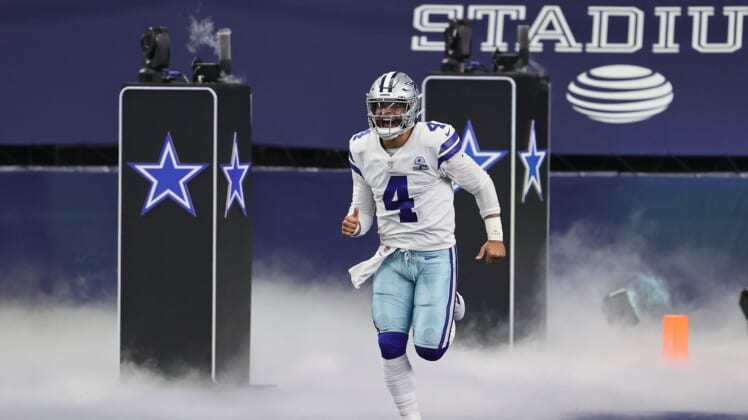 Dallas Cowboys rumors this coming NFL offseason will focus heavily on the contract situation relating to impending free agent Dak Prescott. Despite suffering a devastating ankle injury back in Week 5, Prescott is slated to cash in big time.

Dallas noted after Prescott’s injury that it would not push back against placing the franchise tag on the Pro Bowl quarterback for a second consecutive year. That would come at roughly $37 million, the average of the five highest-paid quarterbacks in the NFL. This would not be an ideal scenario for a Cowboys team that’s currently $18.6 Million under the projected $175 million 2021 cap figure.

Coming off a disastrous 6-10 season, Cowboys owner Jerry Jones opened up about Dak Prescott contract talks. He did not hold back.

Related: Ranking NFL QB’s who could change teams in offseason

“I don’t know how you could have any more leverage,” Jones said on 105.3 The Fan (h/t ESPN). “His evolving into an NFL quarterback has been nothing short of a perfect picture. He has great ability, in my mind, to win games. He’s talented. He certainly has the experiences and he has all the things, which has been substantiated by what we’ve offered Dak. You wouldn’t offer Dak what we offered in the past if you’d not thought he was very special.”

The Cowboys’ six-win season under first-year head coach Mike McCarthy adds a whole new layer to this. NFL rumors spoke to a huge stalemate between Prescott and his Cowboys prior to him being franchise tagged ahead of the 2020 season. At this point, it’s hard to fathom that rift existing. That’s especially true if Dallas’ brass is already admitting that Prescott has all the leverage here.

Prescott, 27, has been tremendous since taking over as the Cowboys’ starter as a rookie mid-round pick back in 2016. Over the course of his past 21 regular-season starts, the Mississippi State product has tallied over 7,000 total yards with 45 touchdowns and 15 interceptions. Those are some historically good numbers.

This has been the age-old question in Big D. The Cowboys wanted Prescott to take a five-year contract that likely would have averaged out to $40 million or so annually. Instead, the quarterback was set to bet on himself on a shorter four-year deal.

Given Prescott’s recent injury, he might be inclined to take the Cowboys up on their previous offer. Whether it still stands remains to be seen.

What we do know is that Prescott will ultimately join Patrick Mahomes as the only $40 million per-year quarterback in the NFL. That could happen as soon as the 2021 offseason.

Related: NFL stars who could be traded

As for Cowboys rumors relating to the quarterback position, they would like to retain fellow impending free agent Andy Dalton. Of course, that would be as Prescott’s backup should he be retained.

Obviously, there’s also the unlikely scenario that Dallas opts to franchise Prescott with the sole purpose of trading him for draft-pick compensation. One specific team comes to mind in that regard.

If this were to happen, the Cowboys would then be forced to go with Andy Dalton next season or find a capable veteran starter either through free agency or the trade block. Potentially available names that would interest Dallas under this hypothetical include Philip Rivers, Matt Ryan and Matthew Stafford.

However, that seems like a highly unlikely scenario based on Jones’ comments about his current star quarterback.