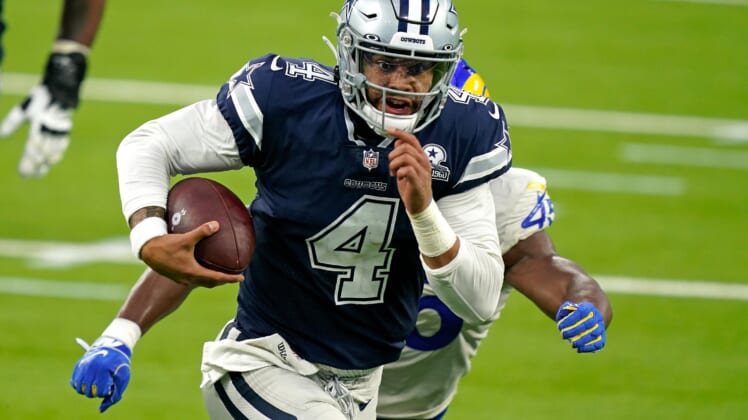 Dallas Cowboys quarterback Dak Prescott is poised to cash in with a massive contract once again this offseason. With one star passer already traded and another wanting out, however, there remains some speculation around which team will sign Prescott.

The Cowboys nearly reached a contract extension with Prescott last offseason, but fell short at the deadline and drew intense criticism. With their franchise quarterback still recovering from a gruesome ankle fracture, the team’s hopes for a long-term deal are even more complicated in 2021.

Sports Illustrated’s Albert Breer wrote Monday that Prescott will likely receive the franchise tag from the Dallas Cowboys for the second consecutive year.

It would be a costly decision for Dallas. After playing on the $31.4 million exclusive tag this past season, the Cowboys would be required to pay Prescott even more money this coming season. If he is hit with the tag again, the two-time Pro Bowl selection would be owed $37.7 million this year.

It might be the team’s last resort, given the potential issues caused by the deal. Dallas is in a tight spot against the 2021 NFL salary cap and Prescott’s figure would make addressing this defense even more difficult. There would also be issues beyond next season.

The Cowboys would risk Prescott walking in 2022, simply because the team couldn’t afford an unprecedented third franchise tag. In that scenario, with the star quarterback on the open market, other NFL teams likely push the asking price past a point where Jerry Jones would feel comfortable matching.

Jones has made it clear the franchise is committed to Prescott. While there have been some eye-opening comments during the quarterback’s recovery, Jones’ love and appreciation for the face of America’s Team hasn’t changed.

Prescott will absolutely have the power to dictate his asking price when negotiating with Dallas. The organization knows what will happen if he plays out the year on the franchise tag, making a contract extension necessary for this partnership to last.

Before suffering the season-ending injury, Prescott played at an absurd level with a 99.6 quarterback rating, 1,856 passing yards and 12 total touchdowns in five games. He can easily argue to receive $38-plus million annually, even higher if Buffalo Bills quarterback Josh Allen signs first.

If Prescott and the Cowboys can’t agree on an extension after hitting him with the franchise tag, another blockbuster quarterback trade might be the final option.