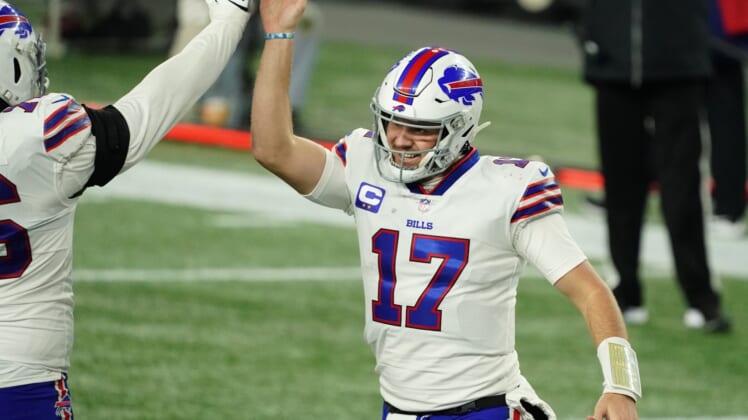 As the Buffalo Bills prepare for their first home playoff game in 24 years, the team is already thinking about its future with Josh Allen. With the quarterback putting the finishing touches on a breakout season, Buffalo is making plans to reward him and ensure he is with the club for years to come.

Allen, who earned Second Team All-Pro honors, is coming off a phenomenal regular season. Entering the NFL Playoffs, the 24-year-old quarterback has already thrown for over 4,500 yards and accounted for 46 total touchdowns this season. With the former No. 7 overall pick playing like an NFL MVP candidate, it seems the Bills are ready to offer him a contract that reflects his production and abilities.

The Bills don’t need to rush into contract talks with Josh Allen. Like with Baltimore Ravens quarterback Lamar Jackson, the fifth-year option means Buffalo can exercise its fifth-year option on Allen and have him under contract for the 2021 and 2022 NFL seasons.

However, teams recognize the importance of ensuring that a franchise quarterback never hits the open market. So, whenever Buffalo’s season ends, the front office is reportedly prepared to make a splash this offseason.

The Bills will likely take the same approach we saw from the Kansas City Chiefs and Houston Texans. Both teams picked up the fifth-year options on their franchise quarterbacks immediately, then launched into discussions on a long-term extension.

Buffalo should feel a lot more comfortable about signing Allen to an extension, too. After all, it wasn’t a foregone conclusion that he would become one of the NFL’s highest-paid quarterbacks a year ago.

While the Bills made the playoffs in 2019, Allen completed just 58.8% of his passes, posted an 85.3 quarterback rating and he performed horribly in his postseason debut. But the young quarterback devoted his offseason to becoming a better quarterback and the blockbuster acquisition of Stefon Diggs helped even more.

Related: Why it’s time for the Buffalo Bills to pay Josh Allen

Coming off a regular season that will likely see Allen finish third for NFL MVP honors, he has proven himself worthy of a lucrative contract extension. With an elite quarterback leading this team into the future, it would also be a wise move for the Buffalo Bills to pay Josh Allen like the player he has become.

Josh Allen contract: What will it cost Buffalo Bills to sign their All-Pro quarterback?

As Rapoport notes, discussing contract extensions this offseason will be a bit more complicated for NFL teams. Due to the COVID-19 pandemic, the league suffered a massive revenue hit. As a result of an offseason agreement with the NFL Players Association, there will be fallout on the 2021 NFL salary cap.

The cap ceiling in 2021 can’t dip past $175 million, preventing a catastrophic scenario where teams would be in awful financial situations. However, the salary cap is expected to dip from its $198.2 million figure this season. So, there will be cap casualties in the offseason as marquee players are cut so teams can save money.

With all that said, there’s plenty of more revenue on the horizon. The NFL is closing in on new television contracts, which are estimated to exceed $100-plus billion. A greater influx of cash on the horizon means player salaries shouldn’t plummet and that leads to a payday for Josh Allen.

The Buffalo Bills aren’t going to offer him the staggering 10-year, $500 million extension that Patrick Mahomes signed with Kansas City. However, Allen’s representatives could see Mahomes’ $45 million average annual value as a target to open negotiations.

It’s a figure Buffalo won’t likely agree to match. However, Deshaun Watson’s $160 million extension could be a middle ground. Watson’s $39 million average salary makes him the second-highest paid player in the NFL, a figure that the Bills might be willing to beat.

While it’s a high price to pay, that’s the cost of doing business in the NFL. If it comes down to paying Josh Allen or spending years searching for the next franchise quarterback, the Buffalo Bills won’t hesitate to sign off on a contract extension.