Buffalo Bills rumors: Why the team should extend Josh Allen this offseason 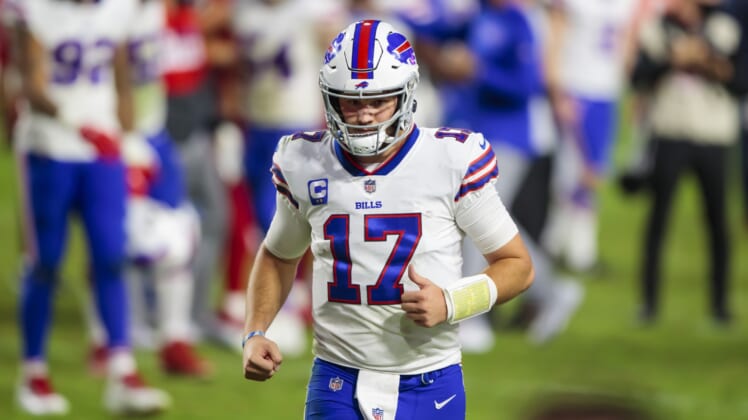 Buffalo Bills rumors: What we’ve seen from quarterback Josh Allen thus far in his third NFL season has been nothing short of extraordinary. The former top-seven overall pick has morphed into a truly elite signal caller. Following Week 14’s win over the previously one-loss Pittsburgh Steelers, Allen also has Buffalo at 10-3 on the season. This will soon lead to speculation that Buffalo must lock Allen up long-term.

Buffalo Bills rumors: Why the team should sign Josh Allen to contract extension

Buffalo’s 26-15 win over Pittsburgh on Sunday evening underscores this belief. For the first time since the Jim Kelly era, these Bills can be seen as legitimate Super Bowl contenders. Josh Allen himself is the franchise’s best quarterback since the above-mentioned Kelly. It’s not necessarily that close.

Allen headed into Sunday’s game having accounted for 3,725 total yards with 32 total touchdowns and eight interceptions. He had the Bills averaging a resounding 27.8 points per game. Despite an uneven performance, Allen also led the Bills to their 10th win of the season against Pittsburgh. It’s the team’s best 13-game start since all the way back in 1991. Let that sink in for a second.

We know football is a team game. We also know that quarterbacks receive the credit when teams are performing well and are on the receiving end of criticism when struggles are the name of the game. As for Allen and his Bills, he compares favorably to some of the other top signal callers in the game (stats as of Week 13).

It’s rather simple. As we have seen throughout the past several years, the quarterback market continues to reset itself on a never-ending loop. The longer teams wait to extend franchise signal callers (see the Cowboys), the higher said extension ends up being worth.

Given what we’ve seen from Allen since the start of his sophomore campaign back in 2019, there’s absolutely no reason why the Bills should wait on extending him. He’s eligible for that first veteran contract come the offseason. Delaying the inevitable makes no sense.

Now, what would a Josh Allen extension look like? It’s highly unlikely that Allen would take a 10-year deal like we saw with Mahomes in Kansas City. He’s also not going to earn the $45 million annually that the Chiefs’ quarterback is making.

Rather, a contract similar to the four-year, $156 million deal Deshaun Watson signed with the Houston Texans back in early September makes the most sense. Welcome to the new NFL.

Either way, the expectation is that recently-extended Bills general manager Brandon Beane will make something work with Allen. How that might look is anyone’s best guess. What we do know is that the elite signal caller will get paid here soon.