How To Watch The Ohio State Buckeyes Live Games in 2022 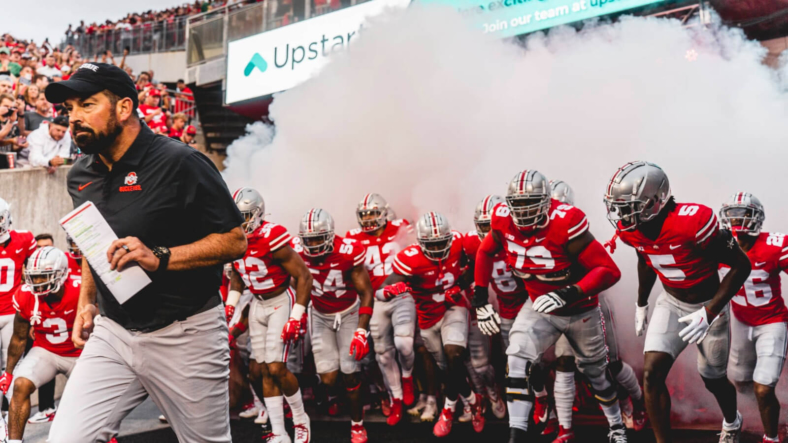 Ohio State’s football program is the second-most winning football program of all time, and its impressive track record makes them a must-watch team for football fans. However, national championships have often eluded the team and going into the coming season, Ohio State players are hungry for a big win. This brings the promise of competitive, high-action matches that are sure to entertain fans and spectators alike. Keep reading to find out how you can watch the Ohio State Buckeyes on a live tv streaming service this season.

Get 50% Off Your First Month With Sling

Where can you stream almost all of the Ohio State Buckeyes games?

Ohio State football games will be aired on ABC, the Big Ten Network, and Fox. Accessing these channels via a streaming service is a cheaper alternative to cable, and it’s also a more flexible option, as you can test out most streaming services with a free-trial and cancel at any time.

Sling TV is one of the most affordable TV streaming services with the option of three packages — Orange, Blue, and Orange & Blue — priced between $35 and $50. For this price, subscribers get access to a slimmed-down channel list tailored toward entertainment, sports, or both. For sports fans, either the Orange or Orange & Blue package will be the most appealing, as each provides extensive sports channels, along with some news and entertainment networks.

Ohio State fans should be aware that no Sling TV packages give access to the ABC network, but these ABC games will most likely be streamed on ESPN3 which is included in Sling Orange and Sling Orange and Blue packages. Fox channels are only available in some markets, and access to the Big Ten Network is available through the Sports Extra add-on for 12 extra sports channels. With the additional cost of the Sports Extra add-on, Sling TV is still significantly cheaper than some competitors making it a cost-effective option for fans looking to watch Ohio State Buckeyes games.

DIRECTV STREAM offers four packages ranging from $69.99 to $149.99 with a free trial available at each price point. Each package also offers a large range of channels covering news, sports, and entertainment content. Ohio State fans specifically will be best served by the Choice, Ultimate, and Premier packages, as these include the Big Ten Network, ABC, and Fox. The cheaper Entertainment package only provides access to the latter two stations, meaning fans will not be able to watch all Ohio State games.

For sports fans in general, DIRECTV STREAM is known for having some of the best regional sports coverage with access to many local channels. While it’s one of the more expensive streaming services, especially at the top end, the Premium package includes elite channels like HBO Max, Showtime, and Cinemax. This makes it a worthwhile investment not only for local sports devotees but also for fans of premium movies and series who want to make sure they always have something to watch.

The Hulu + Live TV package gives access to more than 75 live TV channels, including major networks, and the Hulu library of on-demand content. While the primary package is available for $69.99 per month, an ad-free version is also available for $75.99. Both packages include access to ABC, Fox, and the Big Ten Network, meaning Ohio State fans can watch all games currently scheduled for broadcast. Neither package has the option of a free trial.

The Hulu + Live TV packages also include major sports channels airing NFL games like ESPN and the NFL Network. However, the real selling point of Hulu + Live TV is the access it offers to premium content, such as Disney Plus, ESPN Plus, and original shows and movies in the Hulu content library. This makes Hulu + Live TV a service well suited to individuals and families who want to watch Ohio State games and other sports along with a range of curated channels and high-quality entertainment content.

FuboTV offers three streaming plans — Pro, Elite, and Ultimate — ranging in price from $69.99 to $99.99 per month. For this, you get access to 124+ channels, respectively, depending on how much you pay, all with a range of major networks showing sports, news, entertainment, and kids’ content. The fourth FuboTV plan is the Latino package with 43+ Spanish-language channels for $33 per month. A free trial is available for each package.

FuboTV is ideal for sports fans, as it offers access to more sports channels than any other TV streaming service. Ohio State fans specifically will have access to games on ABC, Fox, and the Big Ten Network with all FuboTV plans, except the Latino plan. Overall, FuboTV offers a large selection of channels at each price point making it a service well-suited to families or households filled with sports fans who also want a variety of content to watch.

Click Here to Watch the Ohio State Buckeys on FuboTV

In September, the following Ohio State football games are scheduled:

Note: All times are ET.

You can find the full season schedule on ESPN.com.

Where can I stream the Ohio State football game?

Can I watch the Ohio State game on Amazon Prime?

Does Hulu have Ohio State football?