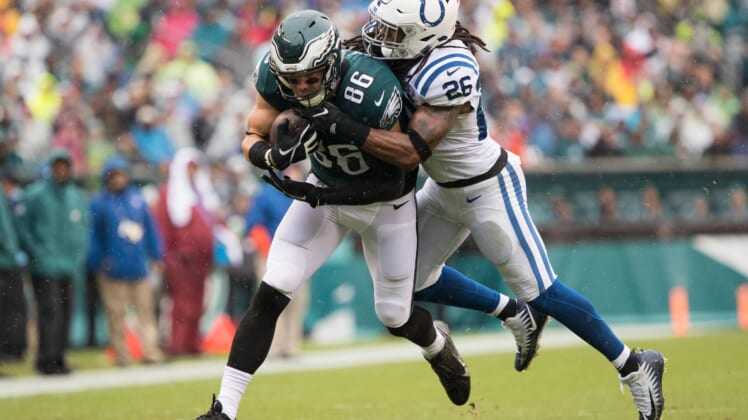 The Philadelphia Eagles are expected to part ways with Pro Bowl tight end Zach Ertz this offseason, which creates the fascinating topic of the teams that present the best fit for the dynamic pass-catcher in 2021.

Ertz presumably would want to go to a stable organization with a winning tradition, but even those qualifiers aren’t a guarantee. Look no further than how far the Eagles have fallen since winning the Super Bowl only a few seasons ago or so.

Without further ado, let’s take a look at some great destinations where Ertz could get a fresh start and be put in ideal position to revitalize his NFL career.

Colts head coach Frank Reich knows how to use Ertz. Indianapolis tight ends Mo Alie-Cox and Trey Burton are free agents. You’d be hard-pressed to argue Ertz wouldn’t be an upgrade in Reich’s system over either of those players, or incumbent prospective starter Jack Doyle.

Ertz’s ties to Reich and the fact that the Colts have a massive amount of cap space to pay him makes this a match made in heaven. Indianapolis is the antithesis of Philly’s chaotic organizational situation. General manager Chris Ballard has patiently put together a strong roster loaded with young talent — hence all the cap room. Reich is proving to be a magnificent head coaching hire heading into his fourth season at the helm.

The only thing that might scare Ertz off from Indy as a suitor is the unresolved quarterback situation. Philip Rivers retired, but he was only a stopgap option in the first place, so that wasn’t the biggest shock. Nevertheless, it’s a legitimate issue the Colts must address.

It’s very possible Ertz’s quarterback from Philadelphia, Carson Wentz, could wind up in a Colts uniform next season, which may help ultimately recruit him there. But no matter who’s under center, Ertz has to believe Ballard and Co. have a plan as Indianapolis gears up to potentially take over the AFC South in the coming years.

If Ertz is really disenchanted with the way things are coming to a conclusion in Philadelphia, maybe he’d want to stick it to the Eagles by playing for a division rival like Washington.

The Football Team needs a reliable pass-catcher anywhere in their supporting cast. Logan Thomas is a rising stud at the tight end spot, but Ertz is a great mentor for the younger player — and an immediate go-to target for the quarterback.

Again, the lack of a clear QB solution here is a possible deterrent, as is Washington’s traditionally dysfunctional leadership. Coming off an NFC East title under new coach Ron Rivera, though, it seems like the Football Team may finally be righting the ship with Rivera leading the charge.

Whether it’s Taylor Heinicke, a trade for Marcus Mariota or a deal to move up for a QB in the 2021 NFL Draft, Washington should have a better answer at quarterback than the Eagles will in 2021. It’s a matter of whether Ertz values the money and opportunity for a heavy target share over the possible awkwardness of staying in the NFC East and the chance that the Football Team’s playoff berth was a mirage.

Neither of the draft picks head coach Bill Belichick spend on the tight end spot in 2020 wound up contributing much as rookies. For all of Belichick’s tactical coaching brilliance and ability to keep the Patriots the most consistent winners for the better part of two decades, it does appear he leaned a lot on Tom Brady, considering the New England signal-caller left Foxborough for Tampa Bay and won Super Bowl LV with the Buccaneers.

Meanwhile, the Pats fell to 7-9 this past season and missed the playoffs. A big reason for that was their largely lackluster receiving corps — Damiere Byrd and N’Keal Harry ranked 102nd and 115th respectively out of 127 Pro Football Focus qualifiers — and lack of capable pass-catchers at tight end.

It’s not like Rob Gronkowski was walking through that door at Patriots headquarters. Gronk joined Brady in Tampa for another Lombardi Trophy.

Ertz cost Belichick another championship several years ago when he shined for Philadelphia in Super Bowl LII with seven catches, 67 yards and a touchdown in the Eagles’ 41-33 triumph. Now, the Hoodie might be able to pick up the 30-year-old veteran on the open market or through a trade.

The type of attention Ertz attracts can create openings for any receivers the Patriots trot out in 2021. What’s great, too, is Ertz would be going to the most stable of football operations in New England, which should experience a big bounce-back in some form or fashion in short order. You can bet Belichick will spend big to fix the quarterback spot, upgrade the offense and get back into AFC playoff contention.

Few teams need a tight end as badly as the Jaguars do. They could take someone like Penn State’s Pat Freiermuth in the second round of the draft. Or, with the most cap room in the NFL, they could spend a decent penny on an established star like Ertz.

The absence of a state income tax in Florida is a good selling point for Ertz to join the fold in Jacksonville. Oh, and did we mention that Trevor Lawrence will soon be the quarterback? He may be the best draft prospect in NFL history.

Also, there’s the new hire of Urban Meyer as head coach. Meyer is a master motivator and program builder, and in an AFC South division that feels really wide-open, if the right veterans are added to the mix to flank Lawrence, the Jaguars could shock the football world in 2021 with a playoff appearance.

Much work to be done between now and then to accomplish that objective. Ertz may see the merit to that vision, though, especially with someone of Meyer’s recruiting caliber trying to convince him to come be a part of something special in Duval County.

Could Ertz be hauling in touchdowns from Lawrence next season, and helping usher in a new era of Jaguars football? It doesn’t sound terribly far-fetched, especially if Jacksonville hits on its other high draft picks.

Sam Darnold could earn the trust of the Jets’ new coaching staff, but more likely, New York will use the No. 2 overall pick to draft either Zach Wilson or Justin Fields, or cash in on that premium asset in a massive Deshaun Watson trade.

Again, the Jets aren’t exactly the paragon of NFL stability or winning traditions, yet they do have a new coach in Robert Saleh, a competent GM for the first time in years in Joe Douglas, and a boatload of cap space to spend.

Ertz is going to be a friendly target and security blanket for whichever young signal-caller is running the Jets offense in 2021. Saleh brought over Mike LaFleur as his offensive coordinator from the San Francisco 49ers staff, which actually would bode well for Ertz in terms of a personnel fit.

Due to LaFleur being versed in Kyle Shanahan’s system, and understanding how effective George Kittle has been in that offense, Ertz’s skill set would seem to translate well to that scheme. As long as New York assembles a solid rushing attack with its trove of monetary resources, it should be among Ertz’s top suitors should he be granted a release.