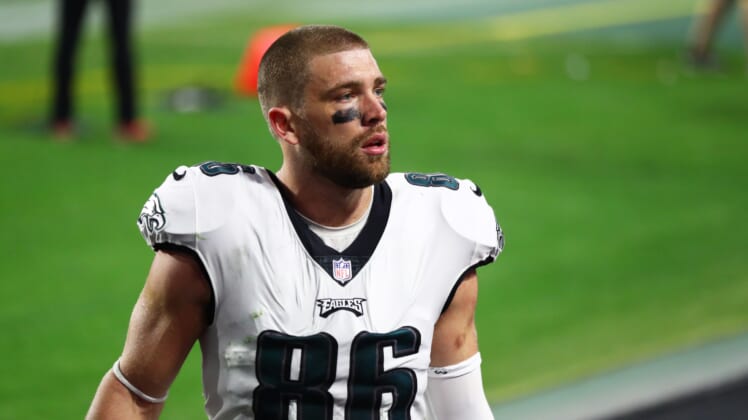 The Philadelphia Eagles are making significant changes to their offense this offseason and even more moves could be looming. With Doug Pederson out and Carson Wentz destined for a trade, Philadelphia is also prepared for a future without Pro Bowl tight end Zach Ertz.

Ertz, a second-round pick in the 2013 NFL Draft, has spent his entire career with the Philadelphia Eagles. Entering the final year of his contract, following a year of turbulent negotiations with the organization, the 30-year-old’s tenure in Philadelphia is reportedly over.

As the Eagles engage in trade discussions to send out their franchise quarterback, the team appears set to part ways with Ertz relatively soon.

According to ESPN’s Jeremy Fowler, several around the NFL expect the Eagles to part ways with Ertz this offseason. The sentiment is also reportedly shared by the Pro Bowl tight end, who anticipates a change of scenery via trade or an outright release.

While Ertz is beloved by the fans and remains a reliable weapon in the passing game, Philadelphia has little choice but to move on from him. The Eagles are $50 million over the projected 2021 NFL salary cap, a figure that doesn’t even include money that will be owed to their 2021 NFL Draft picks. Either releasing or trading their star tight end would create $8.25 million in cap space, financial flexibility the organization desperately needs.

The franchise exercised its option on Ertz in March 2020, hoping to launch into contract negotiations after that. Both sides tried negotiating during the summer, but talks didn’t go well. By the time the midway point of the regular season came around, Ertz was put on the trade block.

Ertz os coming off his worst season in the NFL, due to injuries and a reduced role in the offense. He only played in 11 games last year, hauling in 36 receptions for 335 receiving yards and one touchdown. Ertz’s 50% catch rate, 4.7 yards per target and 30.5 yards per game were all the lowest marks in his tenure with the Eagles.

Philadelphia already has its long-term plan to replace Ertz. Dallas Goedert, the 49th pick in the 2018 NFL Draft, stepped up as the team’s top tight end in 2020. At 6-foot-5 with strong hands and great athleticism, he offers Pro Bowl potential at the position. Entering the final year of his rookie contract, Philadelphia will likely want to sign him to an extension in the near future.

While Zach Ertz will no longer be with the Philadelphia Eagles in 2021, fans will remember the highlights and his willingness to play through extreme pain. Wherever he lands this offseason, he can make a big impact for another offense next season.