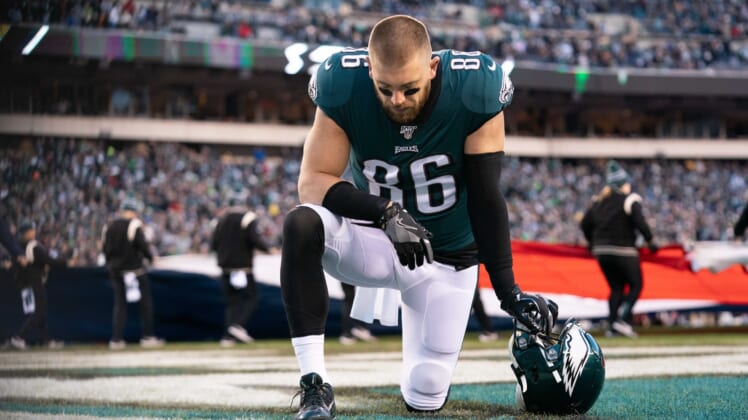 Philadelphia Eagles tight end Zach Ertz wants to spend his entire career with the only organization he’s ever known. With the NFL star nearing the end of his contract, both sides could finally be working towards another extension.

Ertz, a second-round pick in the 2013 NFL Draft, has been an incredible weapon in Philadelphia’s offense since making the jump to the NFL from Stanford. Set to enter his age-30 season, both the Eagles and Ertz seem ready to start negotiating.

After playing out three seasons of his rookie contract, the Eagles rewarded Ertz with a lucrative contract extension before the 2016 season. He signed the five-year, $42 million contract and took his game to the next level.

Ertz made the Pro Bowl for the first time in 2017, marking his first of three conseutive selections. The contract also worked out nicely for Philadelphia, with the team winning Super Bowl LII in 2018.

The Eagles exercised their $8 million team option on him in March, an easy decision for the organization. However, with just two years remaining on his deal, Ertz is ready for a raise and a new contract.

According to The Philadelphia Inquirer‘s Jeff McLane, the Eagles and Ertz’s agent have begun preliminary discussions about a new deal. While nothing is believed to be imminent, both sides believe he should be one of the highest-paid tight ends in the NFL.

Of course, the asking price has shifted in recent weeks. After years of tight ends being undervalued and underpaid, recent extensions for San Francisco 49ers tight end George Kittle and Kansas City Chiefs star Travis Kelce have changed the landscape for pay.

Fortunately, the Eagles recognize Ertz deserves a raise for his incredible contributions to the team. But, there are some factors that will complicate the contract extension.

There’s no denying the impact Ertz makes on the field and he is beloved in the locker room. For a team facing huge cap problems in the coming years, even more so with the 2021 salary cap expected to drop, figuring out the cost of Ertz’s new contract is challenging.

Ertz will turn 30 in November, reaching an age where production and efficiency can start to drop off. As a result, he’s unlikely to net the five-year, $75 million contract extension Kittle landed given Kittle is 26.

One thing that makes Ertz one of the most beloved athletes in Philadelphia is his ability to fight through pain. However, that also speaks to an injury history that makes a long-term contract risky.

He played through rib and kidney injuries late in the 2019 season. While he missed just one game last year and has appeared in 14-=plus games in each of his seven NFL seasons, the hits are taking a toll on Ertz.

Of course, he deserves more than the $8.25 million base salary he is owed in 2021. Ertz’s stats are impressive with 800-plus receiving yards in five consecutive seasons. He’s been even better in the past two years with 2,079 receiving yards in his last 31 games.

There’s no guarantee both sides agree to an extension. The emergence of tight end Dallas Goedert, whose contract expires after 2021, could leave the Eagles with a difficult choice between two talented players. In the end, they may choose the player who is younger, cheaper and on the rise.