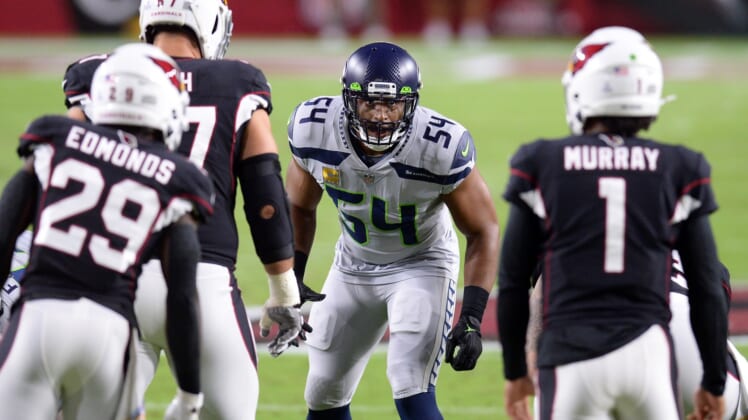 The NFL ratings have been one of the biggest stories of the 2020 season and on a night when Sunday Night Football competed with Game 5 of the World Series, the NFL came out on top over MLB.

An epic matchup between Seattle Seahawks and Arizona Cardinals, featuring two quarterbacks who chose NFL careers over MLB, delivered the first overtime game this season for SNF. Unsurprisingly, plenty of fans tuned in to watch Russell Wilson and Kyler Murray.

A week after Sunday Night Football had its smallest audience of the NFL season, NBC’s football broadcast came roaring back in Week 7. With the Cardinals and Seahawks’ help, a game that was rescheduled from Sunday afternoon due to a COVID-19 outbreak, Sunday night’s broadcast was a hit with viewers.

According to ShowBuzzDaily, 12.3 million people watched the Cardinals wild comeback victory over the Seahawks. The early numbers, which don’t include the total viewership from the West Coast, nearly surpassing the total audience from Week 6.

After competing against Game 7 of MLB’s NLCS last Sunday, the NFL went head-to-head with Game 5 of the World Series between the Los Angeles Dodgers and Tampa Bay Rays. A night after Tampa Bay’s epic win to tie the series 2-2, 7.4 million people watched the Dodgers reclaim the series lead.

Ever since sports returned amid the COVID-19 pandemic, ratings have been down for every league. After competing with the NBA Playoffs and Stanley Cup Finals and easily outdrawing both, the NFL is pulling in a far bigger audience than the pinnacle of the MLB season.

It hasn’t all been smooth sailing for the NFL and NBC this season. Despite some marquee games between beloved teams, featuring some of the league’s biggest stars, NFL ratings for Sunday Night Football weren’t reaching the heights we saw in 2019.

The decline in viewership was undeniable, with NBC feeling the same kind of ratings hit we’ve seen for FOX’s Thursday Night Football and ESPN’s Monday Night Football broadcasts. Despite the lost viewers, it seems all major networks are elated to be partnered with the NFL.

Of course, in a year where the NFL’s revenue is taking a hit and losing of millions of viewers is still costly for networks, the focus has been on a potential cause for the ratings dip.

While President Donald Trump has taken shots at the NFL and players who kneel during the national anthem in previous years, it has accelerated during the 2020 election. With more players vowing to peacefully protest and the NFL creating a larger platform for them, Trump went after the league.

Following the killings of George Floyd and Breonna Taylor by police officers, athletes called on NFL commissioner Roger Goodell to step up with action. Goodell publicly supported the Black Lives Matter movement and acknowledged he didn’t handle the players’ demonstration correctly in 2016. In regards to Colin Kaepernick, with athletes like LeBron James demanding an apology, Goodell admitted the NFL should have listened to Kaepernick’s message.

The league itself also took action. The NFL pledged $250 million to combat systemic racism and we saw league-wide protests in Week 1, which have continued ever since.

Trump took notice of it all, using it as a talking point on Twitter and along the campaign trail. He vowed to boycott the NFL this summer and continued to center his attacks on the NFL’s growing support of its players.

While the NFL has taken a softer stance on speaking out on police brutality and social justice in the past, that changed this season. The league planned to defy Trump, ignoring his wishes, with teams making significant efforts to side by players and create change.

The NFL faced a choice this summer, heading into a season when they knew stadium revenue would plummet due to the COVID-19 pandemic. Ultimately, the league chose to support its players’ voices. Given ratings for the Stanley Cup, World Series and NBA Finals have plummeted at far greater levels than the NFL; things seem to have worked out.

A World Series featuring the Tampa Bay Rays wasn’t the dream scenario for MLB. With the postseason being held in a bubble and minimal attendance allowed, the league was still hopeful it could draw solid numbers.

Instead, the 2020 World Series is drawing its lowest ratings ever. After averaging 9.2 million viewers for Game 1, viewership drop even lower for Game 2 (8.95 million).

On Friday night, when Game 3 went against ABC’s Shark Tank and CBS’s Big Brother, things didn’t get much better. Even NBC’s Saturday Night Live drew a higher household rating (5.0) than Game 4 of the World Series (4.7).

Things aren’t looking good for Major League Baseball. In a year where it anticipated losing billions of dollars, highlighted by the issues the Atlanta Braves revealed in August, MLB might be in even more dire straits than it anticipated. It will make for a slow and potentially ugly offseason for all involved, especially with a potential strike looming after the 2021 season.