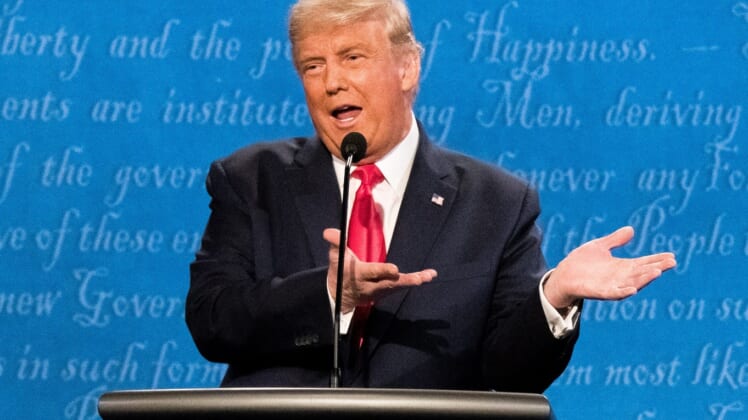 The NFL ratings have been one of the biggest stories of the 2020 season and on a night when the league competed against the final presidential debate, the ratings for Thursday Night Football plummeted.

Amid a turbulent season that has found the NFL entangled with President Donald Trump, ratings were expected to dive for FOX and NFL Network on Thursday night. Despite featuring an NFC East rivalry between the Philadelphia Eagles and New York Giants, it wasn’t enough to beat the Presidential debate.

According to ShowBuzzDaily, the NFL’s Week 7 opener between the Philadelphia Eagles and New York Giants saw 8.18 million viewers watch the Thursday Night Football game. Meanwhile, per TV Line, the presidential debate had 23 million total viewers across ABC, CBS and NBC.

While it was a 20% dip from the numbers for the first presidential debate, it still easily dwarfed the NFL. The 8.18 million viewers for FOX and NFL Network also represented a steep decrease from Week 5, when more than 14 million watched the Tampa Bay Buccaneers face the Chicago Bears.

Of course, the results aren’t surprising. The NFL likely expected it wouldn’t fare well against the final debate between President Trump and Joe Biden, especially with the election closing in. Getting crushed by the debate in terms of ratings.

While the NFL will benefit from no longer having to compete against any more presidential debates moving forward and the 2020 election will soon be over, the ratings for Thursday Night Football have left something to be desired this season.

Thursday Night Football has never been the most popular package for NFL games among viewers nor teams. The short week often creates a lesser product and with league rules requiring all 32 teams play at least once on primetime, the matchups are often underwhelming.

The addition of streaming and FOX is significantly helping the NFL and that partnership will continue moving forward. Amazon renewed its streaming rights with the NFL for TNF and FOX is discussing a new record-breaking offer for expanded broadcasting rights for future seasons.

Of course, the league must still deal with putting matchups that aren’t as compelling in this primetime slot. We’ll see another example of that in Week 8, but there will be plenty of must-see games after that on TNF.

While President Donald Trump has gone after the NFL before, his willingness to attack the league intensified this summer. With commissioner Roger Goodell beginning to support players who kneeled during the national anthem, President Trump quickly went after the league.

Trump vowed to boycott the NFL in June. As the league shifted even more towards social justice efforts and police reform, with more players promising to kneel, the President of the United States said he’d be very happy if the NFL season didn’t happen.

Given the direction the NFL was headed this offseason, the attacks weren’t surprising. Goodell expressed support for the Black Lives Matter movement, while admitting he didn’t handle the players’ demonstration correctly in 2016. In regards to Colin Kaepernick, with athletes like LeBron James wanting a direct apology, Goodell acknowledged the NFL should have listened to Kaepernick’s message.

While Goodell spoke out, the league itself and individual NFL teams took their own action. With more players demanding reform in the United States, focusing on the 2020 election and addressing inequalities, we saw significant movement. The NFL pledged $250 million to combat systemic racism and fans witnessed league-wide protests in Week 1, which have continued ever since.

The NFL’s decision to take action in the name of justice reform, after years of staying silent, has often been cited as the driving force behind the decline in viewership. While it certainly has played a role, MLB is experiencing greater pains and it took a far less active role in the movement.

The NFL isn’t alone in experiencing a dip in viewership and ratings, it’s been an alarming problem for MLB. Throughout the postseason, the average audience size for MLB broadcasts was down and things didn’t improve to begin the World Series.

MLB will only compete with the NFL once, on Sunday Night Football when Game 5 goes head-to-head with the Arizona Cardinals and Seattle Seahawks game. Given viewership was already down for baseball, the numbers will likely look even worse after Sunday night.