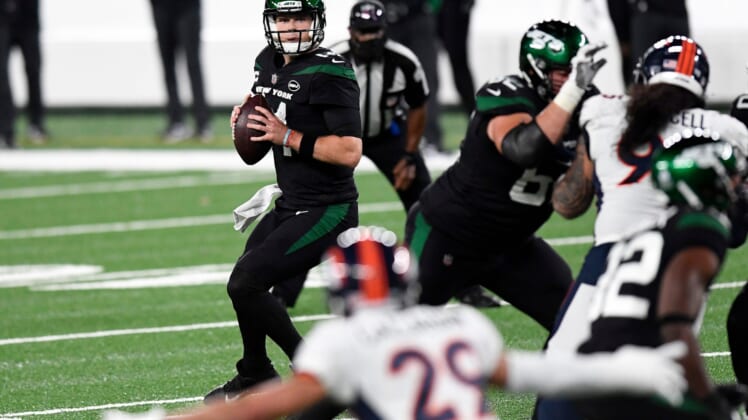 New York Jets quarterback Sam Darnold (14) looks to throw against the Denver Broncos in the first half of a NFL game at MetLife Stadium on Thursday, Oct. 1, 2020, in East Rutherford. Nfl Jets Broncos

The NFL ratings have been the biggest story of the 2020 season, even amid the COVID-19 pandemic. With Week 4 kicking off with an unappealing “Thursday Night Football” game between the Denver Broncos and New York Jets, the latest numbers offer another interesting looking at interest in the NFL season.

A week after 5.43 million viewers watched Ryan Fitzpatrick and the Miami Dolphins defeat the Jacksonville Jaguars, a clash between Sam Darnold and third-string quarterback Brett Rypien did fairly well for a “Thursday Night Football” game on NFL Network.

According to ShowBuzzDaily.com, Thursday’s game drew 5.4 million viewers and drew the largest audience on the night. While the NFL easily outdrew the MLB Postseason.

It’s a seismic drop from Week 4 of the 2019 season. The Philadelphia Eagles-Green Bay Packers game, broadcasted on FOX and NFL Network, drew 17.62 million viewers and a 10.5 rating. It was the most-watched TNF broadcast since 2015.

In 2017, the Packers-Chicago Bears matchup had 14.6 million viewers, with a combined audience from CBS, NFL Network and Amazon.

While the ratings are a gigantic drop from the marks the previous two seasons, the NFL adjusted its broadcast schedule this year. As a result, Weeks 2-4 weren’t broadcast on FOX or streamed on Amazon.

The NFL renewed its contract with Amazon for the streaming rights to “Thursday Night Football” in April. While it’s not known how much Amazon paid, Fox Sports gives the NFL $660 million per season under its current five-year pact to broadcast TNF games.

Amid a dip in ratings across all sports, “Thursday Night Football” has also taken a significant hit this season. A day typically saved to put some of the league’s worst teams on the national stage, the NFL’s worst ratings have come on Thursday night in 2020.

After a rough stretch of games on Thursday nights, things are about to improve. Tom Brady and the Tampa Bay Buccaneers will face the Chicago Bears in Week 5, a potential matchup between two of the best teams in the NFL. Best of all for everyone involved, it will be the first game this season broadcasted on NFL Network, FOX and streamed on Amazon.

While “Thursday Night Football” has performed the worst of the marquee games each season, we’ve also seen an NFL ratings dip on Sundays and Mondays.

Coming into Week 4, the television ratings for the 2020 NFL season have been a mixed bag for the most-watched sport in the country. While viewership is down compared to the marks the league enjoyed in 2019, the NFL stills owns every Sunday, Monday and Thursday on television.

When the week began, the NFL had the 15 highest-rated shows since its NFL Kickoff Game on Sept. 10. Some of the most-watched games weren’t even the only ones on when they aired.

It’s not only great news for the NFL, but networks will also take the returns. In fact, FOX is reportedly already willing to make the NFL a new record-breaking offer for the broadcasting rights to games in future seasons.

Meanwhile, ESPN wants to acquire the rights to future Super Bowls and the NFL is projected to receive $8-10 billion annually when it completes its new broadcasting deals with FOX, ABC/ESPN, NBC and CBS. Those projections also don’t include the money CBS and NBC paid for the additional playoff games, which will continue in the years to come.

However, it’s undeniable that viewership is still down for the NFL. While there have been some spikes, like the “Monday Night Football” game in Week 3 between the Chiefs and Baltimore Ravens, we’ve seen even more dips.

While more sports fans are streaming games this year, a trend that will continue in the months to come shows that ratings are down across the board. Of course, several important factors are at play in a year no one could have predicted.

Following the killing of George Floyd by a Minneapolis police officer, there was an instant change in the NFL. More players took part in protests, as the movement spreading across the United States, and the league took notice. But as the NFL shifted its direction, Trump also reacted.

NFL commissioner Roger Goodell expressed support for the Black Lives Matter movement and admitted he didn’t handle the players’ demonstration correctly. In regards to Colin Kaepernick, with athletes like LeBron James demanding an apology, Goodell acknowledged the NFL should have listened and the league pledged $250 million to combat systemic racism.

President Trump noticed the NFL’s actions. He blasted the most popular sports in the United States for allowing players to kneel during the national anthem. Amid the 2020 election cycle, with more professional athletes protesting against police brutality and systemic racism, Trump used the moment to go after the NFL.

He called the NFL “boring” in September, after vowing to boycott the game and saying he would be very happy if the season didn’t happen. After being accused of caving to Trump in 2016, the NFL planned to stand up against him in 2020.

Since that time, we’ve seen countless players and every NFL team take part in a demonstration. In addition to league-wide protests in Week 1, there have been several actions taken by clubs and players.

Dallas Cowboys owner Jerry Jones feared there would be a backlash from fans over protesting from NFL players. While it’s clearly made some impact on the NFL ratings, another important factor is also influencing viewership.

The NFL saw its ratings take a hit during the 2016 season, when it competed against the presidential election between Donald Trump and Hillary Clinton. With Trump and Joe Biden now in a heated race, we are seeing similar results this year.

Notably, “Thursday Night Football” will soon be competing against the 2020 election directly. With two upcoming presidential debates set on Thursday nights and many Americans expected to watch, there will likely be even fewer eyes for the NFL to grab.

Notably, “Thursday Night Football” will soon be competing against the 2020 election directly. With two upcoming presidential debates set on Thursday nights and many Americans expected to watch, there will likely be even fewer eyes for the NFL to grab.

With a new CBA signed and record-breaking television contracts on the horizon, the NFL will survive the looming financial hit this year. Once the COVID-19 pandemic and the 2020 election is behind them, the NFL should return to staggering profits.