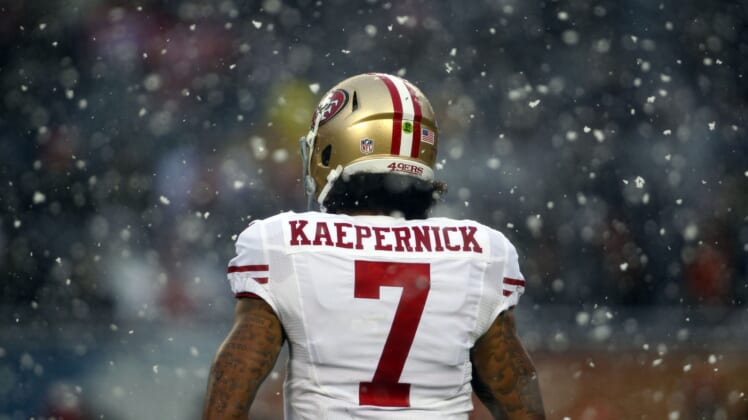 Just three years after Colin Kaepernick was kept out of the NFL for kneeling during the national anthem, commissioner Roger Goodell admitted the league got it wrong about player protests. Now, NBA star LeBron James is imploring the NFL to take it a step further with an apology to Kaepernick.

During an interview with Bloomberg Businessweek, James was asked about the progress the NFL has made by now supporting Black Lives Matter and pledging $250 million to combat systemic racism.

However, James also quickly pointed out that Goodell’s apology generally applied to all players who kneeled during the national anthem. While it’s a good start, the Los Angeles Lakers star believes the NFL must apologize specifically to Kaepernick, given he sparked the protests to raise awareness for police brutality and racial injustice.

“I have not heard a true, official apology to Colin Kaepernick on what he was going through and what he was trying to tell the NFL and tell the world about why he was kneeling when he was doing that as a San Francisco 49er,” LeBron James said, via Bloomberg Businessweek. “I just see that to still be wrong. Now they are listening some, but I still think we have not heard that official apology to a man who basically sacrificed everything for the better of this world.

The NFL settled a collusion lawsuit with Kaepernick in 2019. The settlement came following a grievance from the former star quarterback that NFL and its owners colluded to keep him out of the league.

Kaepernick has received an outpouring of support from current and former athletes in recent months. Hall of Fame quarterback Brett Favre recognized Kaepernick for sidelining his career to pursue an important cause, Tennessee Titans quarterback Ryan Tannehill changed his stance on Kaepernick after several years and Hall of Fame receiver Terrell Owens held an event to honor him.

Now with growing support for Kaepernick from across the league, things also seem to be looking up for his hopes of returning to the NFL.

Will Colin Kaepernick be signed?

The 32-year-old quarterback continues to train for a potential NFL return to this day and is said to be in the best shape of his life. Meanwhile, the tone around the NFL is becoming more positive towards Kaepernick and there is now increasing hope a team will sign him.

At least one NFL team has expressed interest in him and the Philadelphia Eagles are open to the possibility. In fact, per NFL Network’s Michael Silver, a couple of organizations are seriously exploring Kaepernick before training camp.

It seemed unlikely even a year ago that Kaepernick would ever return to the NFL. Given the changes going on across the United States, we might see him on the field this summer.